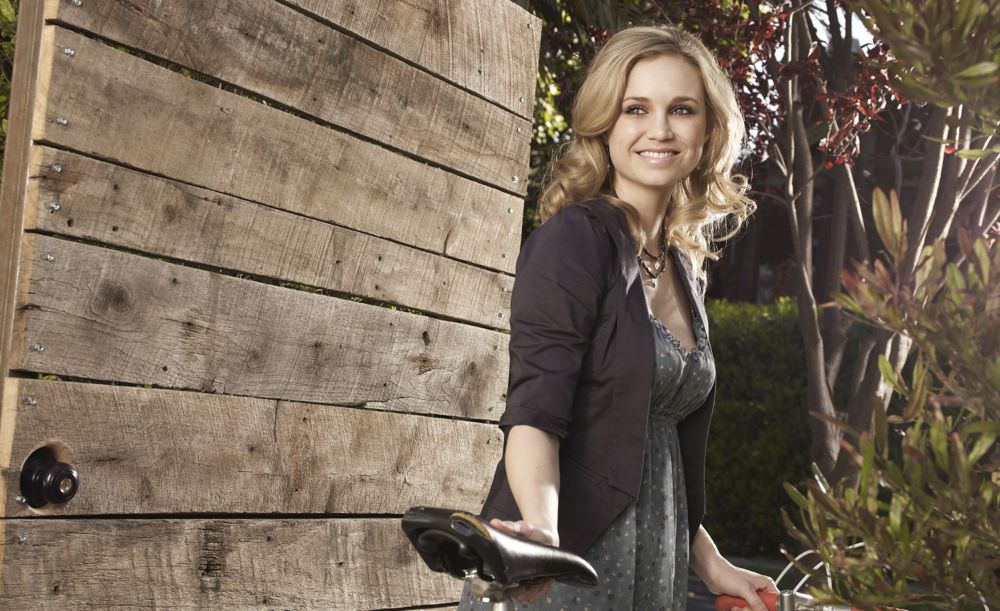 Gubelmann stars as Theresa, a young mother who reclaims her daughter Sadie after years of the young girl being raised by her malevolent paternal grandparents. While Theresa believes she is taking home her sweet little girl, Sadie is suffering from major emotional trauma that manifests in unexpected and often violent ways. The movie is a thriller in every sense of the word, and one of Gubelmann’s favorite projects to date. During a recent interview with Seat42F, Gubelmann talked about the joys of playing a mom, why she adores her young co-star, and her hopes for a second season of Telenovela.

Is Mommy’s Little Girl based on The Bad Seed?

Gubelmann: I don’t believe it is based on it. I actually never had the opportunity to meet the writer or speak with her, but I believe that it may be inspired by or influenced. I know we compare it a lot to The Bad Seed, but it’s not a remake.

What was your initial reaction when you read the script?

Gubelmann: I absolutely loved the script! I was actually on vacation when I got the script sent to me so I was in a really relaxed state of mind. Then when I read it, I just had so much fun and I couldn’t put it down. What I love most about it is it’s a fun thriller. What is cool about it is they found a way not to make it cheesy or unrealistic. They found the heart of the story, and I felt that everything in terms of Sadie’s character was motivated by true emotion as opposed to just like, this little girl is evil or crazy or demons are possessing her — which is fine because I like science fiction and horror movies, but I love that this story wasn’t that.

The grandmother character in the movie is absolutely terryfying…

Gubelmann: The actress who plays her [Deborah Grover] is brilliant because in real life she is the sweetest person. She is so much fun, just a bundle of energy, and I absolutely loved working with her, and yet she plays the meanest character.

How did Theresa end up separated from Sadie?

Gubelmann: Theresa was a young mother and she hadn’t made the best choices in life. She was drinking and kind of out of control, and shortly after she had Sadie, Sadie’s father passes away and she realizes that the best thing for Sadie is to have her raised by her paternal grandparents. She is trying to do the best thing for her daughter. Theresa has been a part of Sadie’s life while she was growing up, and she would still visit and spend time with her, she just wasn’t her caregiver. She knew she wasn’t reliable, she wasn’t in the best place and where the film starts, Theresa has finally gotten her life together and she is going to pick up Sadie and have her join her in her new life.

What was it like watching Emma Hentschel go into full Sadie mode?

Gubelmann: Watching Emma go into full Sadie mode was such a lesson in trust and just going for it when you are acting, and not hesitating on your impulses. As we get older we start to filter ourselves and question things, and she’s not at that age yet where she’s doing that. She hasn’t seen her work yet because this is the first big thing she’s done, so everything she did just came from a natural place and it was just great acting. That was a really great thing to see and learn from her.

It was so fun because she would have lots of questions for me and ask me lots of things, and often times the best way to learn something is to teach it. For me, when we would discuss things and I would help her work through things, or come up with ideas, it was just reinforcing the things I have learned through teaching her.

How does Theresa differ from characters you’ve played in the past?

Gubelmann: Well, first of all this was my first real experience playing a mother which was incredible. The bond I developed with Emma was so beautiful. I’m still in touch with her and her family. We had so much fun together, and I felt like a mother throughout the whole process. Acting with a child is just one of the greatest treasures you can have. She’s so truthful and real, and sometimes when you are acting you don’t get the opportunity to act with people who are being 100% honest and true. She was just coming from such a real place that it allowed me to come from that same place, and react moment to moment. In terms of acting, it was one of the greatest experiences I had ever had.

I would just say the lines to her and tears would just flow from my eyes because it was heartbreaking, and it was so easy to feel like I could open up and express myself. It was a safe place. I’ve worked with other kids here and there and it’s not like only kids are like that, Emma is so special and she brought that, it was so beautiful.

What is the one reason why people should tune into Mommy’s Little Girl?

Gubelmann: I think people should tune into Mommy’s Little Girl because it is a fun thriller that has a lot of twists and turns. I think it is different from the typical made for TV movie. It has heart and true motivation for the way things happen.

You were so great in Telenovela this season. If there is a Season 2 would you be open to going back?

Gubelmann: Oh yeah, if there is a Season 2 of Telenovela, I would love to go back. My character, Kelly, was so much fun to play. I often felt that she was such a gift from the writers, and it was one of the best experiences I have had on a show. I’m so grateful for the opportunity and again it was some of the most fun people I have worked with. Eva Longoria – I mean, wow, what an amazing, amazing woman. I have nothing but the utmost respect and admiration for her and her work.

What would you like to see happen to Kelly in Season 2?

Gubelmann: I think she could be kind of like Sideshow Bob or something like that where she just keeps popping up. I think it would be funny if maybe from prison she becomes a born again Christian and then somehow she creates some sort of social media fandom and then she ends up being on the telenovela as a crazy character who is just like an actor now because she made it through YouTube. It’s a little off, but I think because it is a telenovela it could totally happen.

If you could be on any show, which show would it be and why?

Gubelmann: In the past year I had the pleasure of working on some of my all-time favorite shows which were Mad Men, New Girl, and Modern Family. I’m currently a huge fan of The Grinder and Last Man on Earth, but I think ultimately my favorite show on Earth is Game of Thrones. If I could be on Game of Thrones, I think I would lose my mind.