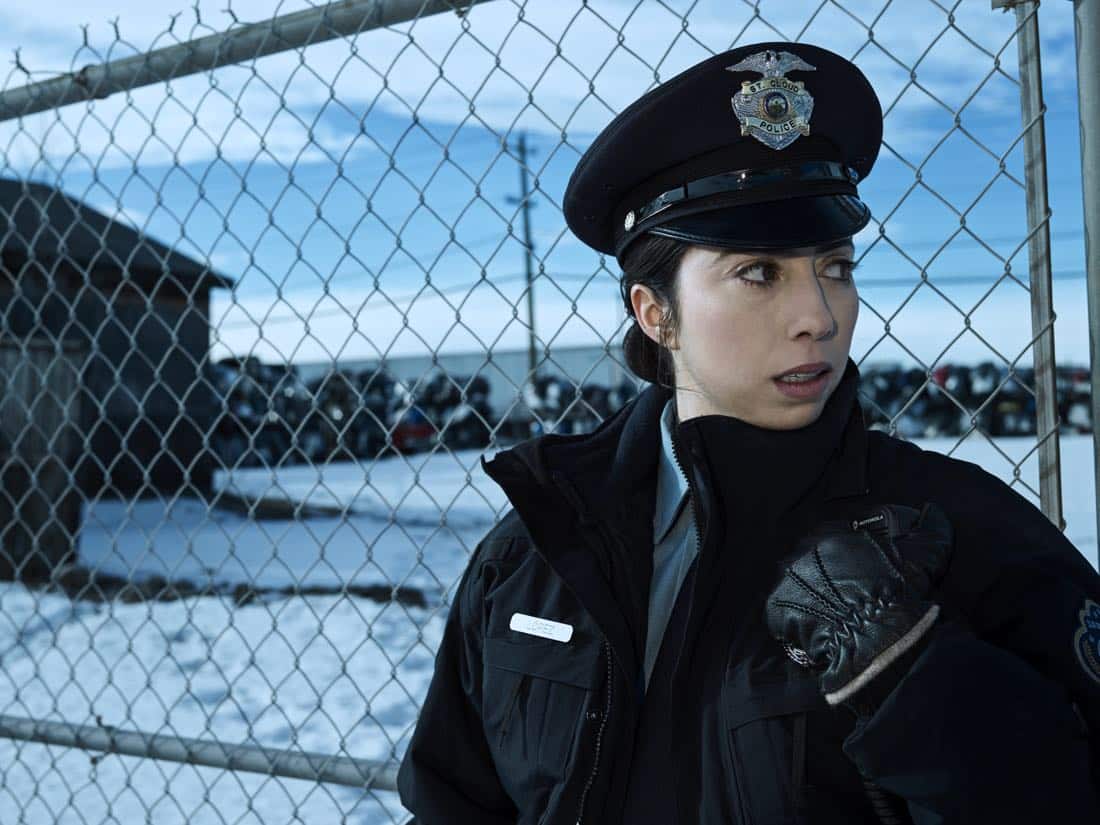 The FX drama series FARGO notoriously introduces the quirkiest characters to grace the televisions screen, and yet among the midst, there is always a character that radiates with a beating heart that manages to brighten up the screen with their presence and, this season, that character is Winnie Lopez. A beat cop who steadfastly goes through the day with an irrepressible sense of enthusiasm and confidence, Winnie is the one who everyone smiles for. Befriending the out of sorts Gloria Burgle (Carrie Coon) in the most unlikely of situations, the audience wanted to hug Winnie right along with Gloria. As portrayed by Olivia Sandoval, Winnie simply shines. Olivia is seamless in the role and makes us wish that there were many more episodes that we could savor her performance. In an exclusive interview, Olivia talks about the appeal of the role of Winnie and the delight with which she embraced working on FARGO, as well as the joy she feels where she is at in her acting career right now.

What initially appealed to you about the role of Winnie Lopez and working on FX’s FARGO?
OLIVIA: I instantly fell in love with her candor and her warmth. She is unpretentious and persistently optimistic, not to mention sharp as nails. And funny! Being trusted to play such a beautifully and clearly written character on such a respected show has been the greatest honor of my career.

How would you describe who Winnie is and her arc in this season of the show?
OLIVIA: She meets Gloria at the perfect time. When Chief Burgle hits her biggest wall, Winnie shows up to connect the dots. She offers a necessarily plucky contrast to Gloria’s world-weariness, and together they persist toward the truth, despite being overlooked and under-appreciated. I think they complete each other in a way, both professionally and in the subsequent friendship.

What do you most admire and/or like about her?
OLIVIA: Even though Winnie is a prime example of Minnesota nice, she is a ruthless detective at heart. Her happy-go-lucky exterior is a convenient distraction. Underneath she’s always studying the room.

What is it like working alongside such a talented ensemble, including Carrie Coon, Ewan McGregor, David Thewlis, Mary Elizabeth Weinstead?
OLIVIA: A dream come true, in the purest sense. I have grown as actor simply by sharing the room with such incredible artists. I felt so cared for during the process, and I will always be grateful for their mentorship and friendship. It was like going to grad school all over again. I am a seriously lucky woman.

Any favorite scenes that you got to work on?
OLIVIA: The elements of physical comedy in the bathroom scene were particularly fun, not to mention those amazing lines I got to say. “Putter-inner” is just one of my favorite things ever. The most special scene for me was definitely the bar scene with Carrie in episode 9. It was toward the end of shooting, and it was very emotional, both because we were saying goodbye to these characters, but also each other. I have such deep respect for Carrie’s craft. And Keith Gordon is wonderful to work with, he gave us space to play and it was a beautiful process. May just be my favorite experience as an actor to date.

What was your favorite part about working on this project?
OLIVIA: The people.

What has been the one thing you as an actor haven taken away from working on FARGO?
OLIVIA: I think back to something Shea Whigham said to me, “When they say action, it means relax.” You have to leave yourself room to be surprised while you’re working. Be playful. Listen. Okay that was more like three things. But they are all connected!

What do you hope viewers to take away from watching FARGO?
OLIVIA: Above all else, their own experiences. FARGO is meant to be digested slowly, and I think there are many ways to look at it. It is complex enough. Specifically I think the subject of power, and where it truly lies and the consequences therein, is pervasive throughout the season. And very appropriate for the times.

What was the biggest challenge working on FARGO?
OLIVIA: Most days contained something I did for the first time, so I was consistently challenged with something I had never done before, and it was all a joy. I never felt like I couldn’t ask a question, and believe me, I asked lots. It was an incredible learning experience.

What was the biggest surprise working on FARGO?
OLIVIA: I do not think I could have ever prepared myself in a million years for how much fun we had.

What did you learn from that experience?
OLIVIA: Every person on that set taught me something invaluable about the right way to behave as a professional in this business. I looked up to all of them. I wrote it all down. I reference it often.

What has surprised you most about your career so far?
OLIVIA: I still cannot believe how lucky I am to be able to do what I do. It has been a long journey and it has not always been easy. So if I were to say what has surprised me, it is that I somehow I still get to do this. I feel like I have won the Lotto. I’m incredibly grateful.

At this stage of your career, what do you think you have learned from the amazing variety of roles and projects you have worked on?
OLIVIA: I feel like it is just the beginning, and I have still so much to learn. If there is ever a time that I feel I have learned it all, it it time to quit. One thing I am particularly proud of is I have learned to love my face. Sounds odd, but there is so much pressure on appearance in this business and it took a lot of work to feel comfortable watching myself on screen. But I am a better actor for it.

If there were one role you would like to revisit, which would it be and why?
OLIVIA: I would be lying if I said it was easy to let go of Winnie. But I got to play Hamlet once and I have always wanted to go back. Gender norms be damned! It’s the type of character that reveals something new every time you experience it.

Do any of your characters and the situations they find themselves in ever leave a lasting impression on you?
OLIVIA: I would say that all my characters change me in some small way because if I’ve done my job well, they will teach me something I didn’t know about myself.

Has there been any great advice you have gotten? What advice would you offer to other upcoming and aspiring actors?
OLIVIA: It is a cliché, but for a reason: be yourself. Love yourself. There is a lot of pressure to conform, but the one thing you have to offer that no one else does is that no one else is you. Love your quirks. Love your flaws. They make you human and that is what this art is about, humanity. That was the best advice given to me, and that’s the best advice I can give. It is not easy. It took me years to learn that lesson. I was so hard on myself. But when it finally sank in, I started to let myself be seen in audition rooms. It changed everything.

Do you have any other upcoming projects that you can share that fans should keep an eye out for?
OLIVIA: I play upright bass in an Irish Americana folk band called Whiskey Sunday. You can see us play all around the Southern California area!

At a time when women’s voices are rising to be heard and respected around the country and world, what do you recommend your fans do to lend support in that endeavor?
OLIVIA: Do not be silent. If you see someone on the receiving end of misogynistic and/or sexist behavior, say something. Be an ally. The more we stay silent, the more we give permission to normalize something that is not normal. Women’s rights are human rights. It should matter to all of us.

To see where Winnie’s journey ends this season, be sure to tune in for the Season 3 finale of FARGO on Wednesday, June 21st at 10:00 p.m. on FX. Then to find out what is next for Olivia and to keep with her band Whiskey Sunday’s performances, be sure to follow her on Twitter: @just_sando_here

Here is to hoping we get to see a lot more of Olivia on screen soon!