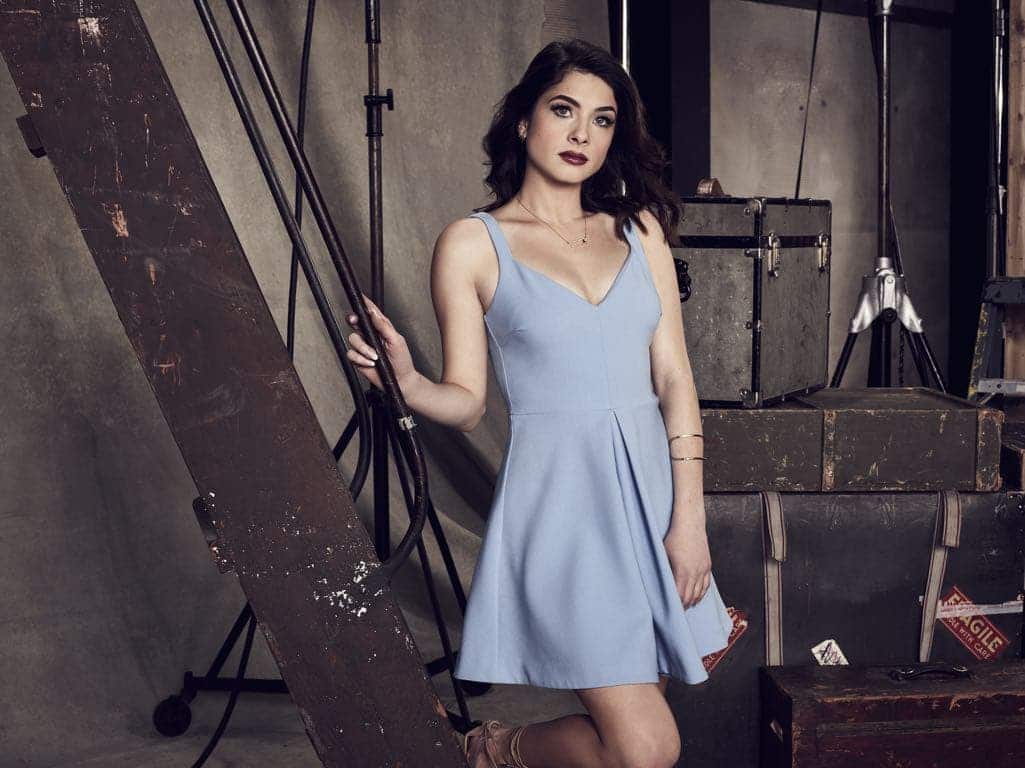 What is the price of fame? It is an age old question that no one can fully answer. But in Freeform’s new drama series FAMOUS IN LOVE, the price is high and seemingly never-ending. For young ingenue Paige Townsen (Bella Thorne), her life is swept up in a whirlwind of fame and romance, which quickly becomes a maelstrom as the boundaries of private lives and professional lives collide. For young actress Niki Koss, her character Alexis finds herself entangled in the lives of a Hollywood love-triangle that spirals out of control.  In an exclusive interview, Niki talks about the fun of working on FAMOUS IN LOVE and achieving a place of happiness in her acting career.

What initially appealed to you about the role of Alexis and working on the FAMOUS IN LOVE?
NIKI:  I originally read for a different character and remember reading the script and thinking “whoever gets to play Alexis is sooooo lucky.” I was in shock when they called me back to read for Alexis, but thrilled because she is truly so much fun to play. I had the most fun reading about her pilot storyline and could not wait to find out what she was going to do next.

How would you describe who Alexis is?
NIKI:  Alexis is a cunning, intelligent and calculated person with the exterior of a super glamorous movie star. She walks through life with confidence and does not let anyone ever step on her toes.

What can you tease about the secret Alexis is hiding?
NIKI:  It is steamy!

What do you most admire and/or like about Alexis?
NIKI:  I like that Alexis is never afraid to tell people how she feels. She cares about speaking her truth candidly and confidently, I will always admire her for that.

What is it like working with such a fun ensemble cast alongside Bella Thorne, Carter Jenkins, and Keith Powers?
NIKI:  My whole cast is AMAZING! Every time we are together it is like a love fest, we cannot get enough of each other. Everyone is so unique in their own way and so committed to who they are and what they stand for, it is so refreshing to be around that kind of energy.

How would you describe Alexis and Paige’s relationship?
NIKI:  Under construction, haha. Alexis and Paige do not really start off on the best note, I think Alexis is really threatened by her at first, but they have a lot more in common then they first realize.

What has been your favorite part about working on this project?
NIKI:  That is such a hard question…the first thing that comes to my mind is getting the scripts every week and that feeling I got in my stomach every time I saw a notification for a new episode. I also loved our table reads every week because everyone, cast, crew, writers, etc. all would come together and have lunch together in this huge conference room and read the script out loud, it was a blast.

What you have learned from the show and its thought-provoking question of: do stars have a right to privacy in their relationships?
NIKI:  That is a question I still do not know the answer to… I do not think I have decided within myself yet to be honest. Famous in Love has definitely gotten me to think about it way more than I normally would, that is for sure. I think the show did a great job of displaying the glitz and glamor, but exposing the not so glamorous side as well.

FAMOUS IN LOVE suggests that studio-manufactured relationships for bigger profits and viewership are real in Hollywood. Do you think that happens still? Should that kind of blurring reality and fiction be used for profits?
NIKI:  Everything in Hollywood is an illusion! Haha, but really I do believe that anything is possible in this town and there’s is a hugely blurred line that’s almost inevitable given the nature of the entertainment business. Chances are unless we are in the thick of it and are the celebrities themselves, we’ll never discover any of these hidden politics, manufactured relationships, etc., but I think that’s what makes it so fun and alluring. That’s also why you should watch Famous in Love… because it’s the closer look that we really don’t get to see very often.

What has been the one thing you as an actor haven taken away from working on FAMOUS IN LOVE?
NIKI:  This was the longest I have ever spent playing one specific character, which was not only a great experience for me as an actress, but also gave me a chance to really claim this character as my own.

What do you hope viewers continue to take away from watching FAMOUS IN LOVE?
NIKI:  I really hope more than anything that viewers have a fun time watching it. One of the things I love most about this show is it really lets you escape into a whole new world that we hardly ever get to see in that way.

What has surprised you most about your career so far?
NIKI:  I never expected to be on a show like this! Before FIL I had done mostly dramatic roles and projects, so it was refreshing and exciting to be able to delve into such a different genre for such an extended period of time.

At this stage of your career, what do you think you have learned from the roles and projects you have worked on?
NIKI:  I have taken so many different things away from every role and project I’ve worked on it would take me weeks to answer this! So far one of the lessons I’ve taken away just from my career trajectory in general is the harder you work the more results you see. I believe anyone can make just about any life happen for themselves if they work hard enough.

What are the perks of where you are in your career right now?
NIKI:  The occasional free stuff is great don’t get me wrong, but my favorite perk so far as been being able to have more of a choice in terms of projects I may or may not want to do.

If there were one role you would like to revisit, which would it be and why?
NIKI:  I once played a nerdy high school girl named “Jenny”, which was super fun and different. Usually I get cast as a mean girl or a angsty teenager, so getting to play a quirky, offbeat nerd was really cool.

Do any of your characters and the situations they find themselves in ever leave a lasting impression on you?
NIKI:  Some more than others, but every character I play leaves a lasting impression on me and goes with me for the next one to some extent. I think every character we create as an actor or a writer has to in some way or at least to some small extent, be an extension of who we are as a person.

Do you have any other upcoming projects that you can share that fans should keep an eye out for?
NIKI:  I am working on a feature film right now that I’m really excited about called “Burying Yasmeen” and I believe a film I worked on last year called “Warning Shot” should be coming out pretty soon!

At a time when women’s voices are rising to be heard and respected around the country and world, what do you recommend your fans do to lend support in that endeavor?
NIKI:  The time for girls to be catty to each other and bring each other down is over. We’ve stepped into a new era where women now need to encourage and support each other no matter what. We have to stick together or we will fall apart. It’s time for girls to stop hating on girls and it’s time to redirect that toxic energy into something positive.

You seem to be involved with a lot of charitable causes. Which are your favorites that you would recommend you fans get more involved with?
NIKI:  I would encourage people to get involved with a charity that supports a cause they are passionate about and feel a personal connection to. There are too many charities out there to support every single one, so it’s important to choose one that you will be excited to support and advocate for. I personally feel really passionate about homelessness in our country, our quickly deteriorating eco system and the neglect of animal rescue.

To see the expectations and cost of being young and famous in Hollywood, be sure to tune in for the premiere of FAMOUS IN LOVE on Tuesday, April 18th at 9:00 p.m. on Freeform.