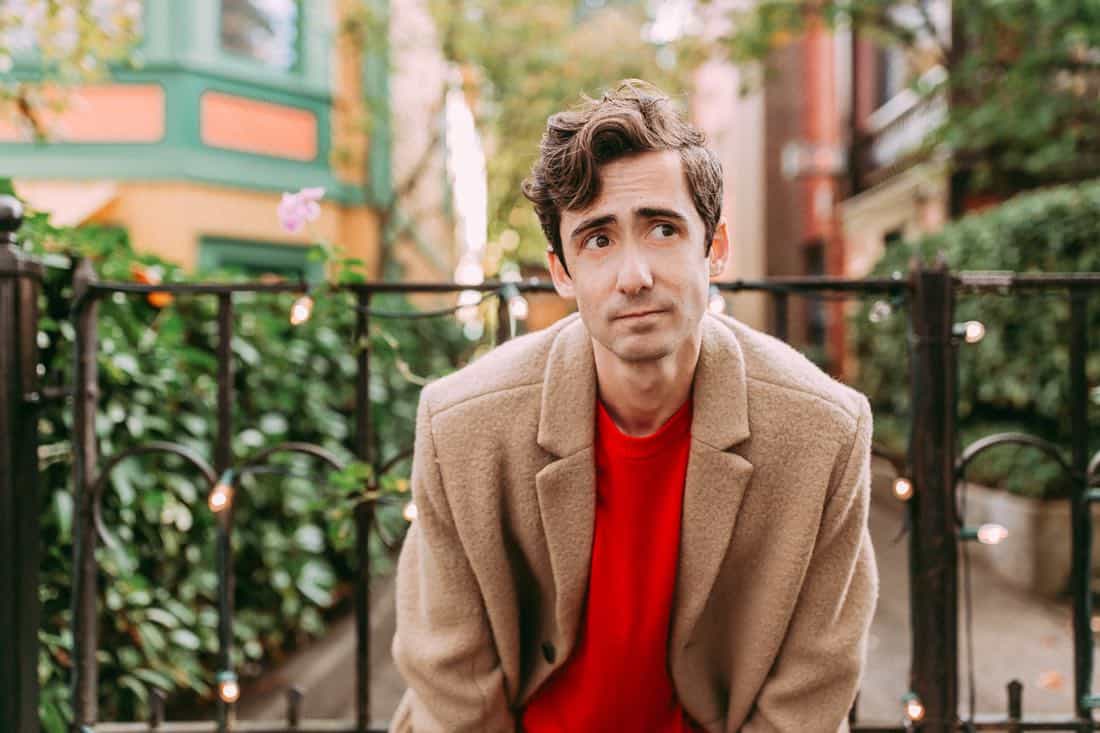 In the outrageous world of BBC America’s DIRK GENTLY HOLISTIC DETECTIVE AGENCY, based on the Douglas Adams books series, a large array of characters are set on different paths that incredibly all lead back to each other showing the interconnectiveness of everyone and everything in the universe. Jumping right into that jumble of characters and seeming chaos is Amitai Marmorstein, who portrays one of the Blackwing agents hot on the trail of Dirk Gently and all the wacky characters intertwined in these crazy adventures. It takes a skilled actor to not only roll with the chaotic stories, but who gamely and enthusiastically embraces it as part of his own professional journey. In an exclusive interview, Amitai Marmorstein teases a bit about the part he plays in the DIRK GENTLY adventures, and shares some of the lessons he has learned as an actor as he pursues its wondrous world of possibilities.

What initially appealed to you about the role working in BBC America’s DIRK GENTLY?
AMITAI: Paying my rent. joking, joking! I’d say the writing. It was so funny, right at first glance. Full of jokes, but not blatantly or as the top priority. There were just so many different ways to play it. I feel like Max’s creativity ends up firing up your own creativity. It’s a pretty cool process.

How would you describe who your character is?
AMITAI: His name is Lieutenant Assistent and he’s an agent at Blackwing, the nefarious government agency that’s hunting all the holistic characters. He’s Hugo Friedkin’s right hand man.

What do you most admire and/or like about him?
AMITAI: My main scene partner Hugo Friedkin (played hilariously by Dustin Milligan) is an idiot. So when I read the character I couldn’t stop thinking about this question that popped into my head, ”What would it be like to be an aide to a very powerful, but dangerously inept leader?” My character is put in the precarious position of not really being able to trust his boss’s competence, but also not having enough power or influence to really do anything about it. And I think the thing I admire about Lieutenant Assistent is how he keeps trying. What else can he really do? He has a certain responsibility as the not complete idiot in the room. And I think he genuinely doesn’t want anyone, including Freidkin, to get hurt. The dynamic is really quite fun to play.

What is it like working alongside such a talented ensemble on DIRK GENTLY? Who do you get to work the most with?
AMITAI: Most of my scenes were with the aforementioned Friedkin, which was awesome, Dustin and I had worked together on a little indie movie years ago, so it was cool to get to hang out and play around with him again. I also got to work a little bit with Mpho Koaho, who plays Ken, brilliantly. He’s got a great arc this season, watch out for that. And then later on I have a few scenes with Dirk himself, which was honestly just a joy. Sam is so talented and such a kind, honest person that we became pals pretty much immediately.

Any favorite scenes that you got to work on so far?
AMITAI: There’s a couple in the final episode of the season that were pretty crazy to shoot. I don’t want to give too much away, but by that point everything is more or less completely out of control. There’s lots action, and while I don’t get all the way involved, it was a lot of fun to watch the stunt team do their work. I still have no idea how my performance turned out because I was kind of too busy just reacting to all the crazy stuff happening around us.

Then what is your favorite part about working on the show?
AMITAI: Honestly, I just love going to work. As an actor, it’s not something that is ever guaranteed, so I don’t take it lightly. Every morning that I’m driving to set at some god-awful early hour, bleary eyed and often a bit lost, I’m honestly as happy as I’m capable of being.

What has been the one thing you as an actor haven taken away from working on DIRK GENTLY?
AMITAI: I always try to learn as much as I can from the actors I work with, especially the ones that I’m such a fan of. There was something Dustin mentioned to me at one point, something that Max had actually told him earlier: “New acting feels like bad acting.” Basically the idea is that when you discover something new it can often feel strange and unfamiliar, compared to what you’ve rehearsed and prepared. But those new things, the novelty of them, are the most compelling things to watch. So I guess my takeaway is to trust myself to find and discover things in the moment, even if it’s not as comfortable.

What do you hope viewers to take away from watching DIRK GENTLY?
AMITAI: I hope they have a good time, first of all. I think the mystery this season is extremely clever and I’m excited for the audience to experience those clues and reveals as the season unfolds. But also, I hope they can appreciate and maybe even relate to the characters on the show. They are all such original, weird, yet fully rendered souls that I feel like if you look closely enough you can really begin to understand them and love them, all of them.

What is the biggest challenge working on DIRK GENTLY?
AMITAI: Well, I’m not a crazy big fan of block shooting. Block shooting is where you shoot more than one episode at once, to save time and to cut back on having to move locations all the time. It’s a necessary evil. But it can also be pretty disorienting. It’s fairly standard practice, to be honest. And with Dirk we were only shooting two episodes at a time, which isn’t that bad.

What is the biggest surprise working on DIRK GENTLY?
AMITAI: Just how cool and down to earth everyone has been. I guess that shouldn’t really be a surprise but you know how it is, you watch these actors on screen doing their thing, you see all the brilliant writing and you can sorta mythologize them. So actually getting to know them as people has been really great.

What has surprised you most about your career to date?
AMITAI: Every time I get another job, I feel pretty surprised. There are some real bad voices in the back of my head who love to say stuff such as “You’ll never work again” or “What the is wrong with you? Why are you trying to pull off this crazy dream? Are you delusional?” I’ve gotten better telling those voices to chill, but honestly nothing works quite as effectively as getting a call from my agent telling me I booked a new part.

At this stage of your career, what do you think you have learned from the amazing variety of roles and projects you have worked on?
AMITAI: Probably just that there’s really no formula to any of it. Every new role, every new project is gonna require something different than the last. And I could pretend that I have this big wealth of knowledge, but the truth is the more experience I have, the less I realize I know. And that not knowing isn’t necessarily a bad thing.

Then what are the perks of where you are in your career right now?
AMITAI: For the first time, I’m actually getting to play characters my own age. I have a very youthful face so for years I was going out for high school-aged or younger characters. I didn’t mind it, and if someone still wants to cast me in something where I’m a teenager, I won’t necessarily say no. But it’s nice to be able to let my beard grow out for an audition or two.

If there were one role you would like to revisit, which would it be and why?
AMITAI: There’s this play I did called “Legoland.” The first time I performed it I was a teenager, still in theatre school. The play became a hit of sorts and, off and on, over the next 10 years we performed it across Canada, in Seattle, and in New York. We even did a run in the Yukon. There was something about getting to keep revisiting the character over and over again, especially through such formative years of my life. I was changing and growing, so the character would invariably change and grow as well. And now he feels like a dear friend I’ve know since my school days. So I guess to answer your question, I would jump at the chance to revisit pretty much any character I’ve played. It’s just such a great opportunity to see them from a new perspective.

Do any of your characters and the situations they find themselves in ever leave a lasting impression on you?
AMITAI: They do. I notice it more when I’m doing theatre. I think it’s because you have to do the whole performance over and over again, night after night. But if I’m playing a character who goes through some trauma I find it can take me a while to let go of it. Acting is such a weird thing. We trick our minds and our bodies into thinking something is happening to them, something that, in reality, is completely imaginary. Yet our bodies and large chunks of our minds don’t really understand the difference. They often experience the trauma regardless of how imaginary it is. So I think it can take time to let go of those things sometimes, to decompress. Often weeks or even months. I just realized your question could have easily been interpreted as an opportunity to talk about the positive impressions a character might leave! I went dark with it!

Has there been any great advice you have gotten? What advice would you offer to other upcoming and aspiring actors?
AMITAI: Some actual valuable advice I received was that the key to career longevity isn’t talent, it’s temperament. Of course talent is important, but there are countless extremely talented former actors that just can’t handle the ups and downs of an acting career. It requires a certain temperament to survive it.

Are you actively involved with any charities. Which charity do you work with most? And which would like to see your fans become more involved with and support?
AMITAI: I don’t know if I’d say I’m “actively involved” aside for contributing money but my brother spent a lot of time working with a really great organization called Hoops 4 Hope. They go into communities in developing countries in Africa and use basketball camps as a platform to teach life skills. It’s a pretty cool, clever way to take the values and allure of sports and apply them to kids lives.

Do you have any other upcoming projects that you can share that fans should keep an eye out for?
AMITAI: The main project I should mention is the new Arnold Schwarzenegger movie “Killing Gunther.” It was written, directed and starred in by SNL alum Taran Killam. It’s a mockumentary about hitmen and hitwomen, trying to track down and kill the top hitman in the game. It’s super funny and Arnie is hilarious in it. I play the documentary director. It’s out in select theatres now, but also available on iTunes and VOD, Check it out. I promise you’ll laugh.

To see just where are these zany stories finally culminate this season, tune in for all new episodes of DIRK GENTLY on Saturday nights at 9:00 p.m. on BBC America. Then to find out more about Amitai Marmorstein’s upcoming projects be sure to follow him on Twitter: @AmitaiMars