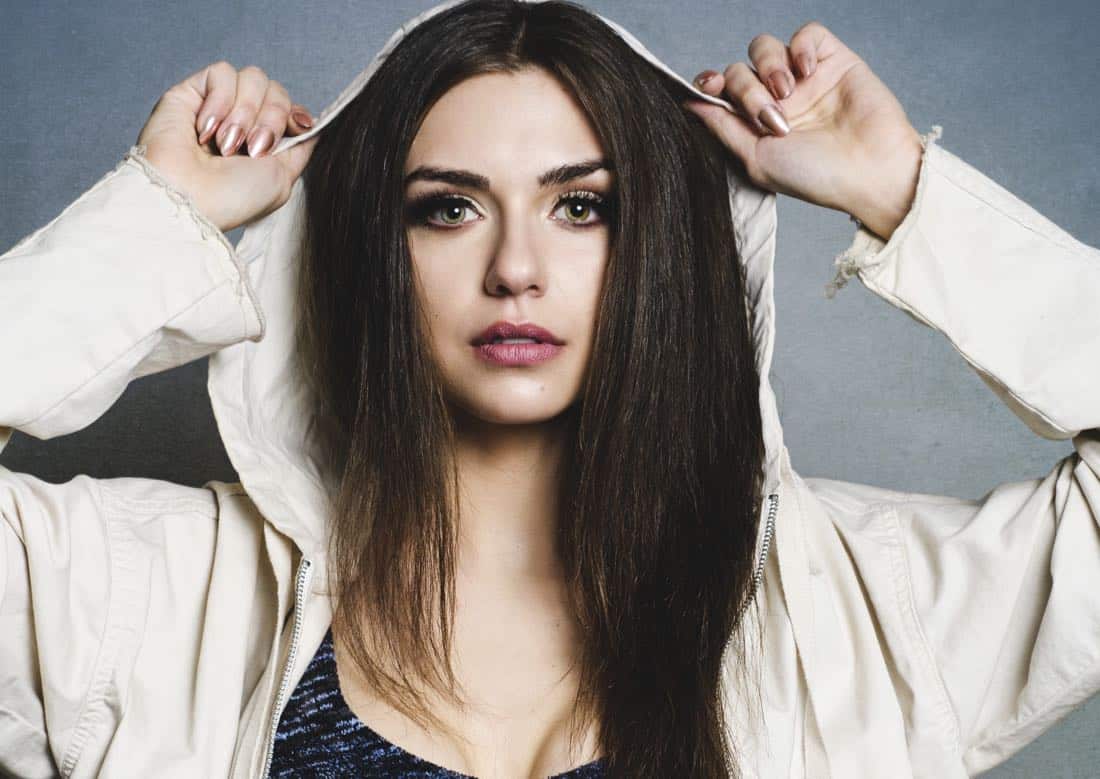 Landing a successful soap opera role so quickly in Hollywood is a dream come true and it felt like Victoria Konefal got her fairytale wish granted as she stepped right into the shoes of the delicious role of Ciara Brady in NBC’s DAYS OF OUR LIVES. After appearances in the Lifetime films “The Wrong Crush” and “Deadly Exchange” and a quick guest appearance in ABC’s MODERN FAMILY, Victoria seemed to score her DAYS OF OUR LIVES role quickly and easily. But as Victoria explains in this exclusive interview, it only seemed that effortless as the work of carving out a career is much more than the result of good timing — it requires dedicated effort to secure an acting role as each presents.

What was the initial appeal for you about portraying Ciara Brady and working on DAYS OF OUR LIVES?
VICTORIA: I was eager to take on a new experience. I’ve never been a leading character in a TV show before, let alone a soap opera. The fact that it was unknown territory for me made it incredibly exciting and challenging.

How would you describe who Ciara is?
VICTORIA: Ciara is a force to be reckoned with. She doesn’t let people walk all over her, and that’s a really redeeming quality to me. It’s important to learn how to stand up for yourself and not be timid when it comes to your happiness and wellbeing, and Ciara really embodies that.

What do you most admire or like about her?
VICTORIA: I admire Ciara’s emotional resilience. She has been through a hell of a lot at such a young age and she continues to be a strong bright young lady.

As this was a role previously portrayed by Vivian Joviani, what challenges did you encounter and how did you conquer those challenges to make the role your own?
VICTORIA: I didn’t want to psych myself out and overthink the situation. I just came into the role with a fresh mindset and made the character my own, while still trying to keep her personality traits that were set by Vivian. I mainly discussed where Ciara was headed with producers and we figured her out together.

What would you say is the difference in your version of Ciara versus Vivian’s portrayal of the character?
VICTORIA: I honestly haven’t seen Vivian’s portrayal. My acting coach and I agreed it would hinder my performance if I subconsciously filled my head with everything she said and did. It wouldn’t have been authentic to who I am as a person and as a performer.

What do you bring to the role?
VICTORIA: I bring a lot of spunk and energy to Ciara. I also bring loud New York vibes to her, naturally since I’m a born and raised New Yorker.

What was it like working alongside the talented ensemble on DAYS OF OUR LIVES?
VICTORIA: It has been such a pleasure working with the Days cast. Everyone is incredibly talented and I learn so much just by watching them work. I’m truly blessed.

What has surprised you about working on DAYS OF OUR LIVES?
VICTORIA: I was surprised with how much material we cover in such a short amount of time. Never in my wildest dreams did I imagine it was possible to shoot 30 pages a day, but on the Days set that’s the total norm.

What are you most proud of about working on DAYS OF OUR LIVES?
VICTORIA: I’m proud of being on a show with so much standing and history. The show holds a special place in the fans hearts, and that’s an amazing thing to be a part of.

Then as an actor, what has been the one thing you haven taken away from the experience of working on DAYS OF OUR LIVES?
VICTORIA: The work ethic that’s being instilled in me throughout my time here. With our busy shooting schedule, I have to take on a lot of material at once and it really works out my acting muscles.

What has surprised you most about your career so far?
VICTORIA: I’m surprised with how fast everything is going! I moved to Los Angeles 2 1/2 years ago, and I thought I would have to wait longer before things started picking up for me.

What is your proudest achievement from your career so far?
VICTORIA: Getting pre-nominated for an Emmy! I’m not officially nominated but being pre-nominated is such an honor. At the time of pre-nomination only a month of my material had aired so I didn’t have much for the committee to consider.

Then what are the perks of where you are in your career right now?
VICTORIA: I get to have a steady job, and my job is doing something every day that I would do for free, so I would say my career is a perk in itself.

If there were one previous role you would like to revisit, which would it be and why?
VICTORIA: It would probably be my role from the first movie I ever shot. I played a psychopathic killer named Georgia Paige. I really got to let go and have fun with the character.

Do any of your characters and the situations they find themselves in ever leave a lasting impression on you?
VICTORIA: The situations that I can relate to on a personal level usually end up leaving an impression on me. The emotions from the character were casted from such a raw place in those situations, so they definitely end up being memorable scenes.

Do you find any of you character’s habits manifesting in your own life? Like what?
VICTORIA: Ciara is younger than I am, and even though she shows great strength, she is immature. That’s something I can’t identify with, but as Ciara grows, I’m sure we will start having similar habits!

Has there been any great advice you have gotten about working as an actor?
VICTORIA: Always show up on time! That’s pretty much the rule of thumb for everything, but you never want to be the late one on set.

What advice would you offer to other upcoming and aspiring actors?
VICTORIA: Never stop trying. If you want it bad enough, you better make it happen for yourself. Life is such a beautiful thing and it’s a shame to waste it doing things you aren’t passionate about, so you might as well fight hard for what you love.

At a time when women’s voices are rising to be heard and respected around the country and world, what do you recommend your fans do to lend support in that endeavor?
VICTORIA: True change happens one heart at a time. You can’t let yourself fall victim to the “bystander” effect. The thought process of: “If she says it, I don’t have to” is harmful in so many ways. It’s harmful to society as a whole and it harms the confidence of the individual. If you don’t feel confident enough to speak up about important matters, how are you going to feel confident in life? You may think you aren’t being heard but every voice matters, we just have to do it together. Women are strong on our own but together we are unstoppable.

Do you have any other upcoming projects that you can share that fans should keep an eye out for?
VICTORIA: For now, I’m in a contract with DAYS, so I don’t have much time for other projects, but my agents are keeping their eyes peeled for any projects that don’t clash with my shooting schedule!

To see more of Victoria’s luminous performance as Ciara in DAYS OF OUR LIVES, tune in for all new episodes weekdays at 1:00 pm on NBC. More information about the show can also be found on Twitter @NBCDays and to see where Victoria’s adventures take her next, you can follow her on Twitter @VictoriaKonefal.

Victoria Konefal on the red carpet at City Gala 2018: