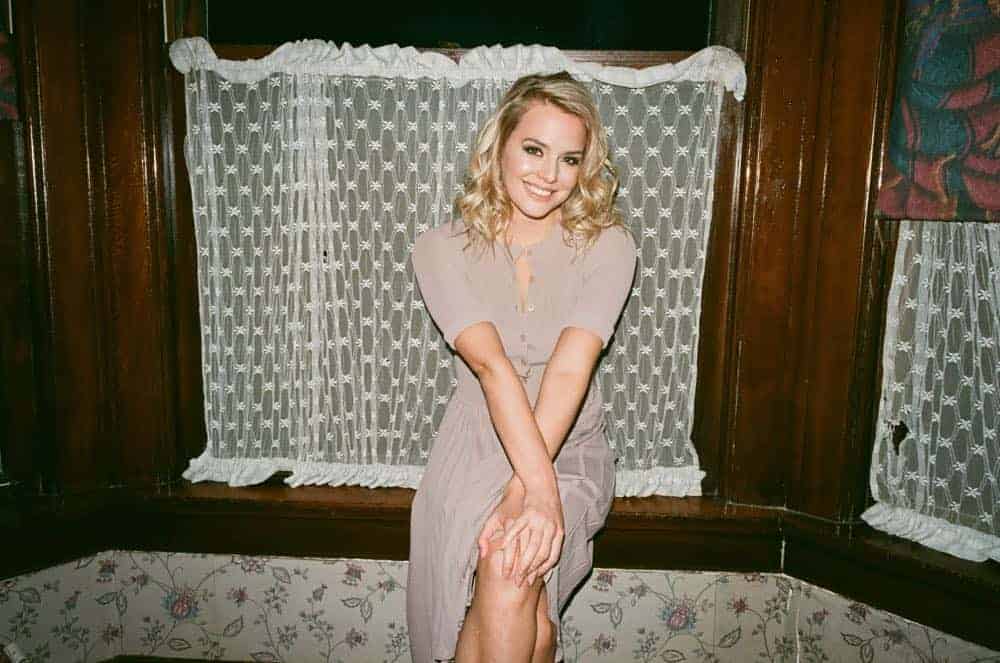 With a career that is just beginning to soar, Jocelyn Panton is happily bringing a fun array of characters to life on screen. Whether it is co-starring in a camp-horror like “Critters: A New Binge” or guest appearing on a dramedy like the CW’s LEGENDS OF TOMORROW or a cameo on the CBS All Access drama series THE TWILIGHT ZONE, Jocelyn stands out. Life is not about what roles come your way, but rather what you do with it to make the role stand out and Jocelyn’s pure love of her characters invites viewers to love them too. In an exclusive interview, Jocelyn talks about getting to be a part of the “Critters” world and reflects on the amazing roles that have been coming her way.

What was the initial appeal of portraying Ellen Henderson on “Critters: A New Binge”?
JOCELYN: Knowing that it was a continuation of the 80’s franchise– the fun and cheesiness of it all. And also, what’s not to love about those small, cute, monstrous creatures?

How would you describe who Ellen is?
JOCELYN: Ellen is the main reporter in town. She’s on the lookout for that one story that’s going to be her big break. Then one day she gets caught up in all this mayhem, and goes on this wild and fun ride.

What do you most admire about her?
JOCELYN: She loves what she does and I would say she’s quite brave but more in a naïve, eager kind of way. I think it’s funny and endearing. She’s so into what’s going on and getting caught up in the excitement of it all that ‘survival’ and fear don’t even phase her.

What kinds of challenges does Ellen face in “Critters: A New Binge”
JOCELYN: Without giving too much away, I would say that her adrenaline is probably too high to even realize that she’s in the middle of a life or death moment. Also, she gets to do something badass in her own sort of adorable way.

What was it like working alongside Toby Levins and Alison Wandzura on “Critters: A New Binge”?
JOCELYN: Oh they are both so awesome. Toby and I actually hung out a lot between takes in the tent and had a lot of discussions about our careers. He’s so lovely and also really inspiring. I’ve known Alison for a few years from us both being based in Vancouver. I would see her at the same events and we have some of the same friends so it was a real treat to get to work with not only a familiar face but also an all around awesome person.

Has there been anything that has really thrilled you while working on “Critters: A New Binge”?
JOCELYN: I think knowing this was a continuation of an already awesome film franchise. I hadn’t really watched too much of Critters before so to learn what the big fuss was all about. They have so many fans and I can see why! It’s so much fun.

Have there been any challenges that have you had to work with that the show still managed to pull off?
JOCELYN: Yeah, and I love me a good challenge. I remember being in a couple of amazing and complicated scenes where there were about a hundred actors/background being filmed in one continuous shot. It required me to focus and stay really on the ball. Also, I have a background in broadcasting and it’s not every day in my acting career that I get to draw on that old training so to be able to get to do that was a ton of fun and kept me on my toes.

What has surprised you about working on the show so far?
JOCELYN: I would say the community around the franchise. I don’t know how many shows there are that have this many fans still engaging together after this many years. I love it.

What do you think you have learned from working on “Critters: A New Binge”?
JOCELYN: Sometimes you can worry about the pressure– for example those big scenes we shot, but as always to stay in the moment, see what happens, make new discoveries with each take and what I love most about acting when I surprise myself. To let go and just see what happens.

You also appeared on the series LEGENDS OF TOMORROW as Marilyn Monroe. What did you appreciate about that role and working on the show?
JOCELYN: Well, I felt like it was such an honor to play such an iconic, beautiful woman — both inside and out. And not only that, it’s on an awesome show with an amazing cast and crew. To be in another wild and fun storyline, I feel so lucky. But they really also made me feel like family since day one. And also, Marilyn will be back for another episode so that was a nice surprise.

You also appeared in “A Gingerbread Romance.” What can you share about that role and experience working on that film?
JOCELYN: That was my first supporting lead, first Hallmark movie, and first Christmas movie. There were so many firsts, so I think it will always be special to me for that. Also, working alongside Tia Mowry-Hardrict, who I used to watch on SISTER SISTER back in the day. She is so amazing and also being able to work with Duane Henry… it was such a great experience — they are both wonderful people. And to top it off we were surrounded by life-sized gingerbread houses, candy and pies — you can imagine how tempting being on a set like that was!

At this stage of your career, what do you think you have learned from the roles and projects you have worked on?
JOCELYN: The biggest thing I keep learning is there is so much more to learn. The moment I realize I’m really good at something I realize that I have so much work to do somewhere else or that even where I am really good — I can always push myself further. I think that’s also what I love about acting- the constant challenge of it, if never gets boring.

Then what has surprised you most about your career so far?
JOCELYN: Probably how long it’s taken me to get to where I am. Being in this career requires you to grow so much as a person so it’s both rewarding professionally and personally. I think if you asked young me 10 years ago, I would have thought it would only take 1 or 2 years to get to this point. This career has taught me the value of working hard and being patient (all good things come with patience!). And I am so so grateful.

What are the perks of where you are in your career right now?
JOCELYN: Oh it feels so awesome to be like, yeah I have 10 years under my belt now and I can give new people some valuable advice. There’s a confidence in that and such a joy to acknowledge that I’ve been in this for that long (although that’s nothing compared to how long many others have been doing it). I feel like I carry a self assuredness that I didn’t have when I first started out and that feels so good.

What has been your proudest achievement as a working actor at this point in your career?
JOCELYN: There are too many to name! Last year was my best year as an actor, I had the most amount of roles I’ve ever booked and the biggest roles I’ve ever booked. Playing Marilyn will ALWAYS be something I’ll be incredibly proud of and to have the year I had after so much hard work for a long time made me feel incredibly proud. But, I do have to say that some of my most proudest artistic achievements have taken place training with my in class. I’ve gotten to play super challenging characters from amazing plays. How hard they were in the beginning and how hard I was pushed to be better, that the end product felt like such a huge achievement and I felt so great about what I did and recognizing I did that! Seeing myself go from one level to another greater level makes me feel so proud of myself.

Has there been any great advice you have gotten about working as an actor?
JOCELYN: Yes, I was once told by a very seasoned actor, Colman Domingo, (Fear the Walking Dead) that I just have to stay in the game and someday it’ll pay off, just stay in the game. I wholeheartedly believe that and I’m seeing it happen. There are hard years where you wonder if this will ever pay off but realizing that this is really the thing I want to do the most so even if it doesn’t “pay off,” it’s still worth it. But that being said, there definitely are days that you wonder and go down that rabbit hole. The advice seems so simple, but the beautiful thing that happens if you just stay in is that you realize where you need to grow and you work on that and you realize what else doesn’t work and you do something about it.

What advice would you offer to other upcoming and aspiring actors?
JOCELYN: The exact advice I was given: stay in the game. Find someone or a project that inspires you to your core. Those are the best for the hard days when you need a good reminder of why you’re doing this. That and one more thing, get in a really good class and train hard.

At a time when women’s voices are rising to be heard and respected around the country and world, what do you recommend your fans do to lend support in that endeavor?
JOCELYN: Let’s all be better listeners and believe more. This is the first time in who knows how long or if ever that women are being heard in a way they were never heard before. So many people feel like we’re alone. If more people listened to us, we will speak more, and if we speak more, we’ll realize that we are not alone and to know that someone has been through what we have. Let’s also take advantage of this amazing time that we’re in accomplishing our dreams. We have more opportunity now than we did before.

Do you have any other upcoming projects that you can share that fans should keep an eye out for?
JOCELYN: Yes, I’m at the beginning of the two-part season finale of DC’s LEGENDS OF TOMORROW as Marilyn Monroe again coming back in a couple of months. Also, keep an eye out for the soon to be released (April 1st) first episode of THE TWILIGHT ZONE. I have a cameo appearance in it. It’s a small cameo, but to be on another reboot such as THE TWILIGHT ZONE, I feel so lucky.

All episodes of “Critters: A New Binge” are available to stream exclusively on Shudder (https://www.shudder.com/series). To follow Jocelyn’s career and her endeavors, be sure to follow her on Twitter @JocelynPanton.