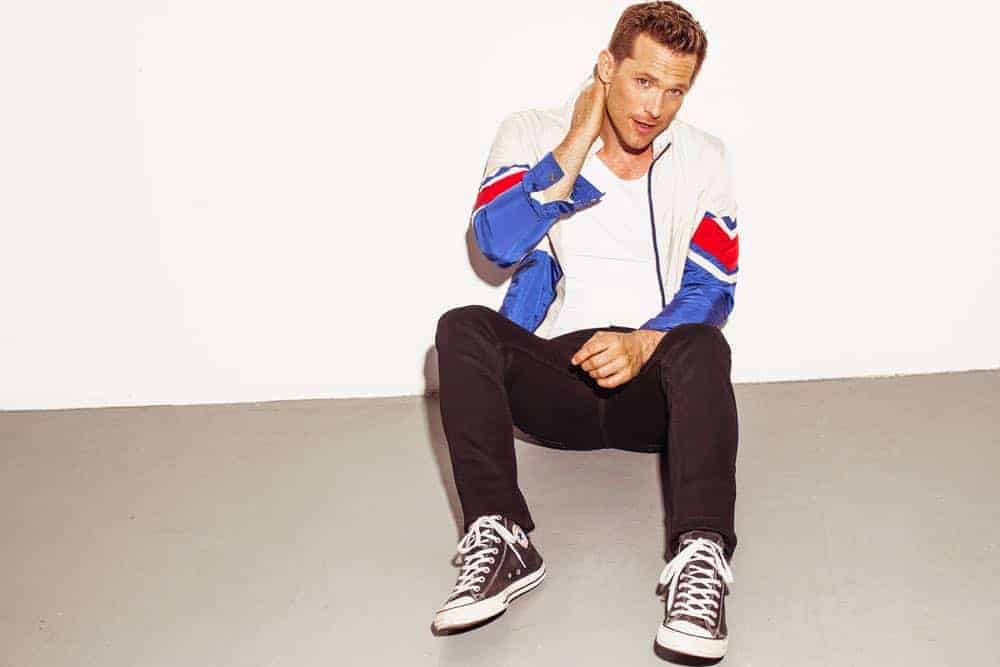 In the comedic Canadian series CRAWFORD, the lives of an unconventional family are infused with a bit of quirky circumstances involving the discovery of raccoons living in their home. Their unique, loving familial outlook allows them to welcome others into lives, including the mother’s lover Bryce, portrayed by Chad Connell. Chad’s career has allowed him to portray a myriad of characters, such as he recently portrayed a vampire on SHADOWHUNTERS, a doctor in MARY KILLS PEOPLE, and in CRAWFORD, a man content to be happy and share his innate happiness with those around him. Chad, like the Crawfords, seems happiest when pursuing a life worth living. In an exclusive interview, Chad talks about the fulfillment he has found working on CRAWFORD and the unique perspective it has afforded him as an actor.

What was the initial appeal for you about portraying Bryce and working on CBC’s CRAWFORD?
CHAD: It’s nice to get the chance to play someone who is so upbeat about life and earnest. With some roles there can be the concern that elements of the character could seep into your life — but with someone like Bryce, that would be totally welcome.

How would you describe who Bryce is in the series?
CHAD: Bryce is pretty enthusiastic generally, but he can also be defined by his love of three things: Cynthia [Jill Hennessy], his dogs and U2. It totally doesn’t bother him that his girlfriend has a husband, and I think Bryce really just wishes he could find a way to befriend him. I’d say that’s pretty good insight into what an open guy he is. Plus, he doesn’t go anywhere without his two labs, Tulip and Molly. Actually come to think of it, it’s totally fitting he has labs, he’s like a lab himself!

What do you most admire about him?
CHAD: I’d have to go back to his enthusiasm and energy again. Bryce is not the type of guy who stares at Instagram for an hour before getting out of bed… I could use some of that in my own life.

What is it like working alongside Jill Hennessy, Alice Moran, Kyle Mac, and John Carol Lynch on CRAWFORD?
CHAD: Most of my work was with Jill and John and that opportunity was such a treat. For all their experience, they’re both so kind and collaborative. While I got to see the others at cast hangouts or the lunchroom, we weren’t really on camera together much. So when I saw their final performances it came as a total surprise. The talent in this show amazes me. Kyle is great and Alice is hilarious—she has a very specific and unique way of delivering lines that only she can make work so well. And the supporting performances are so committed and brilliant.

How would you describe the dynamic between Bryce and Cynthia?
CHAD: I think that this relationship is really only complicated for Bryce. He knew it wasn’t a good idea, but he just can’t help it because he feels emotions so deeply. Once he feels that way, he just can’t change it. Cynthia is a married mother of three and a high-powered cereal company executive so I think it is a tough realization for Bryce that he doesn’t place too high up on her list.

Any favorite scenes that you can share from working on the series?
CHAD: There is a really sweet scene between Owen [John Carroll Lynch] and Bryce. Bryce is sitting in Cynthia’s driveway just fuming that Cynthia won’t go with him to see U2. John’s character, Owen comes out to his car to give him some advice on how to cope with Cynthia. It’s as touching as it is uncomfortable.

What challenges did you face working on the series and how did you overcome them?
CHAD: There was a scene that was pretty well laid out, but Bryce’s dogs, Tulip and Molly had different ideas. In the scene, Bryce ambushes Cynthia at her office to give her a paddle that he had lasered Joshua Tree on (pushing about 100 on the romance scale). However, this scene also included Tulip and Molly, who were not in mood to cooperate. The goal in acting is to always just commit to wherever the moment takes you, but there was just no getting through this one. Sweet dogs, just not always the best behaved.

Then as an actor, what has been the one thing you have taken away from the experience of working on CRAWFORD?
CHAD: How important it is to have the confidence of the creative team and yourself. Mike Clattenburg and Mike O’Neill are such a dynamic pair and initially their CVs were a little intimidating. You don’t want to let esteemed professionals like them down. But they made sure each and every one of us was aware of our talent and that we were hired to bring these characters to life because they trusted us. Going forward, this is a lesson I would like to remember: that regardless of how collaborative the rest of the team is, it falls upon my shoulders to trust myself. I won’t always be so lucky to have guys like that in my corner.

You also worked on Season 2 of MARY KILLS PEOPLE as Bobby Dunn. What did you appreciate most about that experience?
CHAD: For anyone who hasn’t seen it, I won’t give any spoilers. The show takes on a really tough subject: should people give up control of their own lives and how they end? Though science and technology have created life support machines designed to keep someone breathing, sometimes the uncomfortable question remains: who are we doing this for, the one in the hospital bed or the ones who can’t let them go? There’s a lot of pain and suffering at the end of life and Mary [Caroline Dhavernas] has enough compassion to enter into that dark place that most of us wouldn’t. In season two, Dr. Dunn is the new head of the ER, which gives Mary something different to contend with. Dunn is an unknown variable and in this line of work that can be a scary thing. I think Dr. Dunn struggles with Mary because she challenges his authority and he’s the type of guy who prefers his authority to go unchallenged.

What has surprised you most about your career so far?
CHAD: I thought I would have done a lot more theatre by this point in my career. My training was in theatre and I do get up on stage once a year or so, but I would love the chance to tackle a really serious play and to be able to stick with a character for a long run. I’d like the chance to do the same scene over again and feel how it was different from the night before. That is certainly something I miss when doing just film and TV — once a scene is wrapped, it is gone for good.

Then what are the perks of where you are in your career right now?
CHAD: The breadth of parts. At this stage, I am so fortunate to have a wide range of characters under my belt. CRAWFORD has given me an amazing opportunity to play comedy, but I’ve had a lot of fun with some more dramatic parts. I’ve gotten to play the jack-ass a few times, which is maybe my favorite because you get to explore all the parts of yourself you try to keep leashed day-to-day

What has been your proudest achievement as a working actor at this point in your career?
CHAD: I’d have to say CRAWFORD is up there. I tend to play dramatic parts. It was my experience as a dramatic actor that made working on CRAWFORD so much fun because the characters all take themselves so seriously and aren’t ever playing for a joke. Our director, Mike (Clattenburg) gives the actors so much agency. We were given a lot of room to improvise and explore different ways a scene might go (although Tulip and Molly took it a little too far from time to time). Smoking a joint with Kim Cattrall’s character on “Sensitive Skin” is also in the running, no doubt.

Has there been any great advice you have gotten about working as an actor?
CHAD: In terms of acting advice, I think the best I’ve gotten is to focus on the other person. Your performance is always the best when you’re not self-conscious and you’re just letting things come naturally. This happens the most when you’re trying to provoke a reaction out of the other actor. Sometimes you realize that your best performance is when the camera is on your scene partner, because you’re trying to help them get the best performance they can get, so you’re totally focused on them and you’re not worried about ‘being in the moment’ at all. The dilemma is to try to get that performance when the coverage is on you!

What advice would you offer to other upcoming and aspiring actors?
CHAD: It is important to keep balanced. Acting can seem all-encompassing and it can be really easy to focus too hard on how (or whether) you are advancing in your career. Make sure that you keep cultivating other interests… like writing, sports, or travel… anything really. Having something in your life that you enjoy and that has absolutely nothing to do with acting can help give you a mini vacation from the ups and downs and can therefore help you stay grounded. Also, when you’re interested in something you become interesting to other people and that is the most compelling thing — whether on screen or in a casting room… It’s probably good dating advice too!

Do you have any other upcoming projects that you can share that fans should keep an eye out for?
CHAD: I shot a Christmas movie recently and (predictably) it will be out in December. I’m a big fan of Christmas and my family still sticks to all the traditions each year. One tradition we have always followed was making sure we see all the same movies we’ve been watching since we were kids. So getting to act in one myself was awesome. Maybe we will incorporate this new one into our yearly Christmas watchlist! In terms of the acting experience, other than wearing parkas and pretending to be cold while in subtropical weather, it was a great time.

To fully appreciate the CRAWFORD world and the joy Chad’s performance brings in the midst of it, all episodes of its first season are currently available for viewing on the CBC website: http://www.cbc.ca/comedy/shows (although currently limited to Canadian viewers) and CRAWFORD Season 1 is also currently airing on Thursday nights on CBC in Canada. More information can also be found at: http://www.cbc.ca/crawford/episodes/season-1

CRAWFORD “What To Do When He Likes U2 Too Much”: