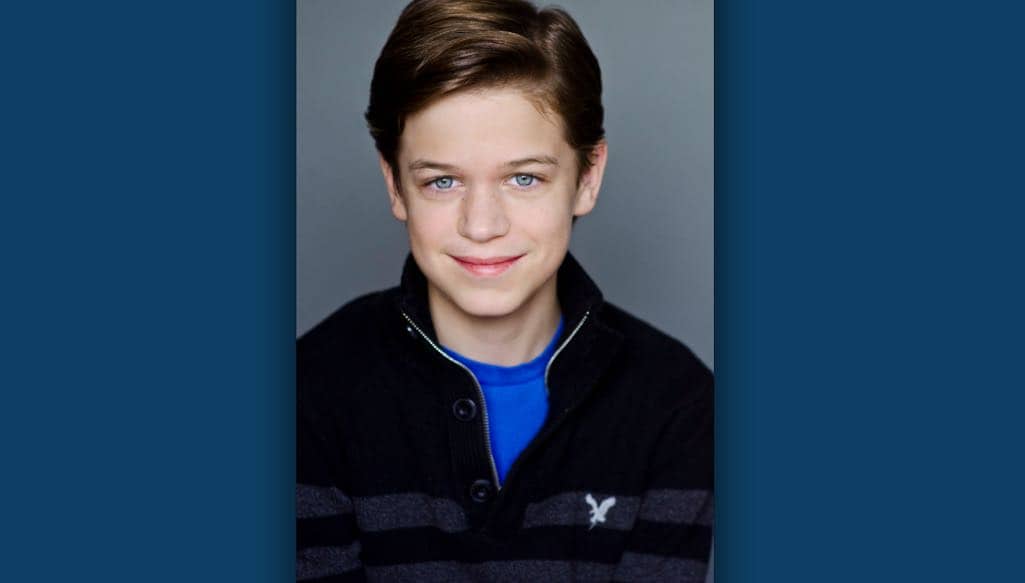 It’s every parent’s worst nightmare: a missing child.  In the sci-fi drama series COLONY, that living nightmare is heightened by the presence of the new occupiers — aliens who have conquered the entire planet.  The search for Charlie has driven both his parents to align themselves with dangerous factions — his dad was recruited into the Colonial Transitional Authority and his mom enlisted with the resistance.  Neither fared well and Season 1 was about surviving long enough to find a way over, under or through the wall separating them from their lost son.  In an exclusive interview, upcoming young actor Jacob Buster talks about the quandary Charlie finds himself in just to survive and what is next for him in his budding career.

What initially drew you to the role of Charlie Sullivan in USA Network’s series COLONY?
JACOB: Charlie comes from a loving family that is going through an extremely difficult time. Charlie has been through a lot trying to survive on the other side of the wall. I think all of us go through difficult times in our lives and love is one of the greatest forces we have to help us through them. That’s what drew me to Charlie.

How would you describe who Charlie is?  What do you most admire and/or like about him?
JACOB: Charlie was a happy kid who loved playing baseball with his dad until his whole life was turned upside down. I admire how resilient and brave he is. Trust me, the Santa Monica bloc is not like the Los Angeles bloc… at all.

Generally, what kind of journey does Charlie undertake in Season 2 of COLONY?
JACOB: It’s a universal journey we all face. How do we return to normal after we’ve gone through something tragic, something that pushes us beyond what we thought our limits were? And what if there really is no going back? Only going forward. Not only is the nation divided, so is his family. This is a big portion of Charlie’s journey in Season 2.

Does Charlie want to be reunited with his family or is he happy being on his own?
JACOB: You would think this would be an easy answer but it’s actually much more complicated than whether or not Charlie wants to be reunited. I can’t really give away more than that.

Do you think Charlie as more of a hero, savior, betrayer, or traitor this season?
JACOB: He has his heroic moments but he is so broken this season that mostly he is in survival mode. It’s tough for him to get out of a fight or flight mindset.

What are the odds of Charlie making it alive through the entire season?
JACOB: You’ll just have to watch the season and see. The creative team on this show from executive producers Carlton Cuse (LOST) and Ryan Condal (HERCULES), and the writers are so brilliant that I think you will enjoy the journey.

What has it been like working more with Josh Holloway and Sarah Wayne Callies? Any favorite scenes or moments you can share?
JACOB: Josh and Sarah have not only taught me so much about acting by just watching their process, but they are so kind and humble.  They are the kind of people I would like to be, as actors and as human beings. I know a lot of people in film say things like this but in this case, it’s actually true. I will say this, my nickname on set is “Fleek Skeiber.” Josh gave it to me just like his character from LOST had a nickname for everyone. How I got the name is a story for another day.

What is your favorite part about working on COLONY?
JACOB: My favorite part of filming COLONY is that these people are my friends.  I also love the fun and creative energy on set. I’ve learned so much from this group of professionals. My other favorite thing is that we shoot on the Universal Studios Lot. I will not confirm or deny whether I have gone on the rides at Universal Studios without having to wait in line.

What is the one thing you have taken away as an actor from working on COLONY?
JACOB: Before this, I mostly did films. The thing I have really loved about a series is being able to slowly let a character develop over a longer period of time. It’s fun to let the insights and discoveries the character makes, slowly reveal themselves to me. Plus, you become such a family on set.

What do you hope viewers take away from watching COLONY in Season 2?
JACOB: Anyone who watched Season 1 knows the show is about a nation divided and how the love of a family endures the battle of good vs. evil. In Season 1, we only see how the city of Los Angeles has been taken over and cut off from the rest of the world in an alien invasion. In Season 2, Will (Josh Holloway) goes beyond the wall to save my character, Charlie. We also  discover that Los Angeles isn’t the only COLONY. There are others. One of the fun things is episode 1 goes back to The Day of the Arrival so viewers learn more about what happened that day. It’s quite the ride.

Who do you wish you could work more with on COLONY and why?
JACOB: I’ve already talked about Josh and Sarah so I have to mention how brilliant Peter Jacobsen is. I love watching the choices he makes. He’s so smart and effortless. I think any young actor should take notes and learn from someone like that. Plus, he’s just an awesome and funny guy.

At this stage of your career, what do you think you have learned from the amazing variety of roles and projects you have worked on?
JACOB: I think I’ve learned just how big and diverse our world is. There are so many kinds of people with unique view points and backgrounds. At the same time we all have the same needs. It’s taught me just how important love and kindness is. I want to always try my best to give that to everyone I meet.

If there were one role you would like to revisit from your career, which would it be and why?
JACOB: Charlie for sure.  I’m crossing my fingers for a Season 3. I’d also love to go back to the role of Matthew Buckley in the “Christmas Project,” a film that came out this last holiday season on Netflix. First of all, it was a comedy which I don’t often do. Also, the cast was mostly kids my age and it felt like I got to just have fun with my friends the entire time.

Has there been any great advice you have gotten?  What advice would you offer to other upcoming and aspiring actors?
JACOB: Probably the best advice I’ve been given is to enjoy the moment. This is true as an actor and in life. Really, the present moment is all we have and I’m grateful for it. The advice I would give to any aspiring actors is to do great work wherever you are.  It doesn’t matter if you’re in a school play, a student film, or on YouTube. Great work gets noticed. The more you practice your talent and work hard, the better and more opportunities will come your way.

Are there other upcoming projects that you can share that fans should keep an eye out for?
JACOB: Yes, there’s a film in development that I’m attached to but I can’t say too much. Keep an eye out for it!

What do you aspire to do next?
JACOB: How about the next season of STRANGER THINGS! I would love to meet and work with the cast and the creative team on that.

To see how Charlie’s tormented journey unfolds this season on COLONY, be sure to tune for all new episodes on Thursday nights on USA Network. Then to see what Jacob his up to next, you can follow him on Twitter: @JacobBuster1 (Fingers crossed that the STRANGER THINGS folks give him a call!)