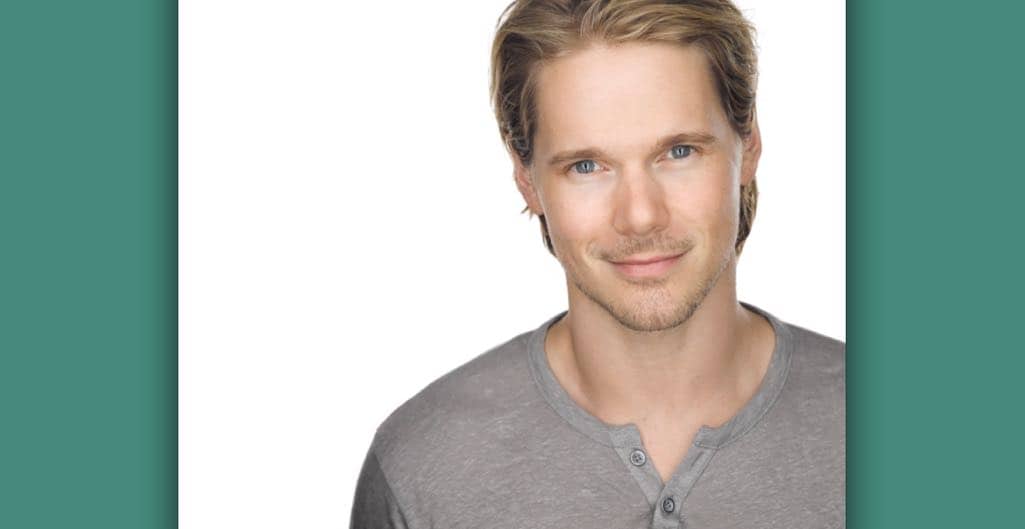 Getting the chance to shine in the plum Thanksgiving night timeslot, Michael Nardelli co-stars in the Hallmark movie CHRISTMAS IN HOMESTEAD. Stretching his creative wings, Michael has spent 2016 busily bouncing between film and television with appearances the films “We’ll Get It,” “The Tribe,” “Cassidy Way,” as well as the television series “The People v. O.J. Simpson: American Crime Story.” Then not slowing the pace down for one second, Michael not only carved out time to appear in this week’s Hallmark holiday movie, he is also hard at work on his own new series “Dark/Web.” In an exclusive interview, Michael talks about the special appeal of CHRISTMAS IN HOMESTEAD and previews what “Dark/Web” is all about.

What drew you to CHRISTMAS IN HOMESTEAD and the role of Ian Cooper?
MICHAEL: First, I got sent the appointment to audition for it, so that’s what drew me initially. From there, I really got into the idea of doing a romantic comedy – especially one about Christmas. It’s such a great time of year and draws up so many fun memories from my childhood. I’ve done a lot of darker film and TV work in the last few years, so I was excited to do CHRISTMAS IN HOMESTEAD and be surrounded by Christmas trees, snowmen and hot cocoa. It was a nice break.

How would you describe your character Ian? What do you most admire about him?
MICHAEL: Ian’s your typical Hollywood paparazzo. He’s lost his way a bit, living in L.A. and hunting down the exclusives. You could say he’s sort of fallen into the “wrong crowd” and, when we meet him, is all about making money and getting the big “photo” even if it means invading the privacy of the celebrities he’s following. That said, I do admire his heart and his ability to change. He meets someone special in the movie who has a strong “moral compass,” and Ian’s smart enough to know he’ll have to change to win her good graces.

What journey does Ian undertake in this film?
MICHAEL: Ian goes from a very affected, L.A. “lifestyle” kinda guy to someone who’s much more sympathetic. When we first meet him, Ian’s really only concerned with himself and his own financial gain. Different circumstances in the story force him to see outside himself though, to see the damage his quest for money and chasing the big “exclusive” can cause. He learns there’s ways he can his talents for something more gratifying.

What was your favorite part about working on the project?
MICHAEL: Getting to film in Georgia, where my family lives, was a real treat. I got to work and spend time with the folks, my nieces and nephew. That was a real gift. And I loved being around all the Christmas decorations. No one does Christmas like Hallmark, so it was great walking around the little town in Dahlonega, where we filmed, and feeling like I was in a postcard.

What was it like working with Taylor Cole and Michael Rady in this film?
MICHAEL: I loved working with Taylor and Michael. Most of my scenes are with Katrina Norman – who’s also a really cool gal, but I loved hanging with her, Taylor and Michael during our lunch breaks and catching up, talking about acting and life and everything else. As the resident “paparazzo” in the film chasing the resident “superstar” (Jessica, Taylor’s character) I have to say, I felt a bit bad whenever we had a scene together – it was usually me chasing her away into her car since my character Ian is determined to get the big money-making shot from her.

For you, what is the appeal of working on Hallmark films?
MICHAEL: I’m excited to be in something that my entire family can watch. It’s hard to do that nowadays because there’s so many different age brackets in my family now. You don’t want something too mature for the young ones; you don’t want something too controversial for the parents. Like I said, a lot of the stuff I’ve been in the last few years deals with darker themes. I’m excited to gather everyone up to watch CHRISTMAS IN HOMESTEAD and know that they’ll all find something, or someone, in it they relate to. Hopefully, it makes them smile by the end of it – that’s the joy of these Christmas movies that Hallmark does so well.

What was the one thing you learned or took away from working on CHRISTMAS IN HOMESTEAD?
MICHAEL: I actually learned that I really enjoy working on romantic comedies! CHRISTMAS IN HOMESTEAD is the first one I’ve done and I totally loved falling into something that was light and hopeful. It has moments that are silly and some that are really sweet. I confess that I’m usually drawn to watching and acting in darker, very serious projects – but this was a nice antidote to that. I hope I get to do it more often!

At this stage of your career, what do you think you have learned from the amazing variety of roles and projects you have worked on?
MICHAEL: That each one is different and requires different types of preparation, and that that’s okay. I always think I want to find that secret formula that makes every single audition work, or make every job I do amazing. But that’s not the case. You take little bits of knowledge from one gig, and you apply it to the next, but then you need to learn new tricks to add to the “tool belt” each time. There’s days where you’re uncertain or insecure – I’m learning to tell myself that that’s okay too. It’s all growth and learning and it doesn’t ever stop. I hope I’m 90 someday, on set, learning something new about myself and about the work I’m doing.

What are the perks of where you are in your career right now?
MICHAEL: I still feel like I’m just getting started in a lot of ways, so in that sense it’s fun to be open to all kinds of new material. I don’t have any stipulations yet that the big superstars have: “I can’t play that again, I’ve done that” or “No, that’s boring, isn’t there anything new out there?” I feel really excited by each new role I take on. And even though I still feel I have miles to go to really feel “accomplished,” I do now feel like after ten years of being in the business I can approach things with a bit more confidence in my abilities and not be so nervous all the time.

Has there been any great advice you have gotten? What advice would you offer to other upcoming and aspiring actors?
MICHAEL: I certainly don’t know everything about it, but when people ask for advice on how to start acting or creating I just say “do it.” Get your friends together and put on a play, or write a play! Make a short film – a film last year called “Tangerine” was shot all on an iPhone… and it came out in theaters! There’s really no stopping you these days from creating something if you pool your resources and get to it. The thing is to just do it, however you can, with whatever means you currently have. Make something horrible, cringe at it and learn from that and apply it to the next thing. You’ll always want bigger or better, but that’s beside the point. The point is to do, learn and enjoy, then do again.

How did you come up with the idea for “Dark/Web”? What was your inspiration? What is the series about?
MICHAEL: I made a movie called “Circle” last year that I was also in. For “Dark/Web,” I teamed up with my brother, Tim Nardelli, and Mario Miscione who were also involved in “Circle.” This time, we wanted to craft a story that was a bit of a hybrid in terms of its format. We love anthology shows like THE TWILIGHT ZONE and BLACK MIRROR, so we definitely wanted to have that kind of freedom in the show to tell self-contained stories with different filmmakers and casts. But we also love serialized stories like MR. ROBOT or even GAME OF THRONES. Shows where you watch them and you feel like you’re delving into a really good book and are dying to know what happens next. So “Dark/Web” has both of those elements. It deals with this modern world we’re living in where technology has run amuck and we’re always connected — mostly to our devices and not as often to each other, or ourselves, sadly. We’ve tried to make it very topical and very scary. Hopefully, it achieves those goals!

What do you hope viewers take away from watching “Dark/Web”?
MICHAEL: First, I just hope they’re entertained. But on a deeper level, I hope it opens up discussion about the role technology plays in their lives. We suddenly have these devices in our hands that make a lot of things in life efficient, but do they really? What’s the downside? We suddenly have all of these networks keeping us connected to other humans, but are we? And even if we are, what are the dangers that can arise from always “being connected” and having so much information about ourselves out there? Hopefully, the show inspires people to think about these things. We’ve all taken huge strides into this tech world without pausing to ask what it all could mean. There’s definitely an element to “Dark/Web” that is a cautionary tale.

What do you aspire to do next?
MICHAEL: Just keep working and learning. We’re filming “Dark/Web” episodes through January, then have to put all those pieces together. I wrote a feature film I’d love to direct next year. I love when surprises like CHRISTMAS IN HOMESTEAD come up; I audition and a week later I’m in some town somewhere with new friends making a movie! I definitely have plans and like to plan, but also know the life of an actor can be fairly unpredictable in the best and worst ways.

Do you have any current or upcoming projects that you can share that fans should keep an eye out for?
MICHAEL: CHRISTMAS IN HOMESTEAD is on this Thanksgiving at 8PM on the Hallmark Channel. I’m in a film called “The Tribe” coming out next spring that I’m really proud of; it’s a post-apocalyptic drama in the vein of a movie like “The Road” or “Z For Zachariah”. And then we’ll be releasing “Dark/Web” into the world sometime early next year. Other than that, you can find me on all the usual social media stops like Twitter, Instagram and Facebook at @thenardelli. Thanks everyone!

To see more of Michael’s wonderful performances, be sure to tune in for the premiere of CHRISTMAS IN HOMESTEAD on Thursday, November 24th at 8:00 p.m. on Hallmark Channel. Then keep an eye out for “The Tribe” and his new thought-provoking series “Dark/Web” both coming in 2017.