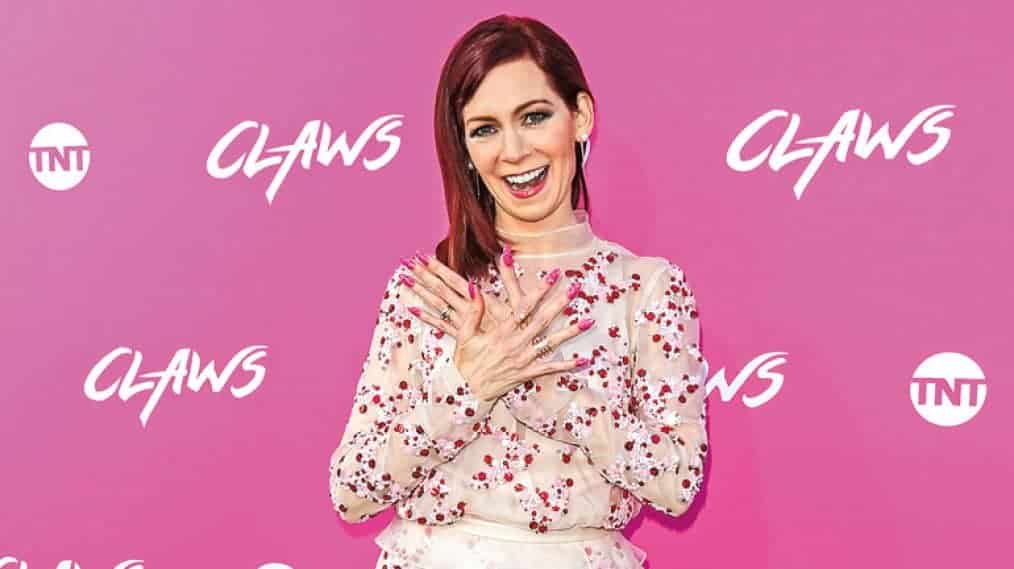 Carrie has made a name for herself by playing pivotal roles in some of television and film’s most memorable projects. Carrie won an Emmy in 2014 for Outstanding Guest Actress In A Drama Series for her role in “The Good Wife” and was nominated in 2016 for the same category. She beat out fellow nominees Linda Cardellini for “Mad Men,” Jane Fonda for HBO’s “The Newsroom,” Margo Martindale for “The Americans,” Joan Cusack for “Shameless” and Diana Rigg in “Game of Thrones.”

Most recently, Carrie starred as a lead alongside Patrick Warburton in the NBC comedy, “Crowded,” and will be playing Elle in IFC’s critically-acclaimed comedy “Brockmire,” which follows Jim Brockmire (Hank Azaria), a famed major league baseball announcer who suffered a notorious public breakdown after stumbling upon his wife’s infidelity. Carrie’s character is a nihilistic female version of Brockmire whose fearless partying and self-destructive attitude fuels Brockmire’s descent into the dark abyss that is partying in New Orleans.

Last year, Carrie was seen working on the ABC mini-series “When We Rise” created by Dustin Lance Black and the new CBS drama, “The Good Fight,” where she recently reprised her guest role as Elsbeth.

Modesty aside, how would you describe yourself?

My friends call me “Tenacious P”, if that’s any indication.  I’m a self-starter, and, for better or worse, an over achiever. Another way to put it: I’m a seeker. I’m loving, loyal, energetic, positive and meditative. And I am also a total clown, in the best sense of that word.

You have an incredible body of work as an actress, in addition to dozens of films, roles on some of the most celebrated TV shows of the last fifteen years-“Law & Order”, “True Blood”, “The Good Wife”, “Person of Interest” and now, “Claws.” To what do you attribute your success?

I think success comes from hard work, constant training, perseverance, humility, collaboration, faith, inspiration, and an unabashed and sometimes irrational lack of regard for the word “no”.

Juilliard is one of the premiere performing arts schools in the country. Tell me about your experience there and how it has shaped your career.

Before I got into Juilliard, I had already had a wonderful undergrad experience at the University of Evansville in Indiana. At Evansville, we were taught all aspects of creating theater: acting, sets, costumes, administration, directing, playwrighting, auditioning. Juilliard continued to refine my training and build up my toolbox. It prepared me for pretty much any acting challenge that might come my way. And equally as important, it put me in direct contact with the industry and agents. This would have taken me considerably longer if I had just moved to New York City on my own. At Juilliard, I also met my long time producing partner James Vasquez, and we created our production company Daisy 3 Pictures together after we got out of school.

How did it feel to win a Primetime Emmy Award for your role in CBS’s “The Good Wife”?

I still can’t really believe it happened. I love being creative, and I am grateful when I have the opportunity to be a part of a project that I believe in, so when my peers took notice and acknowledged my work on a role that I treasure, it was truly exciting and humbling. I don’t know who got up there and gave that acceptance speech, but I was very grateful that she took over my body!

How was the experience of being a judge on RuPaul’s Drag Race?

This was maybe one of the best days of my whole whole life! I’m a huge fan of the show and of Ru Paul and Michelle Visage. Everyone there was so welcoming. The producers knew I was a fan, so they showed me around and let me watch the two-way mirror where the ladies get ready which was so cool. I took my job as a judge very, very seriously because those girls work so hard, and I wanted to make sure I honored them. To watch up-close how the show gets made was fascinating. And during the lunch break, I even got to do Ru and Michelle’s podcast.

I do the morning walk for our dog Chumley, so I get up and out pretty quickly with him; then it’s my morning smoothie and some kind of exercise every other day. I love Pilates or a hike or light cardio and weights at the gym. Then I go to work, either on set or from home. Chums gets four walks a day. If Michael and I are together, we split those walks, or if we are working, the dog walker comes. I’m someone who loves to be busy, so there’s rarely a moment in the day when I’m not doing doing doing.

You have been married to your husband, actor Michael Emerson, for twenty years. How do the two of you decompress with such busy schedules?

We love our dog Chumley. He really anchors our days, and we enjoy sharing the duties of taking care of him. It adds a level of calm to the craziness. When we are home in NYC, we try to have family dinner every week with my brother, my sister, brother-in-law and two nephews. My mom spends a lot of time in NYC, too, so she joins as well. We also travel to Kansas City when we can to spend time with Michael’s brother and his family. Being with family gives us such joy and perspective on what’s most important.

Who are a few directors and/or actors you would like to work with that you haven’t done so yet?

I’d love to work with as many female directors as I can, like Patty Jenkins, Ava DuVernay, Lynn Shelton, Sarah Polley (who I worked with as an actor 20 years ago!) I’m really excited that women are getting more work than in previous years, but we still have a long way to go. And I still have so much to learn from them, both as an actor and as a director (I’m a director, myself…)

Do you have any advice for young actors starting their career in Hollywood?

I’m a big advocate for training. I think taking classes or going to acting school just gives you a great foundation upon which to build a career, and it will help you sustain that career for a lifetime. In addition to training and pursuing acting gigs in the traditional sense, I also encourage you to create your own work. Don’t give your power away by waiting for other people to tell you what you can do with your life.

Tell me about your fans.

I play a little game in my head when someone comes up to me and says “I love the show”. I try to figure out if it’s “The Good Fight” or “Claws”. I’m not always right, but it’s fun to do a quick guess. I love how the fans are from all walks of life, though, and I’m always touched when they appreciate the work.

What’s your favorite cause or charity?

I’m a big supporter of The New Harmony Project ( www.newharmonyproject.org ) It supports writers whose work offers hope and celebrates the dignity of the human spirit. I believe powerful story-telling can change the world, and I think it’s so important to support writers who have that mission, especially in these challenging times. I’m also a big supporter of LGBTQ organizations that fight for equality and justice such as Human Rights Campaign and Equality Federation.  And I’m a huge supporter of Times Up!

Which living person do you most admire?

I admire Shonda Rhimes. I think it’s inspirational how she took charge of herself as an artist and a show-runner and created her own empire within the predominately male dominated world of Hollywood. She’s also someone who fights for gender parity and safety for women in the workplace.

What project(s) do you have coming up?

“Claws” season 2 premiered on June 10th! As a director and producer, I’m developing a half hour comedy with writer Lynn Rosen that will star my husband, if we can get a network to sign on!

Tell me a secret-a good one!

Sometimes I will eat a bag of cheddar Goldfish and call it dinner.