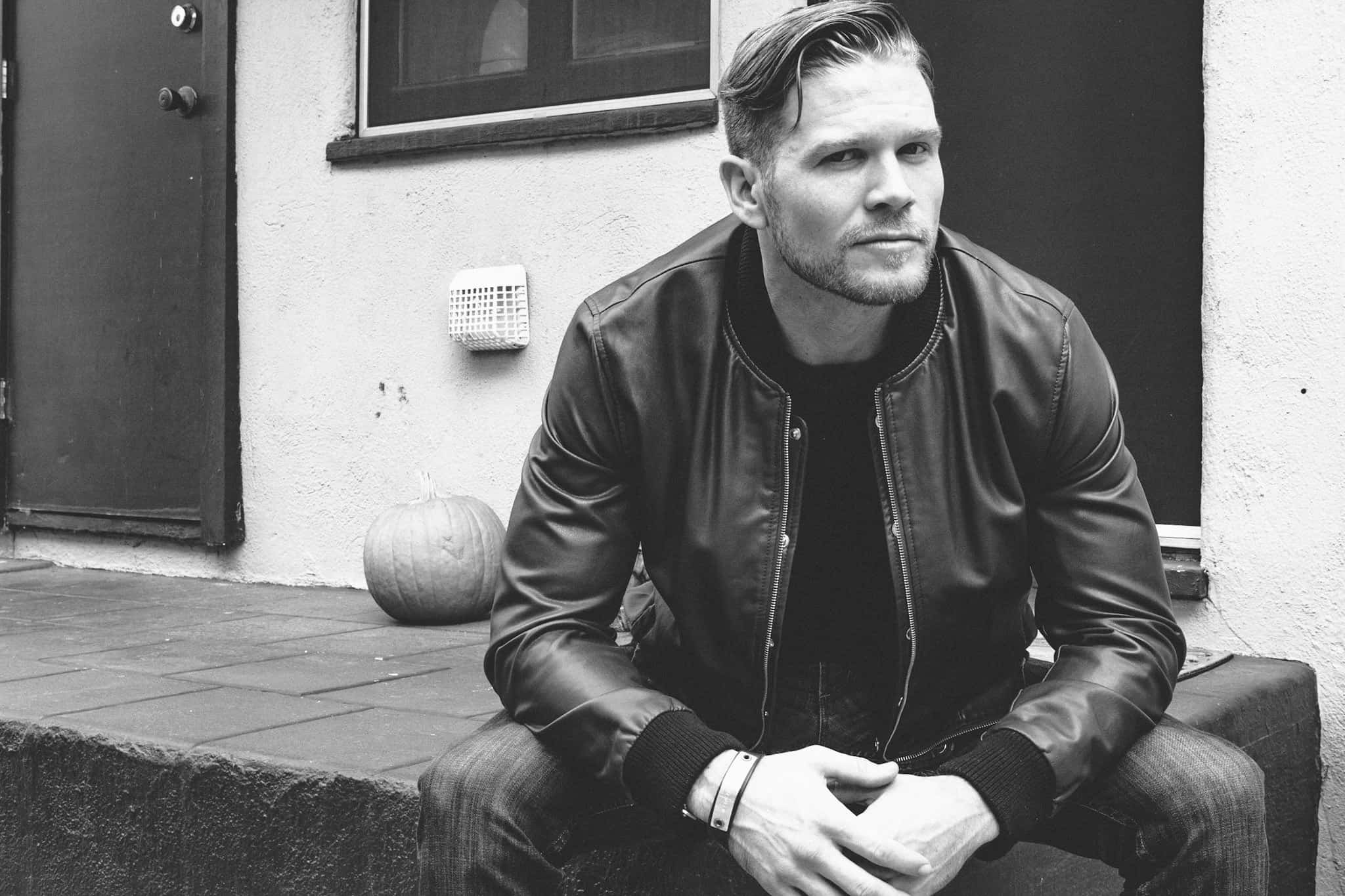 Behind all the amazing onscreen visuals contained in the popular video game series Call of Duty, there is a talented ensemble of voice actors who bring the characters to life. Coming from a strong background of experience, including appearances in Hulu’s drama series CHANCE, NCIS: NEW ORLEANS, HOW TO GET AWAY WITH MURDER and the film “Million Dollar Arm,” Brett Zimmerman knows how to embody a character through vocal projection and intonation in such a way that a player or audience member feels each word he conveys. In an exclusive interview, Brett shared what continues to appeal to him in tackling voice roles and the lure of working on Call of Duty: WWII, and he also reflected on the strong perseverance required to pursue a full time career as a working actor these days.

What initially appealed to you about becoming a voice actor for Call of Duty: WWII?
BRETT: COD speaks for itself in regards to being one of the biggest game franchises in the world of gaming and the truth is, I didn’t know what involvement I would have in the game until I received my official offer for the role of PFC Ronald ‘Red’ Daniels. What really appealed to me was the pressure I received that came with that offer. At the table read, it was expressed to me by the creative team that this story was so much more than just a game. CODWWII was written with a respect to history and a war that was an inflection point of our history. As Daniels, there was an importance as the primary playable character to open up a window into this story. We want the players to have a sense of connection when playing CODWWII, and not just through my voice. In this game there is a realism to the places, people and perseverance endured through the men and women of that great conflict.

How would you describe what it is like to be a voice actor?
BRETT: I absolutely love doing voices. There is so much room to play. To me, voices create characters, or at least a big part of them. We all have characteristics that define us, down to our very breaths, and the more we alter that, the more we find change. This in turn allows me as an actor to mold myself and open my mind up to the idea of being something else. While studying at AMAW under Anthony Meindl, he had me do a scene from “Mud,” a play written by Maria Irene Fornes. I was playing Lloyd, who is simple, dirty, animalistic, and somewhat violent. To open me up, Tony had me stick a thick wad of paper towels in the gums of my mouth. Immediately, it altered the way I spoke. As I transformed, I became more and more gross to watch. In our talk-back, Anthony said he felt like I was a gross gargoyle on stage. To me, this was so satisfying because I knew I had allowed myself to free up and change through my voice, which ultimately altered me physically as well. It’s truly so freeing!

How do you choose your projects?
BRETT: In an industry where it is so competitive to find work, you can’t just say “yes” to work. Each project is different and I have to be selective. Relevance is always changing, and I try to keep an open mind, but it certainly helps when finding a character you can relate to or a story of purpose and influence. With Daniels in COD, there was a sense of perseverance in his life, which I connected within my own. Hardships are something that we will without a doubt face, some worse than others. What’s important is the journey, and how you deal with those hardships. So many stories today are written from some degree of truth, news, or history. While it can be hard to share many of these stories, there is an importance to do so. My hope is that I align myself with projects that look to do this in a positive way towards all those involved and the lives it has or will touch.

What would you say is the trick to successfully landing a voice actor role?
BRETT: Ha! Unfortunately, there are no tricks, and if there are I’m not sharing ; ) No, but seriously…just always commit to your work. Your voice is like any other muscle. You can train it, shape it, and strengthen it towards certain roles if you just put in first the imagination, then the work.

Any favorite projects that you have gotten to work on?
BRETT: In my resume of work, I have to say portraying my character PFC Ronald Daniels has been the most fulfilling. He’s someone I can truly be proud of in a story of brotherhood and heroes. CODWWII was created with ingredients of love, honor, attention and detail, and topped with a fine layer of respect…that leaves a good taste in your mouth. Grateful to have been a part of it! Going back to my earlier work, I once worked with Mr. Marvel himself, comic book legend, Stan Lee. When The Avengers released in 2011, Dr. Pepper ran a spot titled, “One of a Kind Avengers” in which I portrayed Captain America. Stan Lee has created so many heroic icons. Shaking his hand was a privilege, but to portray one of his characters was an honor.

What has been one thing you haven taken away from each of your current projects?
BRETT: With both Flesh and Bone, which was shot for VR, and Call of Duty, which was all motion capture and VO, there was one common similarity. As an actor, you are completely immersed by the world around you. The camera is everywhere, and once action is called, you’re expected to live through the entire scene. This was a new process for me, a new style of filming. There are no cuts in between takes, which calls for you to be committed to not just your character and dialogue, but the level or location in which you’re filming. Spacing becomes so specific, and the more you can stay in it, the more organic each scene flows.

What has been the biggest challenge working as a voice actor?
BRETT: In CODWWII, we had countless sessions covering five hundred plus pages of story. Being somewhat new to voice acting, I go back to where I mentioned treating your voice as any other muscle. Resting it when you can. Relaxing it with remedies. When you’re in a four hour sessions hitting two hundred plus lines of battle chatter, commands, objectives, or even different levels of breathing and pain, you have to learn how to endure that as efficiently as possible to deliver a consistent voice.

What have you learned from all your years as an actor?
BRETT: Hah, that’s easy. When people say, “you have to be hungry for it”, I say, “They’re wrong. You have to be starving for it.” Passion comes with conviction. I didn’t get into acting because it’s easy, but I did learn early on it’s a marathon, not a sprint. While it is so much harder than I could have ever imagined, I will keep my own pace and always strive forward.

At this stage of your career, what do you think you have learned from the amazing variety of projects you have worked on? Then what has surprised you most about your career so far?
BRETT: Acting offers so much towards one’s self-discovery. I didn’t realize this early on, but I’m so thankful for it. Through connecting to others in the characters we play, or the choices we make, we challenge ourselves to open up. Life is not always beautiful. It can be messy, and unclear at times. We have to learn to live not just in the light, but also in the mess of it all. Living through each surprise teaches us to stay on our toes. While I try to be as calculated as possible, often times there is no rhyme or reason as to why things happen the way they do. The more we trust the process, the more progression pivots us forward.

Do any of your characters and the situations they find themselves in ever leave a lasting impression on you?
BRETT: Absolutely. I feel I always try to give a part of myself to whoever my character might be. Sometimes that’s someone we’re incredibly proud of, and others it’s a character we can’t wait to wash our hands of. We all make choices in our lives that we wish we wouldn’t have made, and carry regrets. It’s important to challenge yourself in facing those regrets and bettering yourself in the future. If I dig deep towards the darker places of my past and my core, then it gives me a place to grow from.

Has there been any great advice you have gotten? What advice would you offer to other upcoming and aspiring voice actors?
BRETT: Winston Churchill said, “Success is not final, failure is not fatal: it is the courage to continue that counts.” I think this is so powerful. As I mentioned earlier, I’ve learned that a career in acting is a marathon. You have to be ready to find both wins and failures. Celebrate success when you have it, and learn from failure when you are faced with it. No matter what though, persevere. I have seen too many talented actors give up well before their time. Have the courage to continue and make every moment count.

Do you have any other upcoming projects that you can share that fans should keep an eye out for?
BRETT: Well I’m excited for both Call of Duty: World War II and Flesh and Bone, and I hope the fans will be as well. I’ve just wrapped both. COD releases November 3rd, and “Flesh and Bone,” we’re looking at the back end of November. My schedule is now opening up for new opportunities, and while I don’t know what that holds, I’m trusting the process and enjoying the ride!

To hear Brett’s cool vocal performance, be sure to check out Call of Duty: World War II, which is available now on Playstation, Xbox, and Windows video play platforms. To find out more about Call of Duty, be sure to follow @CallOfDuty on Twitter or visit: https://www.callofduty.com/wwii Then to follow Brett as his career and life adventures continue, you can follow him on Instagram: https://www.instagram.com/brettzimmerman/