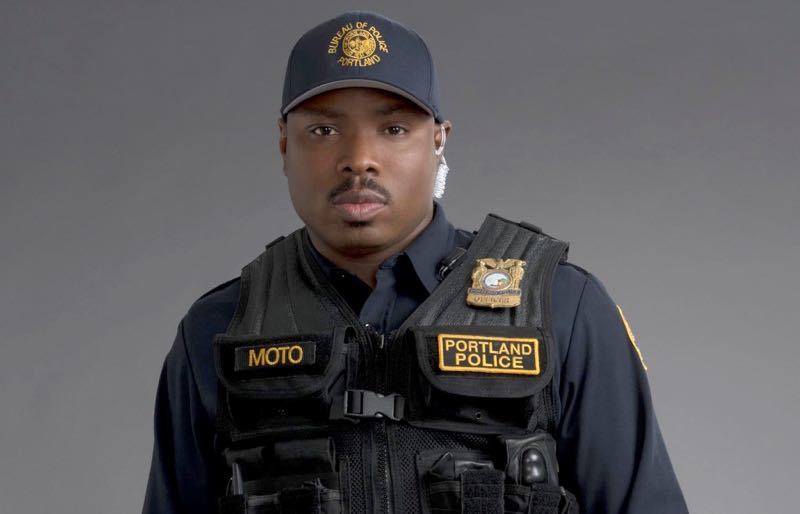 As the new Fox drama BACKSTROM picks up momentum, viewers are getting to know and see the different sides of the increasingly complex characters that populate the BACKSTROM world.  One of the stand out characters is Officer Frank Moto (Page Kennedy), a fellow member of the Special Crimes Unit and a former MMA fighter.  The duality of his physical prowess combined with a keen intellect makes him a formidable member of the unit.  It also makes him essential to assisting in each investigation as most criminals will think twice before making a move if Moto is there.

In an exclusive interview, star Page Kennedy talked about the intriguing relationships between all the characters and how his character Moto fits in amongst them, as well as all the fun he has working with such a funny and talented array of actors.

Tonight’s episode of BACKSTROM is a big episode for your character Frank Moto. It’s the Civilian Oversight hearing and Moto is like the central character in that everything seems to weigh on him. What can you share about it?

PAGE:  (Laughs)  Tonight is a really good episode.  I’m featured in it a lot, so I’m excited.

How would you describe Rainn Wilson and working with him?

PAGE:  I would describe Rainn as a delicious cup of coffee. I have so much fun with him, just as a person and as a talent.  Our relationship is unique and I think we get each other’s humor and we respect each other’s talent.  For me, I’m someone who can learn from him and that’s really awesome.  To have someone who is trained and who is funny.  I learn from him every day.  I love working with Rainn.

What is Moto and Backstrom’s (Rainn Wilson) relationship on the show? It’s hard to get a sense of that given what we have seen so far.

PAGE:  That’s something they could have explored more of.  I think Backstrom needs Moto because he knows Moto offers something that he does not want to do — and that is that physical  presence — that protector thing.  Backstrom doesn’t want to shoot anybody.  He doesn’t want to fight.  And Moto is kind of his own personal bodyguard.  Moto is also Backstrom’s driver and anytime he need to go anywhere, Moto takes him.  There is an upcoming episode where that becomes a problem because Backstrom likes to ride in the backseat and Moto stands up for himself and lets Backstrom know that he does not appreciate that.  But I think Backstrom just likes the convenience of Moto.  And Moto, for him, all he cares about is becoming detective.  Whatever it takes, whatever he needs to do, he’s going to do that to move up in the world to whatever he is aspiring to do.

Moto is a pretty good cop.  Why does he want to be a detective?

PAGE:  Probably because (1) detectives get paid more and (2) because he is in this unit with all detectives and he is the only one that isn’t a plain clothes cop.  He is an ex-martial arts fighter and I think he did well at that and he moved on up in that.  So I think he is somebody who has ambition, and he has a kid.  He has a son and the son doesn’t live with him, but Moto wants to show his son that you can be and do what you want through hard work and he wants to represent that.  So I think it has a lot to do with that, as well.

Moto makes interesting choices.  He is very pragmatic.  He understands and just does what needs to be done, regardless of what other people may think about it — which is interesting for someone who is a cop.

PAGE:  Moto is just used to making things happen.  I think he had that with him prior to becoming a police officer and he held onto that same trait after.

Do you think this might be his chance to get that detective badge and he may sell out Backstrom in tonight’s episode?

PAGE:  I don’t know.  I think it is an interesting decision that he encounters.  But, at the end of the day, he makes the right decision for him — for Moto.  He chose the decision that he felt was best suited for himself.

What is the quality that stands out the most in Moto?  Who is he at his core?

So he is not someone you would ever doubt.  You just know he is going to have your back then.

For the Civilian Oversight Committee, Amy (Sarah Chalke) is on that.  What does Moto think of Amy as Backstrom’s ex?

PAGE:  First of all, Sarah Chalke is just phenomenal.  She brings charm.  She brings charisma.  She brings humor.  She brings sexy.  She is just the “full package” and her character Amy complements the Backstrom “full package.”  It’s great.  I think having her there shows another side of Backstrom that we do not get to see any other place because that is someone he really loved and still does to a certain degree.  It is good to show that because Backstrom always sees the bad in everyone.

Who else is Moto closest to on the team?  Who else does he like to work with?

PAGE: He’s with Backstrom often, but then Moto has a lot of his “moments” — I call them “moment” scenes because sometimes Moto is just kind of there as part of the team and as a fixture in this ensemble — but a lot of times when he is with Detective Almond (Dennis Haysbert), he has his “moments.”  So they put us together for scenes that really matter.  Then I think Moto has the most fun — and I, as an actor, have the most fun — with Kris Polaha’s character Niedermayer.  I think Moto admires Niedermeyer.  He admires the way he goes about things and how smart he is and how he explains things.  So I think he likes that the most.  And I, as an actor, enjoy that and I have the most fun with Kris.

Moto is kind of like the strong-silent type, until he says something, and it surprises quite a bit.  How do you as an actor do that?  How do you know that is the right moment?

PAGE: The writers take care of that for me.  The writers give me the opportunity to come out with these one-liners that mean a lot.  So I have to attribute that to the writers. They set that up for me and then I just knock it home when I can.  Like Moto asks these questions that are like comic-relief questions.

Moto is pretty insightful.  Because you forget sometimes that is his job too.  He doesn’t just stand there.  He is investigating these crimes.

PAGE:  Exactly.  Like I said, when he has those “moments” — those pan out — and tonight is one of those “moments,” where his decision determines the entire crew’s fate.  So it’s very important.

Moto also seems, because he is so quiet, that he may have secrets.  Is there something you can share that fans should be aware of and that they may not notice about him?

PAGE:  Moto is someone who wears his emotions on his sleeve.  I don’t think he has very many secrets that we don’t know about or that will be explored this season.  He’s pretty straightforward.  I think you will see an opportunity for him to be more involved in solving some of the cases.  We get to see that and I think he will surprise you in some of the things he knows.

So we can look forward to Moto getting in the midst of everything more and not being just in the background?

PAGE:  Exactly.  Sometimes in his earnest nature, he stumbles upon things that seem to be useful to the team.

He is observant that way and he seems hyper-aware at all times.

Because Moto interacts mostly with Backstrom on the job, he of course has to run into Valentine (Thomas Dekker) all the time.  But Moto seems to take Valentine in stride.  How do you think Moto sees Valentine?

PAGE:  (Laughs) I don’t know if Moto thinks Valentine is great for Backstrom.  I think Moto sees Valentine as someone who is a hinderance.  There is going to come a time where Moto has to give Backstrom some stern advice — some advice that may be unpopular, but it is just the way that he felts about Valentine.  So I don’t know how much Moto likes Valentine.  He just seems him as being a crook and a criminal, and that doesn’t go over well with police officers.

With so much comedy amongst all these dramatic cases, who cracks you up the most?  How is it hard to keep a straight face with?

PAGE:  Kris [Polaha] is really funny.  He makes me laugh.  Genevieve [Angelson] makes me laugh.  Rainn is typically in character since he has to do the bulk of the work.  So he is kind of in his space and in his head preparing.  But sometimes, when he goes out of that and goes back to his own nature, he is obviously the funniest.  He is just hilarious. Luckily, the show is like a dramedy.  So it’s a drama because it’s one hour and we’re solving murders, but there’s a lot of quirky humor in it.  So it’s pretty light a lot of times, anyway. There’s just a heavy amount of dialogue.  Not for Moto, fortunately.  (Laughs)

What’s coming up for Moto and the team that you can tease?

What do you love most about working on this show?

PAGE:  Being a cop.  This is my first time being not the right side of the law on screen.  (Laughs) So I like that.  I like having authority and walking around with a gun, legally.  And just kind of knowing that I’m in a space in the world where I can’t get in trouble — very much.  So that’s fun.  And this role is more subdued than the typical characters that I’ve played in the past.  That’s interesting for the development of myself, as an actor.  I embrace that because I need to be able to do something different and have it work.  So this has been an interesting ride for me and that’s one of the reasons I like the show a lot.

To see the result and repercussions of Moto’s testimony before the Oversight Committee and if his instincts as to Valentine prove to correct, be sure to tune in for all new episodes of BACKSTROM on Thursday nights at 9:00 p.m. on Fox.