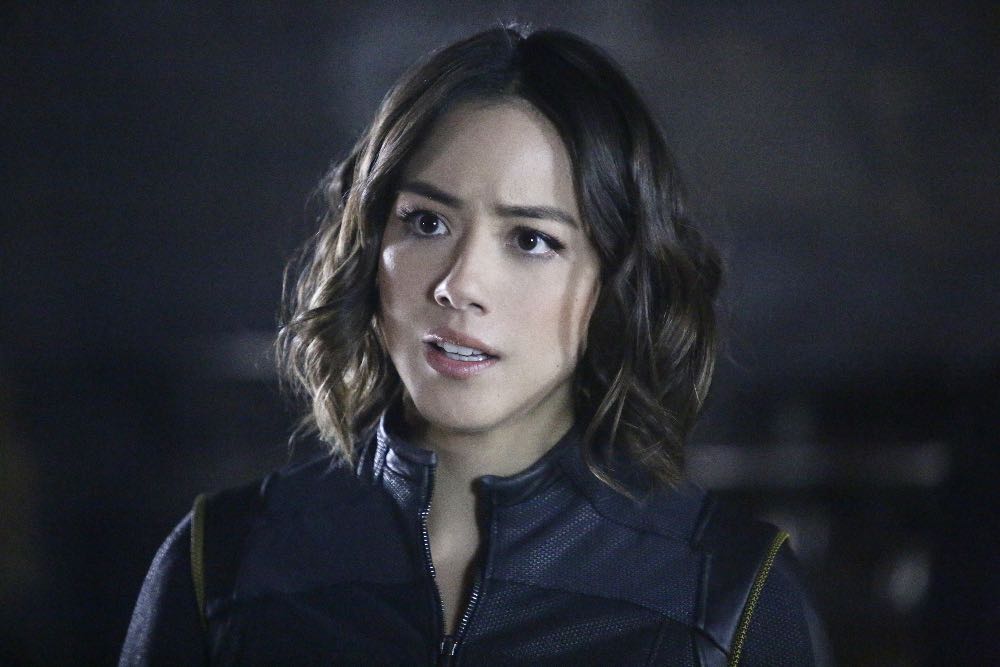 At the end of Season 3 of AGENTS OF S.H.I.E.L.D. , in a spectacular gesture of love and sacrifice, Lincoln Campbell (Luke Mitchell) took Hive, who was occupying the body of the man formerly known as Grant Ward (Brett Dalton), out into space and detonated a warhead killing them both in order to save the entire planet — thereby fulfilling Daisy’s (Chloe Bennet) prophetic vision and breaking her heart in the process. In an exclusive interview, Chloe Bennet talked about what this loss means to Daisy and what lies ahead in Season 4 of AGENTS OF S.H.I.E.L.D. and if there is any hope that Daisy could one day love again.

It is starting to look like your character is like a death knell for the men in her life after the double loss of both Ward (Brett Dalton) and Lincoln (Luke Mitchell) at the end of last season.
CHLOE: Yeah, she’s like the real Black Widow.

She kind of is. She’s just a harbinger of death!
CHLOE: [Laughs] Yes, exactly.

Are we to worry that Daisy thinks she cannot have a romantic interest in her life because she feels it might be doomed relationship from the start?
CHLOE: I worry about that for her. I really would like her to find happiness. I feel like after everything that she’s been through, she never really believes that she deserves it. So much has happened between her mom and her dad and obviously so much has happened last season, that I think her way of protecting the people that she is closest to, which is the team at S.H.I.E.L.D., that she is staying as far away from them as possible. That’s maybe the strongest reason, but in reality she’s actually being selfish because they are mourning too, and I think she can’t even handle it.

So Daisy just kind of wants to be on her own, but the team kind of needs her at the same time. Is she going to come back out of duty or because she just misses the team?
CHLOE: I actually don’t know. I’d like to find out. I know some people who do know. I have a feeling it’s going to be a situation where there’s no other option. But we’ll see. [Laughs] They don’t tell me anything.

The show has thrown you into the fray and is now counting on you to be kind of an action superhero. How is that?
CHLOE: It’s funny, at Comic-Con, they showed my audition scene with Brett Dalton and I looked back, and compared to that audition, she’s not the character that I’m playing even close to playing now. It was so much lighter. So much more comedy-based. And now, so much has happened to her, and all of a sudden like the superhero, the stunts, and all this stuff. It’s been so wonderful to have so much growth as a character they have given me. It’s like Christmas every year with how much they’ve given me as an actress and I feel like it’s been such a great way to grow. I’m young and I started out on the show — like I had an audition when I was 19 — and I’m 24 now and it’s been an amazing journey through and really going on and off screen.

Do you look at the writers and go, “You know — I don’t have to kill somebody or kick somebody in every scene and episode”?
CHLOE: [Laughs] I know. But, secretly, I love it because it’s really fun to shoot.

What would you like to kind of see in the future for Daisy?
CHLOE: I’d just like to see her happy. I really want her to be happy. Whatever that means for her and having some peace. I think she’s always kind of restless and feeling responsible for the Inhumans, at this point. So I think that will always weigh heavy on her. I’m okay, but I hope that she’s able to kind of focus on herself and find real happiness — whether that means love or something else.

She’s known a lot of pain, but she’s handled it pretty successfully, considering.
CHLOE: Yeah. People ask me if she’s gone rogue — like she doesn’t care about the team. I think my very favorite part about playing Daisy is she’s so empathetic and she has such a big part and she cares so deeply for people. That’s one of her biggest strengths and weaknesses. So that is why she’s distancing herself. She doesn’t want to. She loves this team so much, but I think she feels like she’s protecting them because whenever she gets close to people, they die.

Now that Daisy is kind of allowed to grieve a little bit, how does she feel about her past romantic relationships?
CHLOE: I think she’s really fucking upset. Lincoln died saving her and saving the world, and I think she feels a level of responsibility. Because I know she was ready to sacrifice herself and it’s heartbreaking. I can’t imagine living in that state of mind last season, while we were shooting. That was really difficult. So even just like pretending to be in that state of mind was difficult. So I can’t imagine actually being there.

Is she only mourning Lincoln at this point or does she mourn Ward too?
CHLOE: Only Lincoln. Luke — I miss him!

To find out what inner turmoil Daisy wrestles with and if another love could overcome the grief she feels after losing Lincoln and if she will rejoin S.H.I.E.L.D., be sure to tune in for the Season 4 premiere of AGENTS OF S.H.I.E.L.D. on Tuesday, September 21st at 10:00 p.m. on ABC.