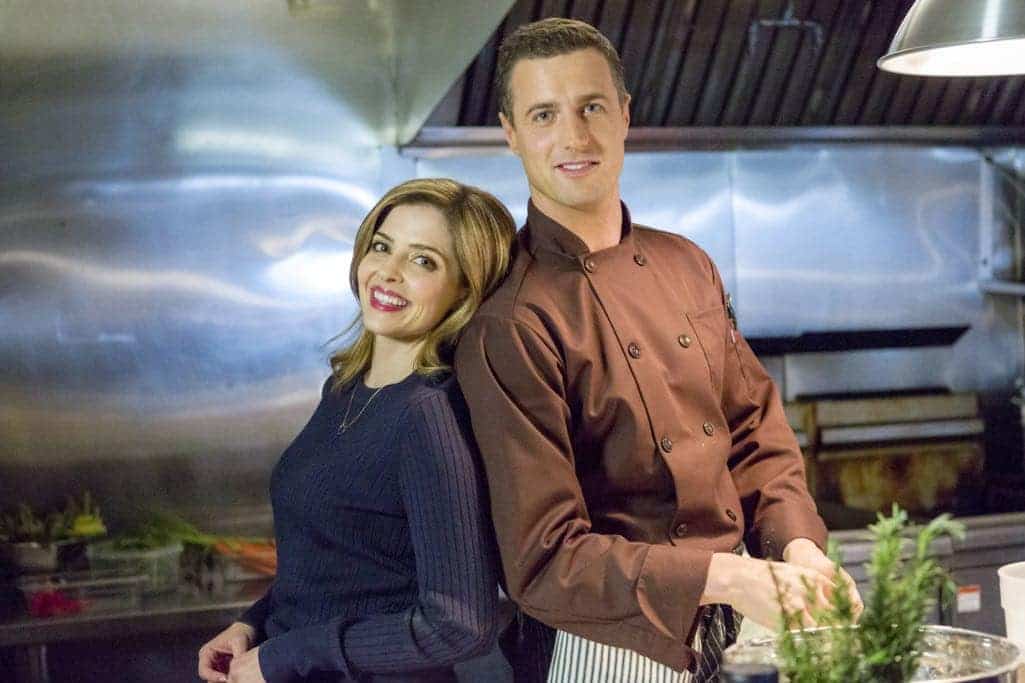 Hallmark Channel’s latest Countdown To Valentine’s Day film “A Dash Of Love” offers a feast for the eyes with a side dish of romance. When a young aspiring chef Nikki (Jennifer Lilley) finds herself fired alongside a seasoned chef Paul (Brendan Penny), they team up to open their own restaurant and discover they are serving up more than tantalizing meals — they are spicing up the ambiance with a dash of love. In an exclusive interview, co-writers Sandi Berg and Judith Berg share what inspired them to write this Valentine film which they infused with more than a touch of romance and heart full of love.

What made you want to get involved with Hallmark’s “A Dash Of Love”? What sparked your interest?
SANDI:  We liked the story and the idea of an accomplished Cordon Bleu chef facing off with a self-taught wannabe chef. It seemed like there could be a lot of possibilities for both comedy and romance.

Had Brendan Penny and Jennifer Lilley already been cast for the project when you came on board? And if so, did that inspire you to write towards them in portraying the characters?
JUDITH: They were cast after we turned in our first draft. Since we knew and enjoyed their work, it definitely helped to know their voices when we worked on our final draft.

If you have seen the final film version, which scene were you so excited to see Brendan and Jennifer bring to life on screen?
SANDI:  Definitely their dance at the pop-up restaurant. We always wanted a wonderfully romantic tune for that scene and we were thrilled they got Frank Sinatra’s “The Way You Look Tonight.” And Brendan and Jen definitely have on-screen chemistry.

What are your favorite scenes to write?
JUDITH:  We love to write scenes with a lot of fun — and hopefully witty — banter between the characters. We also try to inject some physical comedy if fits the movie. For instance in “Love on the Sidelines,” Emily Kinney not only gets knocked down by a Great Dane, but she also struggles to carry a 50 pound bag of dog food.

As writing partners, do you divide up the scenes or is it more collaborative as a whole for the script?
SANDI:  We write everything together. We throw out ideas, lines, character bits to one another, and decide which works best. We don’t always agree, and there’s a lot of give and take, until we find the best version.

When you sit down to write, is it a quiet writing zone or do you use music, food, atmosphere to inspire you?
JUDITH:  We need a quiet zone since we talk everything out together. Music helps with certain projects, but we keep it in the background.

What do you think helps get the creative juices flowing?
SANDI:  Fortunately, we’re inspired every day because we love writing, and it’s a bonus to be working on upbeat, romantic films.

Then what helps inspire to write Hallmark’s style of stories of love and romance?
JUDITH:  Watching old movies is always inspiring. We particularly love the Cary Grant, Claudette Colbert, Katharine Hepburn classic comedies of the 1930s and 40s. Some of our favorites are “It Happened One Night,” “The Shop Around the Corner,” “The Awful Truth,” “Sabrina,” just to name a few.

What do you see as the over-arching theme to “A Dash Of Love”?
SANDI:  Not to give up on your dreams – whether you’re a chef or even a writer. It’s a universal theme that so many of us can relate to.

What do you hope the fans and viewers take away from watching the film?
JUDITH:  First and foremost, we hope they were entertained, but after watching the film we hope it inspires people to go out and have a romantic dinner with someone special.

To see what delicious concoction Sandi and Judith have whipped up for fans, be sure to tune in for the premiere of “A Dash Of Love” on Saturday, February 11th at 9:00 p.m. on Hallmark Channel.

Tags
A Dash Of Love