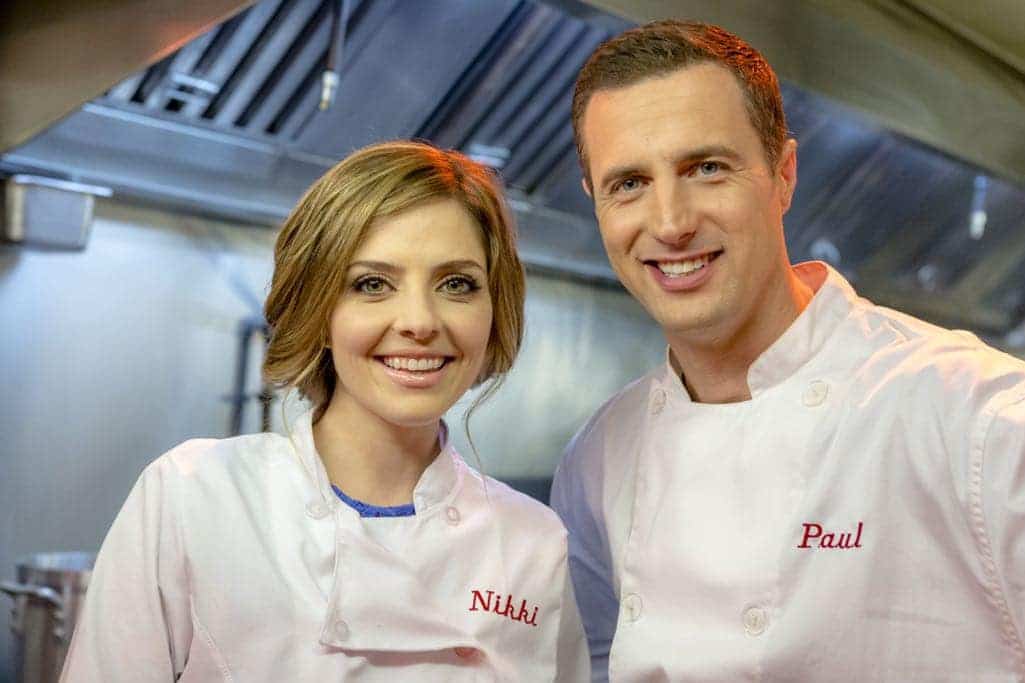 Hallmark Channel’s latest Countdown To Valentine’s Day film “A Dash of Love” offers a feast for the eyes with a side dish of romance. When a young aspiring chef Nikki (Jennifer Lilley) finds herself fired alongside a seasoned chef Paul (Brendan Penny), they team up to open their own restaurant and discover they are serving up more than tantalizing meals — they are spicing up the ambiance with a dash of love. In an exclusive interview, co-stars Jennifer Lilley and Brendan Penny share a few fun tid-bits from their cooking adventures as their characters fell in love.

Jennifer, tell me about your character in “A Dash Of Love.”
JENNIFER:  I play a cook who is an aspiring chef who falls in love with an executive chef, and of course, as Hallmark would have it, we don’t fully get along at first. But it’s very cute and it’s so much fun to shoot. It’s very like “When Harry Met Sally,” so sweet and fun, very Meg Ryan and Tom Hanks. It’s awesome.

And what attracted you to the role?
JENNIFER:   I’ve always wanted to work for Hallmark Channel. Honestly, my mom is such a fan of Hallmark.  And it’s really romantic. My mom was chef and I used to make wedding cakes, so I also love cooking. A lot of things fit. I read the character, I was like “I am Nikki.” She’s kind of a clumsy. She kind of puts her foot in her mouth a lot, that’s what I do. Never being rude, she rambles — which I’m doing right now!  It’s so fun.

When you first read the script, what jumped out and grabbed your attention?
JENNIFER:   The very first scene that grabbed my attention was probably the job interview. It was a really early scene, but the character goes to all these job interviews because the diner she works at is closing, just because the guy is retiring, and it’s a very successful diner. So she decides to go on all these job interviews, as you do when you know your place of employment closes. What I loved was that she was so endearing. Nikki just rambles and rambles and when she gets really uncomfortable she just keeps going. I completely understood that and I thought it was really funny. I knew exactly how to play it. Hallmark called me so there wasn’t much decision about it, but when I read the script I was just completely in love with it. I think it’s very smart.  It had really cute little jokes in it. I just loved everything.

Spicing things up with humor is always fun.
JENNIFER:   Romance should always have humor. Always. Meg Ryan was the reason I wanted to become an actress. I love romanticfilms. I think they’re so underrated.

Which is your favorite Meg Ryan movie?
JENNIFER:   Oh man, I guess I’d have to say “When Harry Met Sally,” but at the same time, “You’ve Got Mail” is brilliant and “Kate & Leopold” is in the running. She’s really brilliant. Great actress.

What did you like about working with Brendan Penny?
JENNIFER:   Oh my gosh, he’s so funny! He’ll constantly making me cry with laughter. He’s so funny, he’s so smart, he’s such a family guy, and so humble. He is his character. He’s like a dream boyfriend. Amazing. Such a good guy.

This film is about romance in the kitchen. Is there anything you found kind of complicated or difficult to film in as far as being in the kitchen?
JENNIFER:   I was really worried about the cutting scenes because I’m actually a really good cook, but I do not have knife skills. Brendan luckily has knife skills and was able to teach me, so there you go.

And your characters used real knives?
JENNIFER:   They did. [Laughs]  They probably shouldn’t have, but they did. We didn’t do fast chopping, but I was so nervous.

So there were no knife throwing scenes then?
JENNIFER:   [Laughs] No throwing of the knives, thank goodness.

And Brendan, how did you get connected to the project? What attracted you to it?
BRENDAN:  It always starts with the agent. My agent called me and told me about this project that was possibly available. First thing I asked was, “Who’s starring in it?” And she said Jen Lilley, and knowing Jen’s work–  I’ve heard a lot of great things about her — I was interested. So I became familiar with the script, and it was really cute.  It was exactly what a Valentine’s movie should be. It is. It’s very sweet. There’s not a lot of crazy drama. It’s just sweet, light, fun, and Jen is fantastic.

What was a fun scene that you enjoyed working with Jen on?
BRENDAN:  [Laughs]  Almost every scene was fun with Jen. We would get the giggles, more so that usual on any project, but there was one scene that was particularly tough for us. ‘Cause we’re both chefs in the movie, it’s this one scene where we are serving this soup at a soup kitchen together, and unfortunately, the soup of the day was very bad. It was very, very, terrible. It smelled terrible. And she had to feed me a bite, and she couldn’t stop laughing ’cause it was so bad. She felt bad every time. And we didn’t get one take on my coverage where she wasn’t laughing. So with that scene, when you’re watching, it’s all on me. That’s because she kept laughing. It was a giggle-fest.

Jennifer also mentioned there was an issue where she was worried about using all the real knives on the show.
BRENDAN:  [Laughs]  Yeah, she’s kind of dangerous! You’ve got to watch out. It was funny. They shoot her stuff, and they shoot mine, right? I do cook a lot, and I know how to use the utensils, I guess, properly. And it was pretty fun. But doe her scenes, they had a stunt cutter for her.

They wouldn’t let her use the real knives, huh?
BRENDAN: Well, they let her use it, but only to an extent where it was getting close enough.

Then they were like, “okay, we’re bringing in a stunt double.”
BRENDAN: [Laughs] Yeah, exactly.

Was there a particular scene that you loved for your character?
BRENDAN:  The thing that I really liked about my character is that he had a really strong opinion and he wasn’t just one level. He really was passionate and cared about what he did. So it wasn’t one scene in particular. I just really enjoyed the character. I like where he came from. That said, the nice romantic scene at the end, which I can’t ruin, that was a really nice scene to shoot with Jen. Well, not the very end one, but there’s that one, and then there’s another one where we have this very nice kind of impromptu slow dance. It was honestly really, really nice. She’s so great. It was so easy to work with her.

What do you love about Valentine’s Day?
BRENDAN: Optimism.  Valentine’s Day is full of optimism. Full of love, and when you come from love, you’re only coming from the heart.

To see what delicious concoction of love, romance and heart that Jennifer and Brendan are serving up for fans, be sure to tune in for the premiere of “A Dash Of Love” on Saturday, February 11th at 9:00 p.m. on Hallmark Channel.