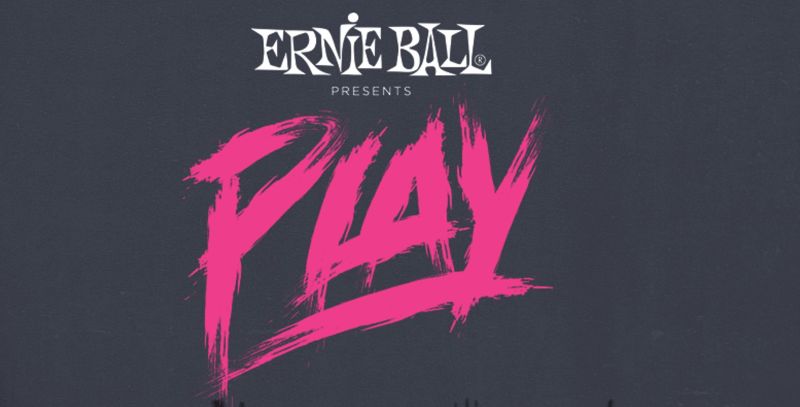 Ernie Ball, the world’s premiere manufacturer of musical instruments, guitar strings and accessories today announced Ernie Ball PLAY Warped Tour, the 20th installment of the family-owned instrument manufacturer’s annual unsigned artist program. Submissions begin today, allowing bands across the country the chance to be selected to receive career-altering opportunities and prizes. Ernie Ball has helped the careers of many well-known past participants, including members of Maroon 5, PVRIS and Nothing More.

“Ernie Ball’s Battle of the Bands was a game-changer for me. That contest is the reason I was able to make the move from Nebraska to L.A. and start this 15 year odyssey of a career,” says James Valentine, lead guitarist of the GRAMMY® Award-winning band Maroon 5. “It’s great that Ernie Ball gives this gift back to the music community. It’s a big part of why I chose to work with them on the Valentine guitar: they actually care about the players and are a big part of the community as a whole.”

Now in its 20th year, Ernie Ball’s longstanding unsigned artist programming in partnership with the Van’s Warped Tour has become one of the leading platforms for up-and-coming acts, giving unsigned artists across the nation an opportunity to perform at some of the largest events and tours in the country. With thousands of bands participating annually in the competition, it has become a staple for the festival every year.

“The Vans Warped Tour is honored to partner with Ernie Ball for the PLAY Warped program, giving unsigned bands the opportunity to play the Tour each summer,” said Kevin Lyman, Vans Warped Founder. “Ernie Ball, together with the Vans Warped Tour, has been an important avenue for bands to jumpstart their careers. Through this partnership, it is our continued goal to encourage and support up-and-coming musicians and propel them to the next level.”

“I started this program twenty years ago because the opportunity to experience playing music live seemed to be dwindling,” said Ernie Ball CEO Sterling Ball.  “The opportunities are even fewer and far between today.  That makes us even more passionate about continuing to create the programs that give bands the exposure and experience of playing these world class events.”

NOTE: One band per tour stop will be chosen to perform on the Vans Warped Tour Main Stages, with one band from the 41 winners being chosen as the grand prize winner.

About Ernie Ball:
In 1962, veteran player and teacher Ernie Ball created Slinkys®, the iconic light gauge electric guitar strings widely revered by hundreds of guitar greats including Eric Clapton, Keith Richards, Jimmy Page, Paul McCartney, Metallica, Brad Paisley, Slash, John Petrucci, The Edge and John Mayer. In addition to industry-standard strings, as well as hand-crafted high-end Music Man® guitars and basses, Ernie Ball Inc. offers state-of-the-art instrument accessories that are carried in more than 6,000 stores in the U.S. and 120 countries worldwide. The family-run company maintains its founder’s dedication to preserving the musician’s playing experience and delivering superior sound quality through the development of new products, such as Cobalt Slinkys, M-Steel, Earthwood and the revolutionary Element Shield Packaging, which hermetically seals guitar strings to keep each set as fresh as the day they were made. The company also fosters artist development through musician-focused programs such as the world’s largest and longest running Battle of the Bands, where unsigned bands compete each year for the chance to play live on national tours, festivals and events. Visit them online at www.ernieball.com and www.music-man.com