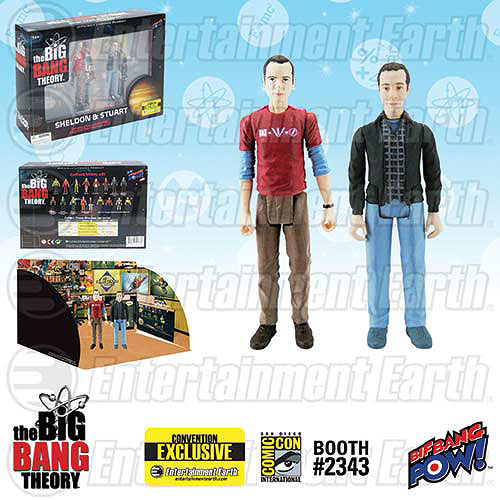 Our special edition THE BIG BANG THEORY Sheldon and Stuart 3 3/4-Inch Action Figures Set of 2 – Convention Exclusive is made exclusively by Bif Bang Pow! for Entertainment Earth as a convention exclusive! In his first ever action figure, this comic book owner is sporting his sweater jacket and button down plaid shirt combo. It’s all tied nicely together with his blue jeans and not-so matching blue shoes. His theoretical physicist pal is dressed in a red alternate mathematical equation T-shirt and rounds out the look with tan pants and brown shoes. Their apparel is inspired by outfits worn by both characters from actual episodes of the series!

Both figures feature 5 points of articulation at the neck, shoulders and hips. As an added bonus, the individually numbered packaging includes a fold-out diorama similar to Stuart’s comic book shop (pre getting burnt to a crisp.) This 2 figure Entertainment Earth Convention Exclusive is a limited edition of 2,400 sets! It’s enough to make you exclaim, BAZINGA!™.

Available for the first time on July 8, 2015 at the Entertainment Earth booth #2343 at San Diego Comic-Con, fans will have the first opportunity to grab this individually numbered and limited edition exclusive!

(*NOTE: Pre-orders made before San Diego Comic-Con 2015 are not guaranteed to be fulfilled based on limited supplies. Available units will ship after Comic-Con 2015 while supplies last.)