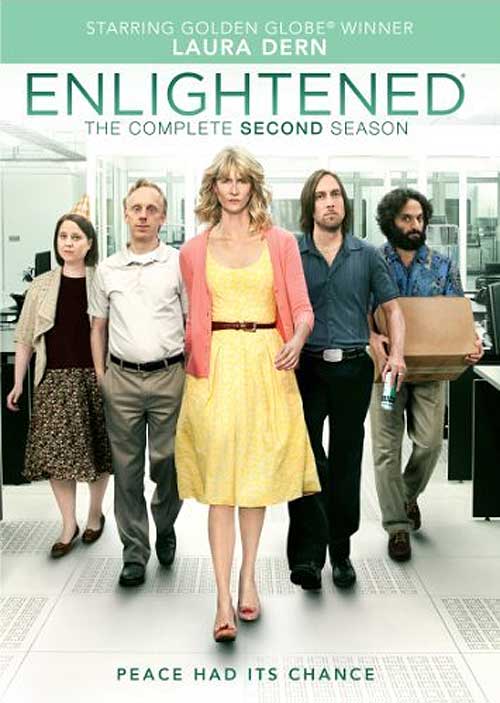 Seat42f and HBO Home Entertainment have teamed up to give THREE lucky winners a copy of ENLIGHTENED Season 2 on DVD. For a chance to win leave a comment below telling us why you want to add ENLIGHTENED Season 2 to your DVD collection. Only one entry per person. Contest ends August 22nd. Winners will be notified on August 23rd via email so make sure to use a valid email address when you post your comment.

A unique blend of comedy and drama, Enlightened follows a self-destructive corporate executive Amy Jellicoe (Laura Dern), who had a spiritual awakening after a career-destroying meltdown. Though determined to live a more enlightened existence, her new outlook only wreaked more havoc, both at home and at work. On August 13, 2013 Enlightened: The Complete Second Season debuts on DVD ($39.98) and Digital Download with “Inside the Episodes” summaries and three audio commentaries with cast and crew including Laura Dern, Mike White, Molly Shannon, Luke Wilson, Dody Dorn and Dermot Mulroney.

Enlightened was praised by critics as “bold, hilarious, tremendously moving” (Entertainment Weekly) and “great comedy” (New York Magazine) and earned Laura Dern a Golden Globe for Best Actress in a Comedy for her performance. At the conclusion of season one, Amy Jellicoe finally presented her research on Abaddonn Industries’ misconduct to the company, only to be laughed out of the room. Undeterred, she became more determined to bring down this bastion of corporate greed and corruption and enlists the help of an investigative journalist. As they work together on a searing exposé, she dreams of a “bigger” life and develops romantic yearnings for the handsome, well-traveled reporter. Meanwhile, Amy’s ex Levi continues to struggle with rehab and it remains to be seen whether Amy will embrace him again as the man she always wanted him to be.

Along with Dern, who also executive produces with Mike White (who co-stars,writes and directs), the series features an all-star ensemble cast including Luke Wilson as Levi and Diane Ladd, Dern’s real-life mother, as Amy’s disapproving mother Helen, Sarah Burns as Krista, the former assistant who has taken Amy’s old job and Timm Sharp as Amy’s sleazy boss, Dougie. Guest stars on the second season include Dermot as journalist Jeff Flender, Michaela Watkins as snooty colleague Janis, Amy Hill as Judy, the no-nonsense HR rep who won’t give Amy a break and Molly Shannon as the executive assistant to Abaddonn’s CEO.