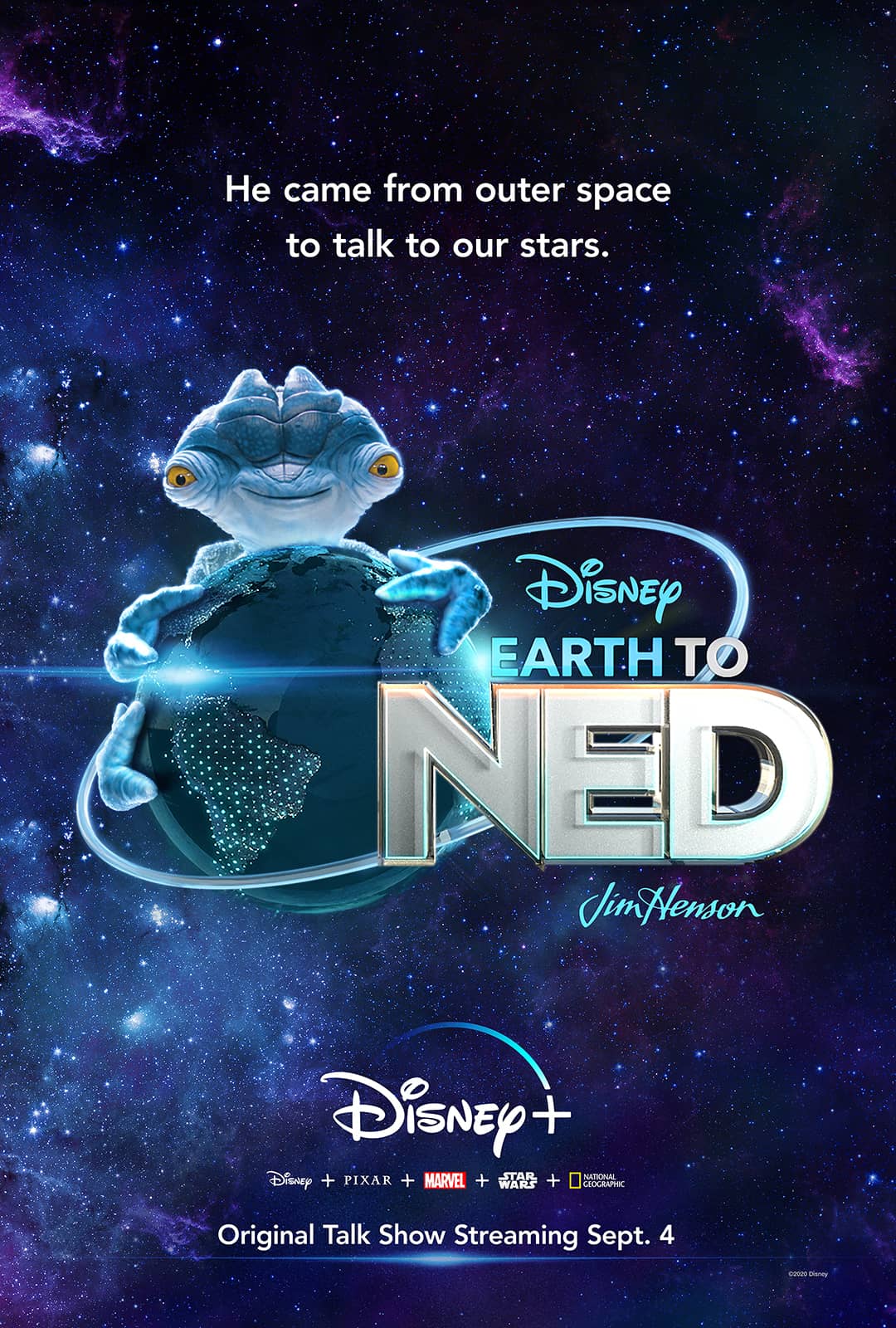 EARTH TO NED From The Jim Henson Company Beams Onto Disney+ September 4 – From The Jim Henson Company comes a brand new talk show hosted by alien commander Ned and his lieutenant Cornelius, who call off the invasion of Earth after they fall in love with human culture. Broadcasting from the bridge of their spaceship, hidden deep underground, Ned and Cornelius interview Earth’s greatest resource, celebrities. With the help of the ship’s artificial intelligence, BETI, and the destructive CLODs (Cloned Living Organisms of Destruction), Ned must keep his show a secret from his home planet or suffer the wrath of his father, the Admiral of the Galactic Fleet.

Each episode focuses on a topic or theme that is both equally unique to earthlings and fascinating to Ned, including comedy, sports, social media, and fashion. Ned beams in celebrity guests from across the known universe to put on the ultimate chat show, and the more he learns about our human culture, the more obsessed he becomes.

Ned, Cornelius, their Artificial Intelligence BETI, and army of CLODs are brought to life by Jim Henson’s Creature Shop, the team behind some of Hollywood’s most iconic characters.

About The Jim Henson Company
The Jim Henson Company has remained a leader in family entertainment for over 60 years and is recognized as an innovator in puppetry, animatronics, and digital animation. Best known as creators of the world-famous Muppets, Henson has received over 50 Emmy Awards and nine Grammy Awards. Henson’s most recent television credits include Fraggle Rock: Rock On! for Apple TV+, and the critically acclaimed Netflix Original series The Dark Crystal: Age of Resistance, along with the Emmy®-nominated productions Dinosaur Train (PBS), Sid the Science Kid (PBS), Splash and Bubbles (PBS), and Julie’s Greenroom (Netflix), as well as Word Party (Netflix), Dot. (Universal Kids /Hulu), and Doozers (Hulu/Universal Kids). Previous productions include Fraggle Rock, The Storyteller, and the sci-fi series Farscape for TV, and the feature films The Star (Sony Pictures Animation), Alexander and the Terrible, Horrible, No Good, Very Bad Day (Disney), as well as The Dark Crystal, Labyrinth, MirrorMask, and Jim Henson’s Turkey Hollow. The Company is currently in production on the upcoming series Harriet the Spy for Apple TV+, Earth to Ned for Disney+, Guillermo Del Toro’s Pinocchio for Netflix, and a reboot of Fraggle Rock for Apple TV+.

With additional locations in New York and London, The Jim Henson Company is headquartered in Los Angeles on the historic Charlie Chaplin lot, complete with soundstage and post-production facilities. The Company is home to Jim Henson’s Creature Shop™, a pre-eminent character-building and visual effects group with international film, television, theme park and advertising clients, as well as Henson Recording Studios, one of the music industry’s top recording facilities known for its world-class blend of state-of-the-art and vintage equipment.

About Marwar Junction Productions
Joseph Freed and Allison Berkley are the founders of Marwar Junction Productions and the Executive Producers of Eli Roth’s History of Horror (AMC), the documentary anthology Autobiography (A&E), pop-culture talk show Bossip (WEtv) and true-crime series Murder in the Thirst (BET) and The Object of Murder (ID). Other productions include Warren Jeffs: Prophet of Evil (A&E) and the scripted film I Am Elizabeth Smart (Lifetime), which was nominated for two Critics’ Choice Awards, including Best Movie Made For Television.

Tags
Disney Plus Earth To Ned