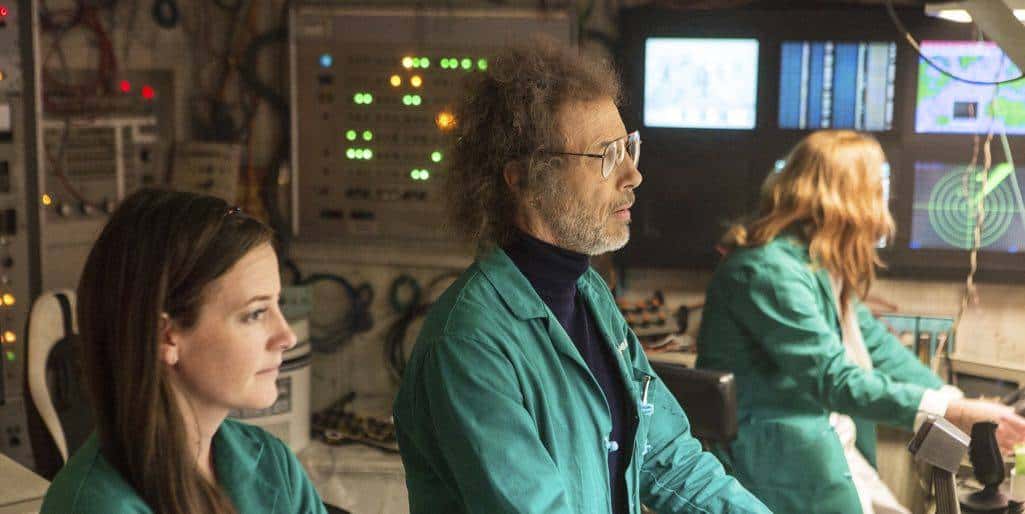 Adult Swim’s newest series is DREAM CORP, LLC, premiering this weekend. Like many recent entries in the Cartoon Network’s nighttime block, DREAM CORP, LCC is live-action, not animated. It follows the office goings-on of Dr. Roberts and his not-so-crack team of doctors, nurses, and interns as they analyze patients’ dreams. Will they manage to help anyone? That seems unlikely.

Roberts is played by John Gries (Taken). As the lead, as much as there is a lead on this show, he sets the tone for the rest of the series. His maniac performance, alternately crazy and crazier, is that of a mad scientist, not a healthcare professional of any stripe. Which fits with the rest of the cast and setting.

Roberts is surrounded by the exact type of team you’d expect such a “doctor” to attract. Colleague Randy Blink (Mark Proksch, The Office) is a weirdo who definitely has some sexual perversion, even if it’s not immediately apparent what stripe it is. Nurse Ahmed (Ahmed Bharoocha, Dead Kevin) is lazy and nearly useless, barely doing a job at all. Intern Joey (Stephanie Allynee, One Mississippi) practically worships the doctor, and is the only somewhat competent one present, though her acceptance of everything around her means that the competence isn’t going to save anyone. And T.E.R.R.Y. (Stephen Merchant, Hello Ladies, The Ricky Gervais Show) is a sarcastic robot, because, why not?

The lab they work in is a chaotic mess. It looks to be from a lunatic asylum, not unlike Gotham’s Arkham, but with way more trash strewn about and wires not plugged in where they should be. There are stains and clutter in the small space, and the reception area is very outdated, including the computer used. It’s not a place that would inspire any confidence whatsoever in any who would enter.

So the main question I’m asking is, why would anyone come to them? Certainly, the pilot’s subject, Patient #088 (Nicholas Rutherford, Golan the Insatiable), displays many signs of nervousness upon entering. He makes to leave multiple times, and realizes pretty early on that he’s made a mistake. Yet, he inexplicably stays. He also cites a TV commercial having drawn him to DREAM CORP, LLC, yet I can’t imagine any commercial made by this crew would be the slightest bit enticing.

For me, in order to enjoy a television series, the world it inhabits must make some kind of sense. It doesn’t have to be totally realistic or understandable, but it can’t just be utterly ridiculous. If these healthcare workers were to run a lab like this, it couldn’t possibly be in our reality, where common sense and regulations would shut it down, and normal people would never wander in, or if they did, would then flee immediately. And yet, that’s exactly what appears to be presented. Granted, the running time is only ten minutes, but for the full ten minutes, I never managed to really get into this, finding it completely inaccessible.

Now, I know not everyone will feel that way. I have seen shows with a similar sensibility before on this very network. But those were the Adult Swim programs I chose not to watch, and DREAM CORP, LLC will not be going on my list to view, either.

There were a couple of things I liked. Joey was easily the most enjoyable character. The rotoscoping (think a-ha’s Take On Me music video) dream sequence was artistically interesting. Dave Coulier (Full House) does a funny cameo as himself. So the whole episode was not without some merit. Just not enough to entice me to ever give it a second chance.