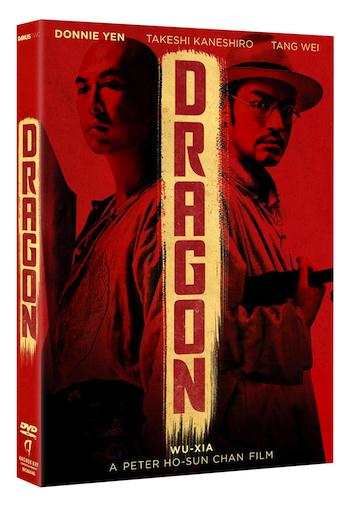 Seat42f and Anchor Bay Entertainment have teamed up to give THREE lucky winners a copy of DRAGON on DVD. For a chance to win leave a comment below telling us why you want to add DRAGON to your DVD collection. Only one entry per person. Contest ends April 30th. Winners will be notified on May 1st via email so make sure to use a valid email address when you post your comment.

Liu Jin-xi (Donnie Yen) is a village craftsman whose quiet life is irrevocably shattered by the arrival of two notorious gangsters in the local general store. When Liu single-handedly saves the shopkeeper’s life, he comes under investigation by detective Xu Bai-jiu (Takeshi Kaneshiro). Convinced that Liu’s martial arts mastery belies a hidden history of training by one of the region’s vicious clans, Xu doggedly pursues the shy hero—and draws the attention of China’s criminal underworld in the process.

The DRAGON Blu-ray™ and DVD special features include: “The Making of DRAGON,” Featurettes with Donnie Yen and the “Lost in Jianghu” Music Video.