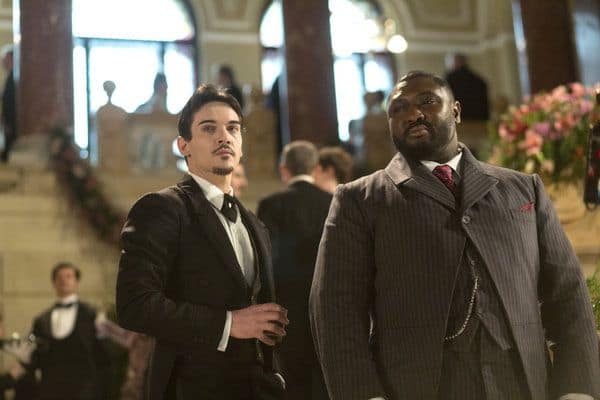 NBC’s DRACULA, premiering this week paired with Grimm, is surprisingly good! It has not been taken to the modern day (although the 1890s is modern by Dracula-legend standards), does not have anyone solving crimes, allows most characters to speak with non-American accents, and is set in London, England. I never thought one of the Big Four networks would deliver something like this.

DRACULA does differ quite a bit from the novel of the same name. In this version, Dracula (Jonathan Rhys Meyers, The Tudors) is awoken from his slumber nearly 500 years after the death of his wife. He is intent on stopping the Order of the Dragon, a secretive group that murdered his beloved, and are still around today. Since they are oil barons, poised to control the energy industry of the coming century, Dracula seeks to circumvent them with another power source.

Which is not to say that Dracula is fang-less, far from confined to the business world, which is conducted in parties, not boardrooms. We see him skulking the streets and rooftops, preying on those with the blood he needs to survive and dueling with vampire hunters who seek to kill him. While DRACULA is not gory, there is a creepiness about him and the show, and Meyers makes the character radiate threat.

The weird thing about the way the titular character is portrayed is that he is frequently forced to fake an American accent to keep up the persona of Alexander Grayson, the colonial entrepreneur he is pretending to be. Meyers’ lilt seems strange and off. One might say that the character is faking the accent, too, so this is OK, but he’s supposed to be faking it well, and he doesn’t. The scenes in which Meyers switches back to a European timbre are better.

Stylistically, DRACULA is interesting. It maintains some of the best elements of the character, especially the danger, but puts it in a new setting, and not a lazy one a bunch of other shows already share. Many of the variations with the source material seem well thought-out and make sense to the tale being told. The sets and costumes look pretty cool, though may not be accurate, and there’s kind of a steam-punk feel to the technology Dracula is playing with.

The major characters from the novel are present in DRACULA, but most have departed a bit from their origins. Renfield (Nonso Anozie, Game of Thrones) is still the vampire’s manservant, but he is also a former slave, and there is no sign of him snacking on insects. Van Helsing (Thomas Kretschmann, The River) remains an intelligent, educated man, but is willing to compromise his principals for the greater good. Mina (Jessica De Gouw, Arrow) and Lucy (Katie McGrath, Merlin) are very pretty, but are not as weak.

The one person that hews closest to the novel is Jonathan Harker (Oliver Jackson-Cohen, Mr Selfridge). A dedicated reporter and boyfriend of Mina, Jonathan wants to know what Dracula is up to, but is mostly in the dark. He’s earnest and smart, and while he does come across as a little gullible at the start, he will likely rise above it, though perhaps not in a way that will pose a threat to Dracula.

The question is, will Harker be the hero of DRACULA? If not him, who? Van Helsing isn’t acting too noble in the first episode. Instead, if anything, the program seeks to make Dracula sympathetic. Immediately, viewers will begin to root against the vampire king’s enemies, hoping that he can gain some kind of revenge against them. Except, any scene where Dracula isn’t directly working on this mission doesn’t paint him in a good light, either. Is DRACULA actually daring to live in the grey, murky middle, with each player having their strengths and faults, but none clearly in the right or wrong? Because that would be amazing.

To accomplish that, the villains must be given layers, too. This wouldn’t be so hard. Yes, they are guilty of ruining Dracula’s life, once upon a time, or rather, their forbearers were. But Dracula is an undead creature of the night that deserves to be punished, right? With none of the Order of the Dragon among the main cast, I don’t know how much time might be spent developing them, or if they are merely a distraction until other roles can be grown into serious contenders.

One character that is not in the book, as far as I recall, but is part of the main cast, is Lady Jane (Victoria Smurfit, Trial & Retribution). She is fascinated with Dracula, and quickly puts the moves on him, despite being married herself. If Dracula isn’t going to feed on Lucy or Mina yet, he needs a replacement to seduce, and Lady Jane fits the bill. I’m just not sure where they are going with her.

DRACULA has its flaws. Some of the dialogue is cheesy, the direction isn’t clear, the Order of the Dragon is a very nebulous challenge, the first scene between Dracula and Van Helsing reads extremely staged, and the style and setting isn’t likely to appeal to an NBC audience. However, it’s more intelligent than much of the network’s fare, and hopefully the horror element will draw Grimm’s fans to it, allowing it time to show us what it can do. DRACULA could be really good. It isn’t quite yet, but it could be, and because of the risks it takes, it’s worth giving a chance to.

DRACULA premieres this Friday at 10 p.m. ET on NBC.