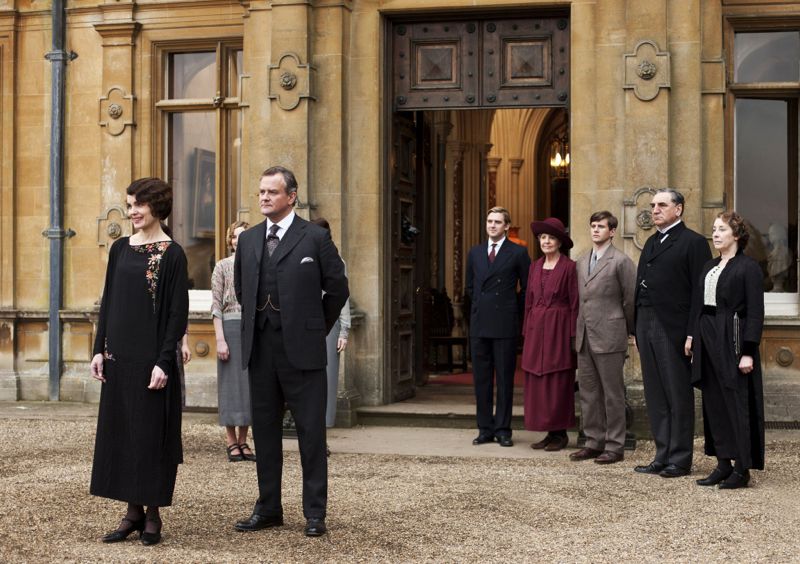 The British series DOWNTON ABBEY returns to PBS this week with the first two hours of its fourth season. It’s been six months since the events of last year’s finale, and while life has gone on for much of the household, there are a couple of individuals finding it hard to get past their sorrow. This is the focus of much of the first couple of installments, though likely won’t dominate the year.

DOWNTON ABBEY is the kind of series that takes a long time to make changes. Characters and plots do grow, but the development is slow, over the course of many episodes or even seasons, rather than immediate. That means that the latest episodes feel more like a continuation of the same familiar tale than the start of anything new.

Many fans have been waiting most anxiously to find out how Lady Mary (Michelle Dockery) is doing. Having lost her husband, Matthew, in the season three finale, as one might expect, Mary is anything but adjusted in season four. She is numb with grief, not having dealt with her feelings yet, even though a good amount of time has passed. This leaves her unable to function much at all.

Those who surround Mary are divided over how to treat her. Her father, Robert Crawley (Hugh Bonneville), thinks she should be protected from the world, shut away until she is ready to come out. Brother-in-law Tom (Allen Leech) and grandmother Violet (Maggie Smith) think quite the opposite, believing that putting Mary to work will draw her out of her cocoon. A few others get the chance to put in their opinions before this is resolved.

The question raised here is not necessarily the best way to move on from sadness, but what is right for the individual in question. While Isobel Crawley, the departed’s mother, is also lost at first, the way Mary and Isobel come out of it, similar as it may be, definitely relates to their personalities. Grief is a deep emotion, tricky to navigate, and DOWNTON ABBEY does a fair job working through these situations, keeping them interesting and authentic to the characters.

Although Matthew is dead, he still instigates one more development, which makes quite a bit of impact late in the two hours. It’s not something hokey or contrived, really, but rather a natural story point for the established characters. Without spoiling anything, I will say the person most affected is Mary, and fans of the couple should be quite pleased. It also moves the story along in a direction that should be seen coming, but feels a bit surprising, in a good way. I look forward to see where it goes from there.

Lady Edith (Laura Carmichael), Mary’s sister, also faces some change in her life. Hers is a bit more predictable, but still, it’s nice to see plot for an interesting character.

The servants’ side of things is no less served. Mr. Molesley (Kevin Doyle) finds himself out of work now that Matthew is deceased, cards from secret admirers shake up the house (which leads to an incredibly sweet scene that I didn’t see coming), someone who rejected a potential romantic partner may be changing their mind, a new appliance is added to the kitchen, and a figure from Mr. Carson’s (Jim Carter) past reaches out. All of these are fun and compelling stories that keep the same spirit fans of the show love. It also helps balance out the more depressing stuff, making for a nice flow and tone.

Of course, not everyone sticks around forever. As had been widely reported last summer, Mrs. O’Brien (Siobhan Finneran) is out, a fact dealt with very early on. But, in keeping with DOWNTON ABBEY’s propensity to bring back familiar faces, even those who seemed to be brief stories that already ran their course, O’Brien’s replacement is someone we’ve seen before. And she’s not the only one from earlier seasons whose name pops up again.

I don’t completely like the method of O’Brien’s departure as I’m not completely sure it’s in keeping with who she is. O’Brien is known to be extremely loyal to Cora (Elizabeth McGovern), ever since that incident a few years back. Yes, O’Brien doesn’t always feel appreciated (because she isn’t), and her leaving is telegraphed last season, but it still seems just a little off. Hopefully this will be resolved with a future appearance, as the story leaves the door open for a return, at least in a guest starring capacity.

Besides O’Brien’s successor, another new staff member is present at the start of the season. Nanny West (Di Botcher, Stella) is charged with taking care of Mary’s son and Tom’s daughter. I won’t say you’ll like Nanny West, but I definitely found her subplot entertaining.

And Cousin Rose (Lily James) is now part of the central cast. She gets into trouble, of course, and as the young rebel in the house, will probably be a driving force behind story this season.

DOWNTON ABBEY is a memorable drama series that I look forward to. Judging by these first two hours, that won’t be changing anytime soon.