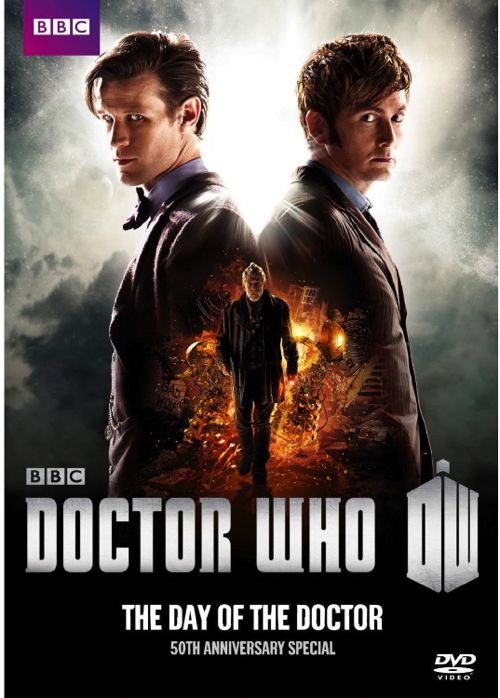 Seat42f and BBC Home Entertainment have teamed up to give THREE lucky winners a copy of DOCTOR WHO THE DAY OF THE DOCTOR on DVD. For a chance to win leave a comment below telling us why you want to add DOCTOR WHO THE DAY OF THE DOCTOR to your DVD collection. Only one entry per person. Contest ends December 17th. Winners will be notified on December 18th via email so make sure to use a valid email address when you post your comment.

Bonus features include:
•          Doctor Who Explained – The entire 50-year history in one 50-minute special
•          Two mini-episodes – “The Night of The Doctor” and “The Last Day”
•          Behind-the-scenes featurette – Go behind the scenes at the Doctor Who 50th Anniversary Special – on set and on location – featuring interviews with Matt Smith, Jenna Coleman, David Tennant, Billie Piper and John Hurt. Steven Moffat gives insight into writing the episode, and it takes a look at the monsters that make a return for this very special event
•          San Diego Comic-Con trailer of Doctor Who: The Day of The Doctor
•          Doctor Who 50th Anniversary tribute teaser trailer

Doctor Who earned the Guinness World Record for the largest ever simulcast of a TV drama following a massive global campaign which saw the episode broadcast in 94 countries across 6 continents. The anniversary special broke ratings records: BBC AMERICA was the #1 cable network on Twitter on November 23, Doctor Who was #1 on Twitter in all of television, and the series set a record on Tumblr with the highest level of activity of any televised event ever, surpassing the Super Bowl and MTV’s Video Music Awards. And in addition to a theatrical simulcast in 11 markets on November 23, BBC AMERICA and NCM Fathom Events presented Doctor Who: The Day of The Doctor in RealD™3D in over 660 select movie theaters across the country on November 25. Overall Doctor Who: The Day of The Doctor was No. 2 at the box office on November 25 and was Fathom’s most successful one-night event ever.

Doctor Who: The Day of The Doctor, written by lead writer and executive producer Steven Moffat, sees the Doctors (Matt Smith and David Tennant) embark on their greatest adventure across space and time. In 2013, something terrible is awakening in London’s National Gallery; in 1562, a murderous plot is afoot in Elizabethan England; and somewhere in space an ancient battle reaches its devastating conclusion. All of reality is at stake as the Doctor’s own dangerous past comes back to haunt him. Starring Matt Smith, David Tennant, Jenna Coleman, with Billie Piper and John Hurt, this is the event fans have been waiting for. The special also stars Jemma Redgrave as Kate Stewart, daughter of legendary Brigadier Lethbridge-Stewart, and Joanna Page as Queen Elizabeth I.

Last seen as the Tenth Doctor on January 1, 2010, the special is the first time David Tennant has reprised his role. During his tenure as the Time Lord, Tennant appeared in three seasons as well as several specials. He was first revealed as the Doctor in the 2005 season finale, The Parting of the Ways. Meanwhile Billie Piper, who played companion Rose Tyler for two seasons following the reboot in 2005, will appear in the show for the first time since featuring in David Tennant’s last episode, The End of Time in 2010. Doctor Who: The Day of The Doctor is directed by Nick Hurran, executive produced by Steven Moffat, Faith Penhale and produced by Marcus Wilson.