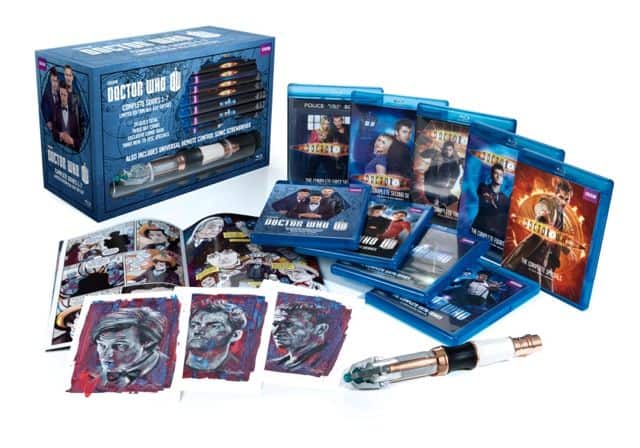 The only thing better than watching Doctor Who is watching it in high definition, which is why BBC Home Entertainment is celebrating Doctor Who’s 50th anniversary with the release of Doctor Who: The Complete Series 1-7 Limited Edition Blu-ray Gift Set on November 5, 2013. The set includes the complete adventures of the Ninth Doctor (Christopher Eccleston, Thor: The Dark World) and Tenth Doctor (David Tennant, Broadchurch, Fright Night), available in newly remastered Blu-ray versions at full 1080p resolution for the first time ever, sitting alongside those of the Eleventh Doctor (Matt Smith) in this high definition collection. The Home Entertainment team has gone above and beyond to bring fans the best possible experience, and have also fully remastered the complete Tenth Doctor Specials as well as The Complete Fifth and Sixth Series (previously available on Blu-ray), to full 1080p resolution as well. Throw in the new Doctor Who: The Complete Seventh Series Blu-ray set along with hours and hours of bonus features from the past collections PLUS 120 minutes of bonus material that has never previously been available on disc, as well as more goodies than you can shake a sonic screwdriver at, and this is one blue box that just might actually be bigger on the inside.
And speaking of sonic screwdrivers…

“Who looks at a screwdriver and thinks, ‘Ooh, this could be a little more sonic.’?”
–       Captain Jack Harkness

Any fan of Doctor Who will be glad to tell you that all screwdrivers could stand to be a bit more sonic. And that’s why we’ve included the original Doctor Who Universal Remote Control Sonic Screwdriver, a gesture-based remote control replica of the Eleventh Doctor’s trusty tool, in the Doctor Who: The Complete Series 1-7 Limited Edition Blu-ray Gift Set.  Crafted from real metals and featuring sound effects from the show, you can impress your friends when you turn on your television with a wave of your hand and feel like a Time Lord yourself.

With 29 blu-ray discs of episodes, specials and bonus features, plus the Universal Remote Control Sonic Screwdriver, 3 exclusive art cards and an exclusive comic book, this limited edition gift set will keep on giving for years to come.

·         “The Doctor Who Ultimate List of Lists” from BBC AMERICA’s The Brit List – BBC AMERICA’s pop culture correspondent, Asha Leo (@ashaleo), is joined by special guest John Barrowman (“Torchwood,” “Doctor Who”) to announce the rankings of the “Top Five Companions,” “Top Five Scariest Moments,” “Top Five Best Monsters,” “Top Five Guest Stars” and “Top Five Things You’ll Only See on Doctor Who.” Rankings are based on votes from readers of BBCAMERICA.com’s Anglophenia blog.
·         Doctor Who at the Proms 2010 – Doctor Who’s own Karen Gillen and Arthur Darvill host a spectacular evening of music from the series played live by the London Philharmonic Orchestra at London’s historic Royal Albert Hall.  Includes video projections, appearances by the monsters and a special guest appearance from 11th Doctor Matt Smith.  For the first time, the collection will include the full 90-minute concert and has been remastered in 5.1 Surround Sound.
·         Doctor Who: The Best of the Christmas Specials – This previously unreleased special from December 2011 takes an inside look at the very best moments from the incredible Doctor Who Christmas specials that have captivated audiences around the world. A collection of fans from the celebrity, comedy, sci-fi and digital worlds discuss their favorite moments from both David Tennant and Matt Smith era Christmas episodes.

Other additional items include: