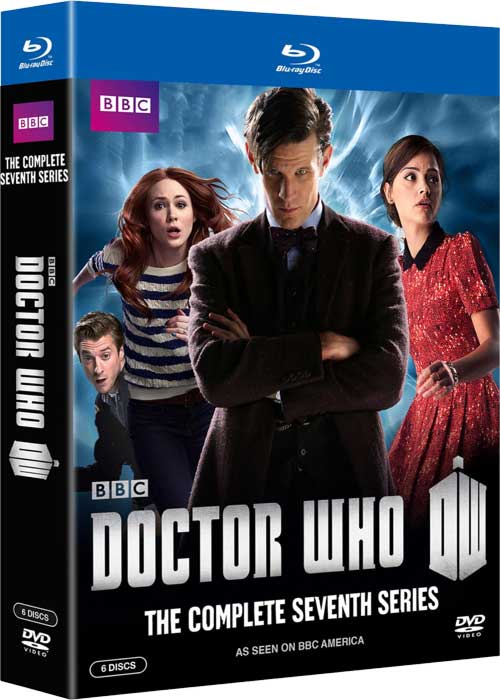 Seat42f and BBC Home Entertainment have teamed up to give THREE lucky winners a copy of DOCTOR WHO Season 7 on BLURAY. For a chance to win leave a comment below telling us why you want to add DOCTOR WHO Season 7 to your BLURAY collection. Only one entry per person. Contest ends October 8th. Winners will be notified on October 9th via email so make sure to use a valid email address when you post your comment.

DVD/BLURAY RELEASE DATE : September 24th, 2013
Matt Smith returns as the Eleventh Doctor in this collection of all thirteen blockbuster episodes from the seventh series, plus the 2011 and 2012 Christmas Specials. In the 2011 Doctor Who Christmas Special, The Doctor, The Widow and The Wardrobe, the Doctor proves that sometimes wishes really do come true when his mysterious gift leads Madge Arwell and her two children to a magical wintry wonderland. Then, in the first part of series seven, the Ponds (Karen Gillan and Arthur Darvill) make their final voyages with the Doctor – filled with dinosaurs, old foes, and the Weeping Angels. The 2012 Christmas special, The Snowmen, brings the Doctor a new friend (Jenna-Louise Coleman) in Victorian London – but has he already met her before? The final eight episodes of series seven see the Doctor and his new companion become trapped in a Russian submarine with a deadly passenger, chase terrifying ghosts, and come face to face with an army of upgraded Cybermen, while the Doctor’s oldest secret threatens to be revealed. With a cliff-hanger ending that will leave fans breathless, don’t miss the chance to catch up on Doctor Who: The Complete Seventh Series in preparation for the 50th Anniversary Special on November 23. Bonus features include audio commentaries, behind-the-scenes features, episode prequels, Doctor Who on The Nerdist, Doctor Who at Comic Con, and the BBC AMERICA specials The Companions and Doctor Who in the US.
TwitterFacebookPinterestEmail