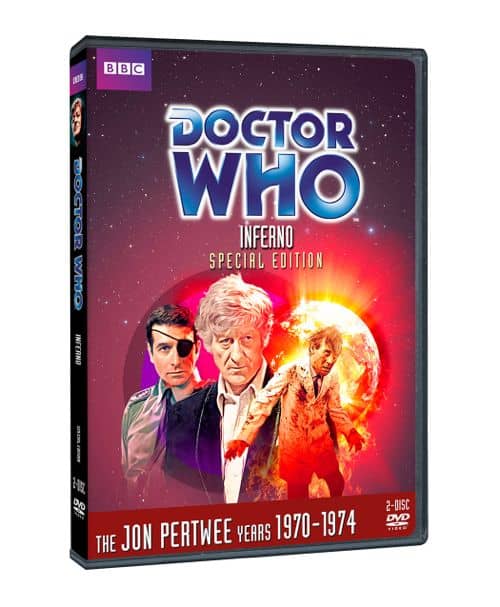 Seat42f and BBC Home Entertainment have teamed up to give THREE lucky winners a copy of DOCTOR WHO: INFERNO SPECIAL EDITION on DVD. For a chance to win leave a comment below telling us why you want to add DOCTOR WHO: INFERNO SPECIAL EDITION to your DVD collection. Only one entry per person. Contest ends June 20th. Winners will be notified on June 21st via email so make sure to use a valid email address when you post your comment.

Inferno is a top-secret project that involves drilling down into the crust of the Earth to unleash a new energy source. However, the Doctor (Third Doctor – Jon Pertwee), along with his assistant Liz Shaw, is concerned that this drilling will have disastrous consequences for the whole world. His concerns are soon confirmed when the TARDIS throws him into a dangerous parallel universe, where Project Inferno is almost complete and the end of the world is near. This digitally re-mastered edition of the Doctor Who classic includes Audio Commentary with actors Nicholas Courtney and John Levene, producer Barry Letts. and script editor Terrance Dicks; “Can You Hear The Earth Scream?” making-of featurette; Pertwee Years Intro; Deleted Scene; Photo Gallery;  and more.