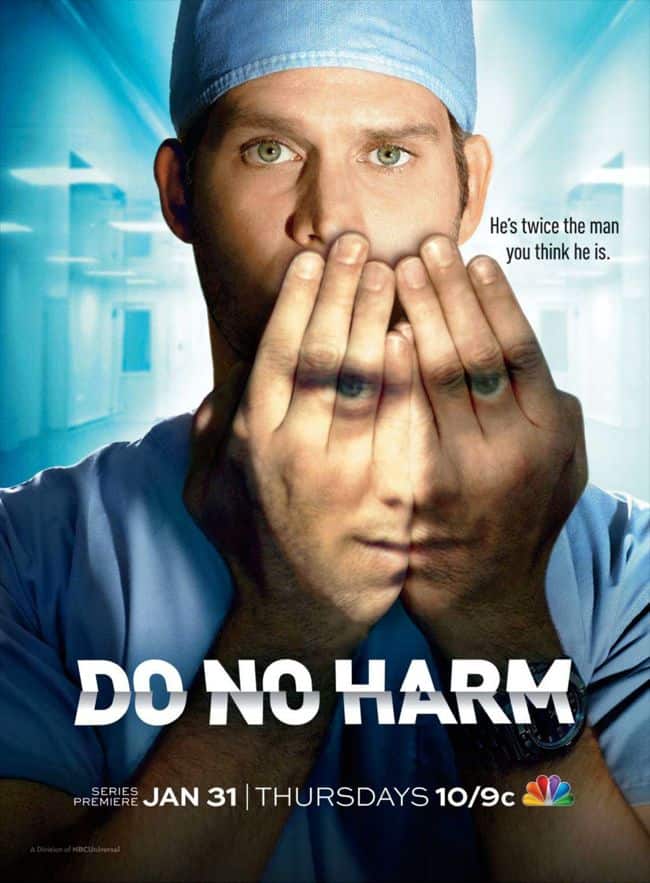 NBC’s DO NO HARM premieres this Thursday at 10 p.m. ET. It’s a Jekyl and Hyde story about a doctor who turns into a psychopath for twelve hours every day. The medical aspect is played up, with much of the drama set in the hospital, making DO NO HARM a hybrid between a classic good vs. evil tale and a case of the week procedural.

In some ways, DO NO HARM reminds me of Awake, which was canceled after a single season. Both have two distinct realms, but the big difference in DO NO HARM is, instead of the other characters changing around the protagonist, the protagonist changes in the midst of everyone else. But they both dwell in mythology and mystery, to make the series just a little better than the standard network flare.

Does this signal the end of the straight cop or doctor show? We have so many flooding the air waves that any new show needs a gimmick to get attention. In the case of DO HARM, the hook is the personality shifts of the lead. This could be the future of the genre, using the tried and true formula that has worked for so many other shows, but including a little extra to trick the critics and discerning who would write off such a procedural without a second thought into sticking around.

In the pilot of DO NO HARM, Doctor Jason Cole (Steven Pasquale, Rescue Me) treats a man who has a cluster of blood vessels in his head. It’s a tricky surgery, one Cole has not performed before, but he soars through it, giving the man his life back. Cheesy goop, the same kind of story you’d see on any other medical procedural. This is the part of the episode we do not need.

What’s much more enticing is that Jason turns into a man named Ian (also Pasquale) at night, and since Jason has been using drugs to repress Ian for five years, Ian isn’t too happy. Now that Ian has built up a resistance to the regimen, he is bent on revenge. This could be a disaster for the surgeon, except that Jason is smart enough to put safeguards in place to keep Ian from actually performing surgery. For now, anyway, until Ian figures out a way around them.

There is a second villain in the form of Jason’s co-worker, Doctor Kenneth Jordan (Michael Esper, A Beautiful Mind). Jordan isn’t much of a threat, at least not yet, since he’s clueless about Jason’s condition. But we don’t need Jordan to be all that bad, since Ian is the real antagonist of the series.

Now, a big leap of faith has to be taken in that Jason is the head of a surgical department at what looks to be a major hospital. His boss, Dr. Vanessa Young (Phylicia Rashad, The Cosby Show), is extremely understanding of his unspecified medical condition, which does not allow him to work at night. But considering what long hours surgeons work during their training, it’s odd that he would reach such a level, especially at such a young age, without being able to fully commit to his job. And as a doctor herself, shouldn’t Vanessa have more questions? She clearly doesn’t know the extent of Jason’s struggle, and I find that very odd.

We also have to believe that Jason has a buddy named Dr. Ruben Marcado (Lin-Manuel Miranda), who not only just happens to be a brilliant researcher, but who is willing to continuously risk his career, using the hospital’s resources to try to find ways to control or cure Jason of Ian. I’m sure that the writers can spin a backstory that justifies the relationship between Jason and Ruben, but explaining how he does all of this work for Jason and still keeps his job will require quite a bit of a stretch.

That’s the issue with DO NO HARM: it stretches reality too much. I really love the interplay between Jason and Ian, the struggle for control over each one’s own life, and how the actor handles both parts, but some things don’t make sense.

For instance, Jason is apparently a very bad liar; at least, that’s what we’re told during his interactions with Dr. Lena Solis (Alana De La Garza, Law & Order), the obligatory love interest. Yet, he lies all day, every day in his normal life, to almost everyone, and even thinks he can lie to Ian in video form. How does that work? Is he a bad liar or isn’t he?

I did think it was interesting that this pilot begins with Jason’s flirtations with Lena, and then reveals a history that includes an ex, Olivia Flynn (Ruta Gedmintas, The Borgias), whom Ian is still obsessed with, and who has been keeping a secret from both men. Olivia seems like the sort of plot that would begin in season one, and then be revisited later, with Lena introduced much later in the series. To enter at this point is a choice I find intriguing, though not unlike what ABC’s Scandal is currently doing.

I enjoyed this episode for the most part. I like the premise, and the cast, which includes John Carroll Lynch (Body of Proof) as Jason’s confidant and Samm Levine (Freaks and Geeks) as Jason’s competent assistant, is great. Yet, the nagging plots holes did infringe on my enjoyment. Plenty of good shows start with some uneven storytelling and work it out, which is what I hope will happen here.

One last complaint. While the image of Jason writing Do No Harm in a foggy mirror, and Ian erasing the message, works great for promos, it feels completely ridiculous in the episode. This should not have been included.