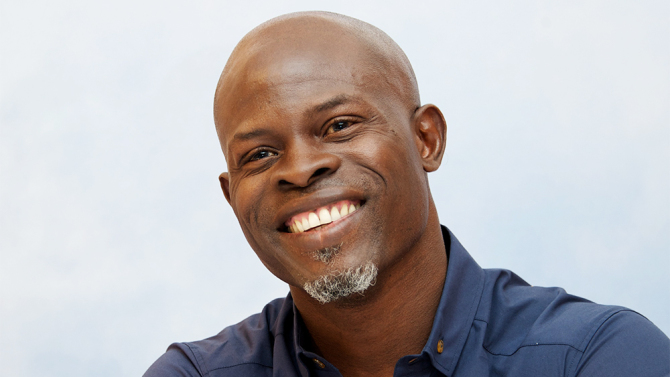 Two-time Academy Award nominee Djimon Hounsou (“Blood Diamond,” “In America”) has been cast as a series regular on WAYWARD PINES, the hit psychological thriller event series returning for a second season this summer on FOX. Hounsou will portray CJ MITCHUM, an original resident of Wayward Pines and a historian for the town with extensive knowledge of its complex origins, and the one person who can provide a unique bridge between the current world of Wayward Pines and the previous world that humans inhabited. Hounsou joins Jason Patric, who was previously announced in a starring role on Season Two of WAYWARD PINES.

From executive producer M. Night Shyamalan (“The Sixth Sense,” “The Visit”) and based on the world created by author Blake Crouch in his international best-selling series of books, the 10-episode, second season will pick up after the shocking events of Season One, with the residents of Wayward Pines battling against the iron-fisted rule of the First Generation. As events unfold in Wayward Pines, the thoughtful and philosophical Mitchum – a former teacher – makes a decision that will affect the fate of Wayward Pines and every resident living there.

Djimon Hounsou has been nominated for two Academy Awards for his roles in director Ed Zwick’s “Blood Diamond” and director Jim Sheridan’s “In America.” He also is well known for his breakthrough performance as “Cinque,” the African who leads an uprising to regain his freedom in Steven Spielberg’s “Amistad.” Hounsou earned a Golden Globe Award nomination and a NAACP Image Award for the part. He later shared a SAG Award nomination as a member of the cast of Ridley Scott’s Academy Award-winning Best Picture “Gladiator.” Recent film credits include “Fast & Furious 7,” “Guardians of the Galaxy” and “How to Train Your Dragon 2.” Hounsou next co-stars as “Chief Mbenga” in the upcoming feature film “Tarzan,” set for release this summer, and director Guy Ritchie’s “Knights of the Roundtable: King Arthur.” Hounsou’s forthcoming movie credits also include “Same Kind of Different as Me,” with Greg Kinnear, Jon Voight and Renee Zellweger. He most recently finished work on the documentary “In Search of Voodoo: Roots to Heaven.” On television, Hounsou voiced the “Black Panther” in the animated cable series based on the Marvel comic of the same name. He also starred as a refugee who sought asylum in a memorable six-episode arc on “ER,” and played a recurring role on “Alias,” starring Jennifer Garner. Born in Benin, West Africa, Hounsou moved to Paris at the age of 13, and was later discovered by fashion designer Thierry Mugler. He subsequently modeled for and appeared in several iconic music videos for legendary photographer Herb Ritts and director David Fincher.

WAYWARD PINES is a production of 20th Century Fox Television. The series is executive-produced by Donald De Line (“Green Lantern,” “The Italian Job”), Ashwin Rajan (“Devil,” “The Visit”), Blake Crouch and M. Night Shyamalan. Mark Friedman (“Believe,” “The Forgotten”) also serves as executive producer and showrunner. “Like” WAYWARD PINES on Facebook at facebook.com/WaywardPines. Follow the series on Twitter at @WaywardPinesFOX and join the discussion using #WaywardPines. See photos and videos on Instagram by following @Wayward Pines.