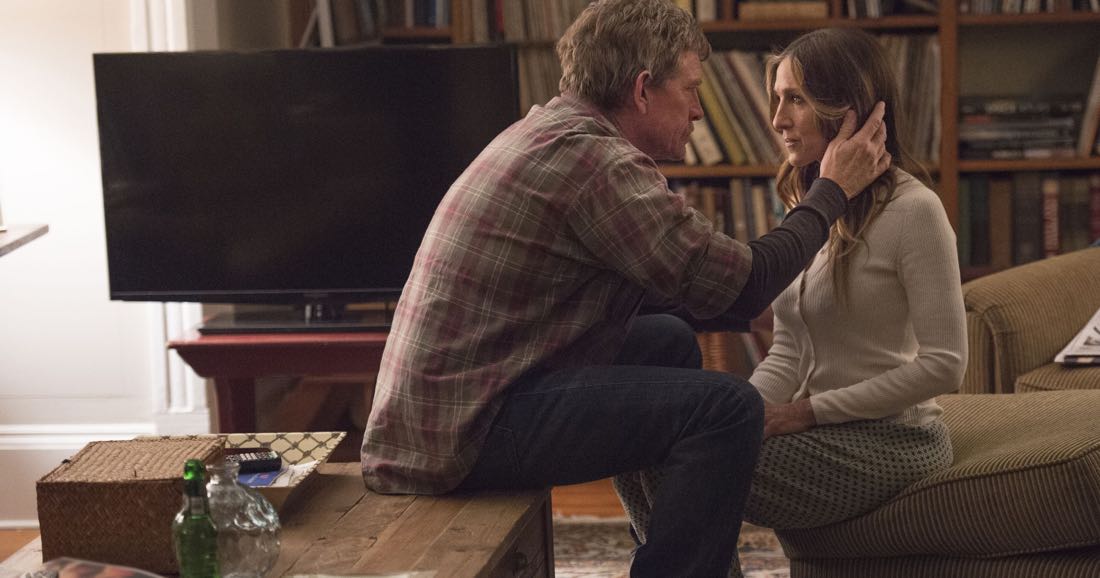 DIVORCE is coming to HBO. This dark ‘comedy’ created by Sharon Horgan (Catastrophe) is about a long-married couple with a pair of kids who realize that their relationship just isn’t working any more. As they try to disentangle themselves, they find no shortage of complications and complicated feelings, the idea of dissolution a lot prettier than the reality of it. But, presumably, they’ll have plenty of time to figure it out, assuming the show runs for a few seasons.

At the center of DIVORCE is our couple, Frances (Sarah Jessica Parker, Sex and the City) and Robert (Thomas Haden Church, Wings). They aren’t as screwed up as their friends, the violent Diane (Molly Shannon, Saturday Night Live), her cruel spouse Nick (Tracy Letts, Homeland), or the sad single Dallas (Talia Balsam, Mad Men). But they are dissatisfied enough to engage in infidelity and lack of communication, which culminates in the pilot in a decision to go their separate ways. If only it were that easy or quick, the choice one they will have to make repeatedly before they can fully get out.

One may be forgiven for thinking that Sarah Jessica Parker’s return to HBO is simply a portrayal of the next evolution of her Sex and the City character. After all, Carrie Bradshaw was neurotic and annoying, never sure what she wanted, and self-sabotaging. That SJP made the character likeable anyway is a testament to the fully fleshed out being that she created, because on paper it’s hard to sympathize with Carrie, and it’s very possible Carrie and her end-game beau, John, a.k.a. Mr. Big, headed down a similar path as Frances and Robert sometime in their future.

Yet, DIVORCE isn’t a treated as a continuation. Part of that is the much more melancholy friends surrounding Frances, and part of it is the utter lack of cheeriness that pervades the series. At Carrie’s lowest, one knew she would pick herself back up. Frances doesn’t have the same guaranteed rebound, definitely in a tailspin that will take awhile to work itself out, if it ever does. There’s no happy ending or even happy middle on the horizon in this show.

To some, that might be a turn off, and I’d understand that. But HBO viewers are probably, on the whole, a little more discerning, in search of the higher quality programming that makes them think and feel and surprises them, not just a joyous formula. So I think it has a shot at finding its audience.

DIVORCE is good. Not surprisingly so, just as good as expected. It gives a realistic portrayal of something society usually shies away from delving too deeply into. It does so by painting a portrait of a couple that is at once both authentic and dramatic. Neither of the duo are one thing, building years of unseen backstory and emotional history into every conversation, every word chosen. There is a bond here that is formed in a thousand ways over the years, and each of them show in every line of dialogue.

I think Frances sees herself as both a very average, normal person who anyone could understand, and as a victim of a situation she isn’t completely sure what she wants to do with. It’s egotistical, but not any more so than most people, and the contradictions are of the most natural variety. SJP isn’t one of my favorite actresses, but she can do amazing things with the right parts, and this is one of them for her.

At the same time, THC perfectly balances her and brings so much more to the table with Robert than a blank slate for Frances to play off of. He is just as important, even if he’s not as in focus, and the combination is a winning one.