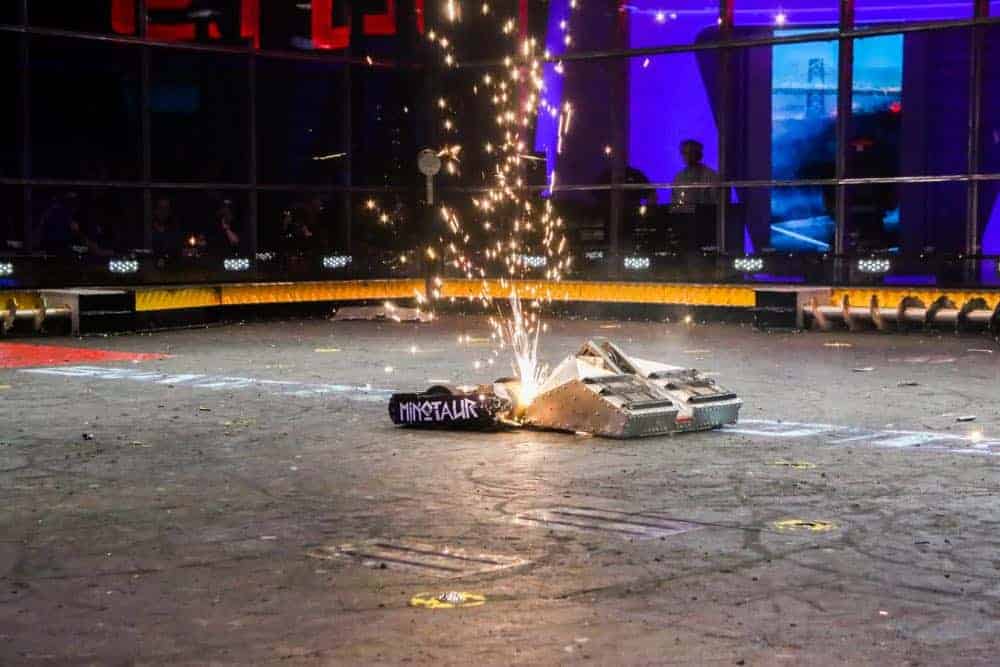 The epic robot-fighting series BattleBots is making its triumphant return with all-new episodes set to premiere Friday, May 11 at 8 PM ET/PT on Discovery Channel and Wednesday, May 16 at 9 PM on Science Channel.

BattleBots features the biggest, baddest, strongest, and fastest next-generation robots from all over the world as they duke it out for supremacy in the rapidly exploding world of Robot Combat Sports. Chris Rose and Kenny Florian return to call all the action, while Jessica Chobot serves as the sideline reporter. Faruq Tauheed is back as the ring announcer.

The metal munching mayhem is back, from the bots to the builders, the flames, the spark and all the robot guts and glory. Each match consists of two robots competing in a single, three-minute bout in which the goal is to destroy or disable their opponent. If there is no knockout during the battle, a panel of judges will declare a victor. Some of the returning favorites this season include Tombstone, Minotaur, Chomp, Witch Doctor, Bronco, Bombshell, Bite Force, Yeti, and more.

BattleBots highlights the design and build of each robot, bot builder backstories, and their pursuit of the BattleBots championship. Homemade robots built on a myriad of platforms and featuring a huge variety of deadly weapons go head-to-head, all captured by state-of-the-art onboard technology and cameras to enhance viewing and provide combat analytics.

Discovery Channel is dedicated to creating the highest quality non-fiction content that informs and entertains its consumers about the world in all its wonder, diversity and amazement. The network, which is distributed to 100.8 million U.S. homes, can be seen in 224 countries and territories, offering a signature mix of compelling, high-end production values and vivid cinematography across genres including, science and technology, exploration, adventure, history and in-depth, behind-the-scenes glimpses at the people, places and organizations that shape and share our world. For more information, please visit www.discovery.com

Science Channel, a multi-media business unit of Discovery Communications, is the home of all things science around the clock, including series such as MYTHBUSTERS, OUTRAGEOUS ACTS OF SCIENCE, WHAT ON EARTH?,  HOW THE UNIVERSE WORKS, UNEARTHED, and HOW IT’S MADE. Science Channel’s programming also included timely, expert-driven specials covering breaking science news and discoveries. Science Channel is the premiere TV, digital and social community for those with a passion for science, space, technology, archeology, and engineering, providing immersive, engaging, high-quality entertainment across all Science Channel assets including: Science Channel television network, available in more than 72 million homes in the U.S; complimentary Video On Demand offering; SCI Go app allowing viewers to catch up on full episodes of their favorite shows anytime; deep video, interactive storytelling and virtual reality at www.sciencechannel.com; and conversations on Science Channel’s popular social platforms including Facebook, Twitter, Instagram and Snapchat via @ScienceChannel.