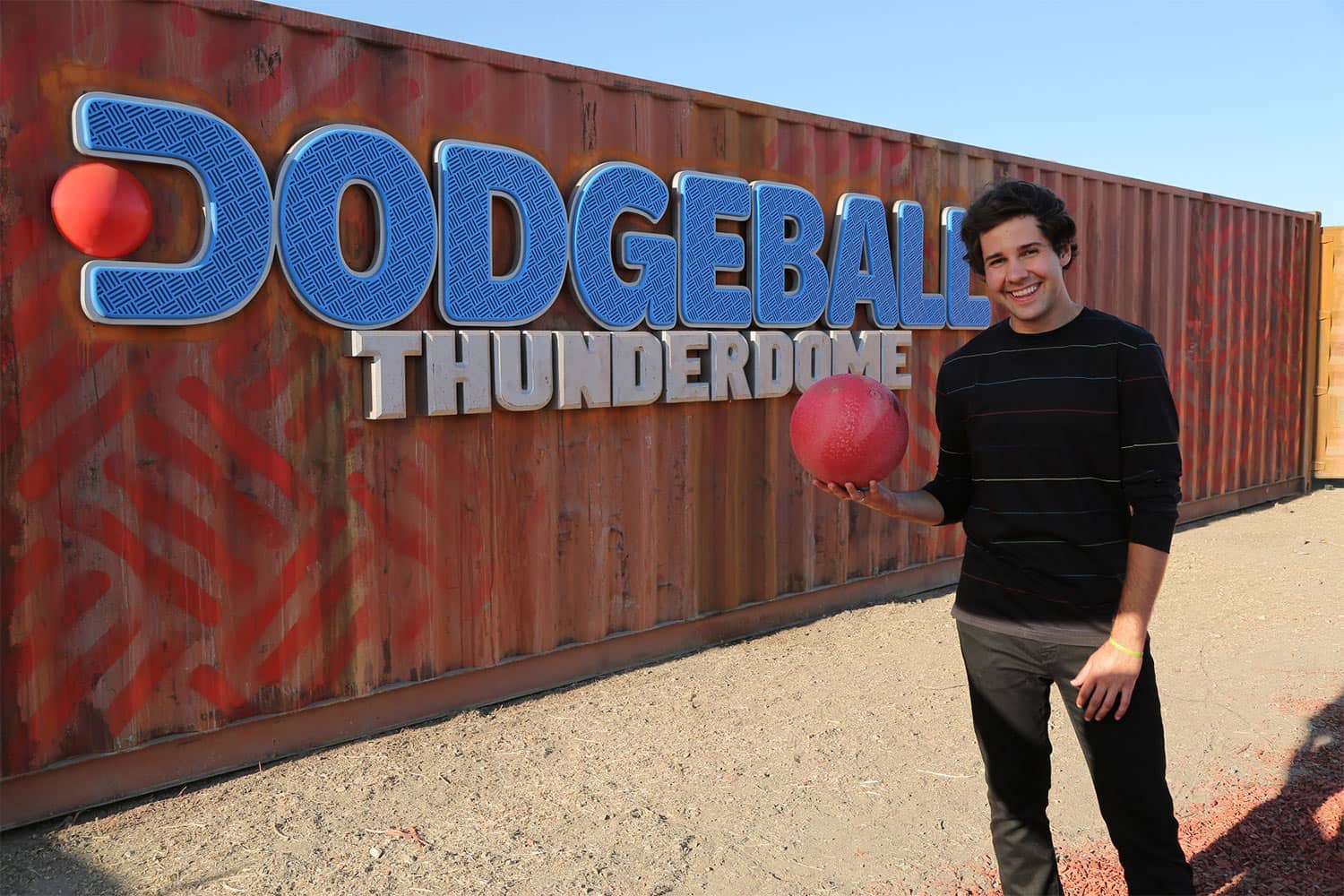 For generations, dodgeball was a game of either fun or fear depending on where you stood in the middle school pecking order. Discovery takes on dodgeball in a way only Discovery can, transforming the game into an epic sporting adventure in all-new arena where everyday people become heroes. On an isolated 13.8-acre specially constructed site, Discovery’s Dodgeball is reimagined as DODGEBALL THUNDERDOME where winners are not determined simply by their strength and the losers aren’t always picked last. Here, contestants have a chance to claim glory in extraordinary challenges where strength matters but so does strategy, quick thinking, and the willingness to leave everything on the field. This summer, pop culture phenom David Dobrik hosts this all-new competition series along with co-hosts Erin Lim and Andrew Hawkins, taking dodgeball from the middle school gymnasium to the Thunderdome. DODGEBALL THUNDERDOME premieres on Discovery Wednesday, August 19 at 9 PM ET/PT. The series is produced by Pilgrim Media Group, a Lionsgate company.

The pool of adult competitors are ready to hit the playing field not just for the glory, but for redemption from the days of being picked last. Competitors range from professional athletes to those who’ve never played a sport in their life. But they all have one thing in common – a drive to win.

It all culminates with a special 9th episode – a tournament of champions that brings back all of the winners from the previous 8 episodes who will then compete for a $25,000 cash prize.

“I’m super excited to be working with Discovery on Dodgeball Thunderdome. Dodgeball was always everyone’s favorite game in gym class and hosting this show brings back many sweaty memories of dominating in Vernon Hills,” said Dobrik.

“Fun is at the heart of this show and now more than ever is the time for totally relatable, laugh out loud viewing experiences for the entire family. The competition is hilariously driven by Dobrik’s infectious energy, Lim’s strong on-camera presentation, and Hawkins’ expert play-by-play skills,” said Scott Lewers, EVP Multiplatform Programming, Factual and Head of Content, Science at Discovery. “We are thrilled to partner with Pilgrim Media Group to present a series that truly captures the spirit of dodgeball speaking to a whole new generation of Discovery viewers.”

Fans of David’s are familiar with his over the top giveaways and in true David Dobrik fashion, DODGEBALL THUNDERDOME viewers will be able to get in on the action. By tuning in and looking out for each episode’s special code, the Discovery audience will be able to enter for chance to win $5,000 cash every episode this season.

David Dobrik is a digital star and TV personality known for making viral content on YouTube. With over 60 million followers across his platforms, David has mastered the art of quick-cut content. Named “Gen Z’s Jimmy Fallon” by the Wall Street Journal, David exhibits his characteristic charm and undeniable relatability in everything he does. With his widely popular social media presence and podcast, VIEWS, David has elevated himself into international stardom. David starred alongside co-judges Ciara and Debbie Gibson in Nickelodeon’s series America’s Most Musical Family in 2019, hosted the Teen Choice Awards and presented at the American Music Awards. David is represented by WME, Millennial Entertainment and Metro PR.

Erin Lim serves as DODGEBALL THUNDERDOME co-host. Erin is the Host of “E!’s The Rundown” – one of the first fully produced weekly shows for Snapchat which garners millions of viewers per week and has won multiple awards including a Digiday and a Shorty Award. Lim is also the host of “BingE! Club” on Snapchat and a contributing correspondent for “E! News.” In 2017 and 2018, Erin’s on-air work helped “E! News” earn a Daytime Emmy Award nomination for Outstanding Entertainment News Program. Erin and the E! News team continue to reinvent entertainment and celebrity news for the next generation, serving as the go-to multiplatform destination for content and pop culture coverage spanning fashion, beauty, lifestyle, viral content, television, music and more, and the voice for what’s trending in pop culture across all platforms – from television and online to mobile, social and VOD.

About Discovery Channel
Discovery Channel is dedicated to creating the highest quality non-fiction content that informs and entertains its consumers about the world in all its wonder, diversity and amazement. The network, which is distributed to 88.3 million U.S. homes, can be seen in 224 countries and territories, offering a signature mix of compelling, high-end production values and vivid cinematography across genres including, science and technology, exploration, adventure, history and in-depth, behind-the-scenes glimpses at the people, places and organizations that shape and share our world. For more information, please visit www.discovery.com.