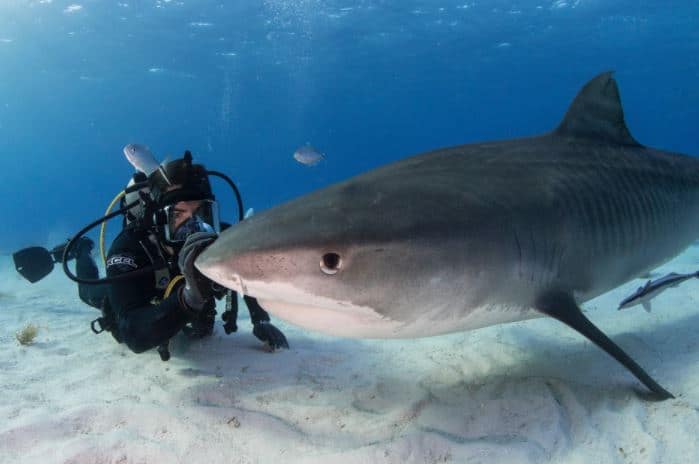 discovery+, the definitive non-fiction, real-life subscription streaming service, announced today the launch of the powerful and timely documentary written, directed and executive produced by acclaimed filmmaker Eli Roth, FIN, on Tuesday, July 13, 2021. The film is produced by Lionsgate and its Pilgrim Media Group company in association with Leonardo DiCaprio’s Appian Away productions.

In FIN, Roth and a professional group of scientists, researchers and activists sail around the globe to unveil the truth behind the death of millions of sharks, exposing the criminal enterprise that is impacting the extinction of the misunderstood creatures. FIN features work from photographer Michael Muller and the support of organizations such as Oceana, Sea Shepherd, and Wild Aid. Oscar® winner Leonardo DiCaprio executive produces the film along with actor, producer and shark activist Nina Dobrev and President of Lionsgate Nonfiction Television and Pilgrim CEO and Chair Craig Piligian.

“FIN is the scariest film I’ve ever made, and certainly the most dangerous, but I wanted to send a message of hope to end this needless massacre of sharks. They keep our oceans clean to produce half our oxygen, and they deserve our respect and deserve to be saved, especially now when the shark fin sales ban is going before the House,” said Roth. “It’s an honor to be joined by Leonardo DiCaprio to bring it to discovery+ audiences, and I couldn’t have done this film without the incredible support of Lionsgate and the amazing team at Pilgrim. I wanted to show the crisis from all sides and paired with an action campaign we can make the change necessary to protect them. Fifty years ago the world came together to save the whales, then we did it for dolphins, and recently for Orcas. It’s time to do the same for sharks, and time is running out.”

“Discovery is the undisputed leader in shark programming and we will extend that expertise into the streaming space this summer on discovery+, with must-see content for shark lovers and enthusiasts. Perhaps no project is more important and timely than FIN, as we bring awareness to the serious threats these beautiful fish are facing,” said Lisa Holme, Group SVP of Content and Commercial Strategy for Discovery, Inc. “Eli Roth put together a remarkable film with support from Leonardo DiCaprio and Nina Dobrev, and we are honored to share it with the world.”

“Working with Eli and the group of experts on this documentary has been mind-blowing and immensely educational. For years, we’ve perceived sharks as monsters but what’s truly monstrous is what’s happening to these beautiful creatures,” said Piligian. “Eli’s care, hard work and research on this important cause is evident in the remarkable production value of the film and its riveting effect. It’s a passion project for all of us involved and discovery+ is the perfect home.”

FIN will begin streaming globally on Tuesday, July 13 exclusively on discovery+ as part of the company’s celebrated Shark Week. This year, the longest running summer series event, includes more hours of programming across Discovery and discovery+ than ever before. In addition to watching the film on discovery+, viewers can join the conversation on social media with #theFinmovie and follow discovery+ on Facebook, Twitter, Instagram, and TikTok for more updates.

Combining the STARZ premium global subscription platform with world-class motion picture and television studio operations, Lionsgate (NYSE: LGF.A, LGF.B) brings a unique and varied portfolio of entertainment to consumers around the world. Its film, television, subscription and location-based entertainment businesses are backed by a 17,000-title library and the largest collection of film and television franchises in the independent media space. A digital age company driven by its entrepreneurial culture and commitment to innovation, the Lionsgate brand is synonymous with bold, original, relatable entertainment for the audiences it serves worldwide.