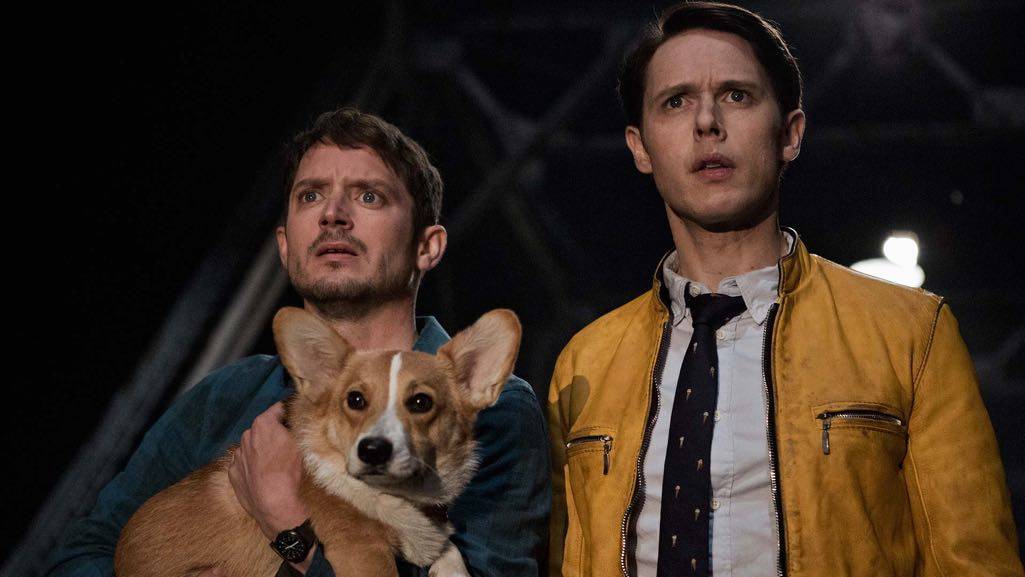 BBC America has a new series coming this weekend entitled DIRK GENTLY’S HOLISTIC DETECTIVE AGENCY. No, this isn’t the first show to be adapted from the Douglas Adams books, but it certainly is an interesting one.

If you haven’t read the Dirk Gently books, one that shares a title with this show, a second called The Long Dark Tea-Time of the Soul, and a third that was only partially finished before the author’s passing, but was posthumously published anyway, called The Salmon of Doubt, you may be asking yourself what exactly is a holistic detective? Or, after seeing the names of the other books in the series, you may have already chalked up the author as a weirdo whose titles aren’t expected to strictly make sense. Both are probably correct attitudes to have.

According to Dirk (played here by Penny Dreadful’s Samuel Barnett), a holistic detective is one who looks at the whole picture. He follows any tangent that occurs to him, and it somehow all works out. The universe provides, so to speak. And for some reason, he can be hired to solve a murder by the guy who is killed. (Don’t ask.)

Thankfully (for obvious reasons), Dirk is not our protagonist. That honor belongs to Todd (Elijah Wood, Wilfred, The Lord of the Rings), a simple hotel worker who gets pulled into Dirk’s craziness quite unintentionally. Todd is our everyman who doesn’t understand why very, very strange things start happening around him, and doesn’t want anything to do with a man who just moves into one’s Seattle apartment without asking. So he’s our grounded anchor in a very bizarre show.

Although I have not read this book series, it does not appear that the new show is based on the novels, plot-wise. Todd isn’t mentioned in any novel description. Instead, it just takes the inane character of Dirk and drops him into our real world, with all new wackiness. Considering how The Hitchhiker’s Galaxy movie was received, perhaps that’s for the best, though I would likely be annoyed if I were someone who had read the books.

The show itself does a lot of the trademark Adams wit (I did read and enjoyed all of Hitchhiker’s, so I feel I can say that), with a bunch of mumbo jumbo dialogue that sounds good, but doesn’t really hold up under scrutiny, in a good way. Some of the laughs are obtained by pointing out absurdity in the real world in the context of the insane Dirk, and some are just derived from weird situations.

It also resembles humorist Dave Barry’s wonderful debut novel, Big Trouble, in that it features a great many characters, each with their own motivations, who somehow all come into one another’s orbit. In the pilot, we meet Todd’s sister, Amanda (Hannah Marks, Necessary Roughness), who is struggling with an odd affliction. We also meet a holistic assassin, Bart Curlish (Fiona Dourif, True Blood), and Todd’s neighbor, Farah Black (Jade Eshete, Shades of Blue), and a scared nerd, Ken (Mpho Koaho, Falling Skies), and a weird man, Gordon (Aaron Douglas, Battlestar Galactica), and Zimmerfield (Richard Schiff, The West Wing), and Riggins (Miguel Sandoval, Medium), and Friedkin (Dustin Milligan, Schitt’s Creek), and Estevez (Neil Brown Jr., Straight Out of Compton), and The Rowdy 3, who are actually four men, which I won’t list because this is getting ridiculously long.

All of the above are zany main characters, and their individual threads are all already coming into conflict already in episode one. It’s an extremely convoluted plot that is surprisingly easy to follow, and constantly entertaining. There was not a moment of this pilot that I didn’t love, and while I have absolutely no idea where this is going, or really, even who Dirk is, I am eager to follow along.

If you like offbeat British humor in general, or Douglas Adams in particular, I recommend checking out DIRK GENTLY’S HOLISITC DETECTIVE AGENCY, premiering Saturday at 9/8 c on BBC America.