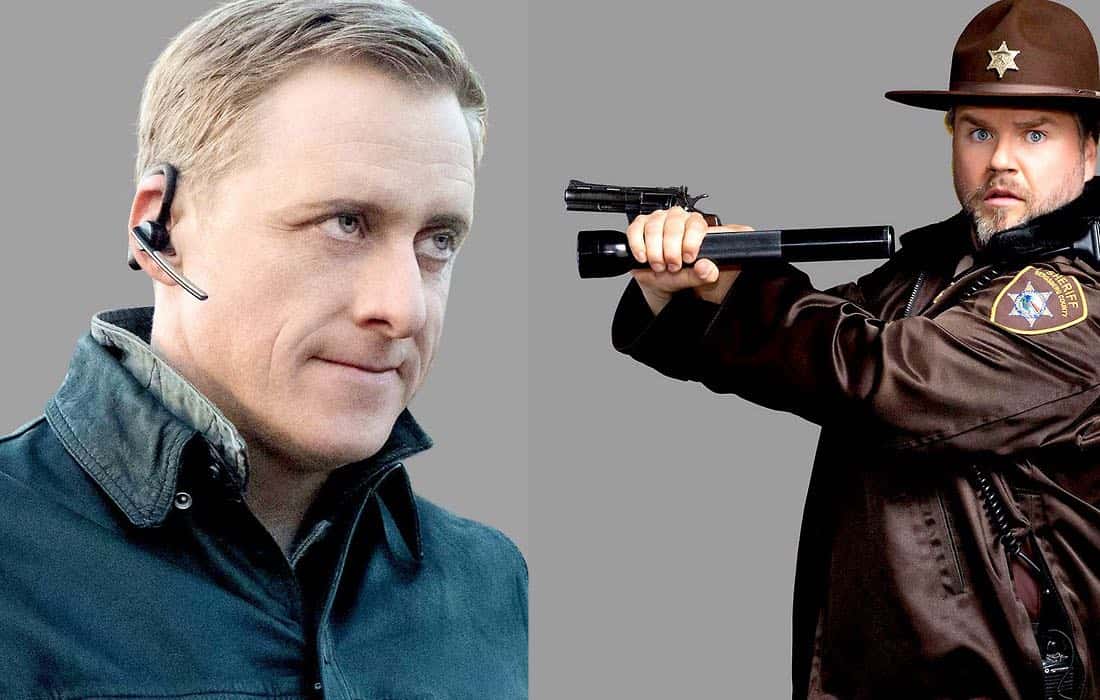 While attending last summer’s San Diego Comic-Con the cast of DIRK GENTLY HOLISTIC DETECTIVE AGENCY was in attendance to preview Season 2 and the continuing wacky, outrageous adventures through the twisted timelines. Here is what was gleaned from the interview with stars Tyler Labine and Alan Tudyk:

You balance each other, so wonderfully. Did you plan this onscreen reunion?

TYLER: No. Unfortunately, not. When we signed on to do the show, I found out after I had signed on that Alan was doing it. I was like, “Oh, that’s amazing. They must have something similar planned,” because the world revolves around Tucker and Dale, obviously. But it really doesn’t. I thought that there must be some internal knowledge that that would be cool to have him and I in the show together, and there might be little nod to Tucker and Dale, but there isn’t, which is pretty cool, in a way, actually, when you think about it.

What can you say about your characters and how they interact?

ALAN: We’re like those lovers you want to get together, but they don’t live in the same city.

TYLER: It’s a tease. We’re Jim and Pam, right? Are they or aren’t they? But we don’t. We’re not aware of our romance. My character is Sherlock Hobbs. I, basically, am the Sheriff of this fictitious town, which is where this season’s whole story takes place. It’s a very small town that nothing ever happens in, and this gang wonders into my life. I should probably just lock them away forever, if I was a smarter man, but I don’t, and I enable them in all the worst ways, and I go along with them, inexplicably, on this crazy ride, and I just accept everything that they tell me about time travel and alternate universes as fact. In fact, my character’s like, “Good. It’s about time something happened to me. I’m the Sheriff of this dang town, and no one ever asks anything of me.” So, he’s pretty excited. They’re the coolest thing he’s ever seen, and he’s so overzealous and eager to go along.

Did you guys watch this show before you got cast on it?

TYLER: Yeah. I was aware of the show, because when they first were casting Season 1, they approached me about the role of Todd, briefly. Nothing ever happened, obviously, but I was like, “That’s cool.” When I came out, I watched it and I was like, “Really cool, man.”

If you did watch the show, do you have any theories that you had come with on your own about where you characters stories fit in?

ALAN: I’ve been trying to guess at Matt Landis’ logic behind it, which there is, because there is truly a connectiveness, and a through-line, but reading a script for next episode is always surprising to me. There’s always some piece of the thing that I have to go, “What’s that? Oh, that’s that. Oh, good. Okay.” Or it has to be, “Well, in two episodes, this pays off here.”

Where does Mr. Priest come into this world?

ALAN: I come in in one of the early episodes. I’m brought in to track these people down, and then be brought to justice, of sorts. I work for Black Wing. I definitely don’t report to any government. If I do, I’m rogue as hell. It might be government. (Laughs) I don’t know.

TYLER: I don’t think so.

ALAN: I don’t think so. But he’s meant to be a bad-ass. Let’s just go with that. I’m a bad-ass in this. I have great guns. I have two good weapons. I have great tracking skills, and I’m on the case. I’m on their tail from the very beginning. That’s what I’m doing the whole season, finding them, with a plan to bring them in.

Do you get to use your humor, or is this role played pretty straight?

ALAN: He’s pretty funny, just because he’s a patent killer. He wants to kill people, and he has no problems saying, “Look. I’m going to kill. Just so you know, a lot of civilians are probably going to die today.” They’re like, “No. Don’t do that.” “That’s why I’m telling you, now, so you can prepare yourself for that.” Anything that stands in his way from capturing these guys.

To see how Tyler and Alan’s new characters are introduced into the already crazy storylines, be sure to tune in for the Season 2 premiere of DIRK GENTLY HOLISTIC DETECTIVE AGENCY on Saturday, October 14th at 9:00 p.m. on BBC America.