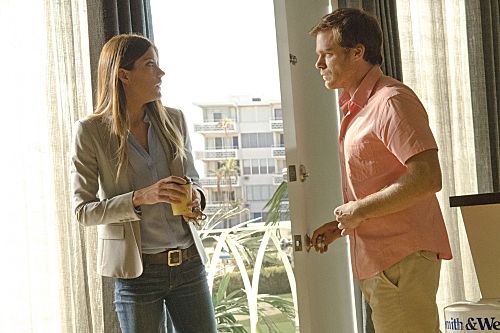 DEXTER is back for another round of murder and mayhem on Showtime. Last season ended with Dexter’s sister, Deb (Jennifer Carpenter), catching him in the act of killing a killer. This year’s premiere, “Are You…?,” picks up right in that same moment. Dexter (Michael C. Hall) struggles to explain to Deb what she is seeing. No matter how good a liar he may be, it’s awfully hard to justify the plastic wrap and a roll of knives when Deb is staring right at them. And she’s certainly no slouch in the detective department.

Much of Deb’s story in “Are You…?” is digesting her discovery. As one might expect, this is not something she can easily just accept. Deb loves Dexter, so the decision on how to act is complicated by a lot of feelings. But before she can even decide what she should do, she first has to come to grips with the fact that her brother is a monster. This is not something done quickly.

Deb has come awfully close to catching Dexter before, numerous times. Long before now, it’s seemed a certainty that she would find out her brother’s dark secret. Now that the time has come, DEXTER faces a tipping point. Deb can’t possibly un-see what she saw. So she can either take Dexter down, fulfilling her job in the Miami police force, or she can let him continue on. The first can’t happen unless the series is coming to a permanent end. The second would provide complications for her both morally and professionally. But both are preferable to option number three: Deb has to die.

Dexter spends this episode way too nonchalant. Is it because he thinks that Deb won’t tell? Or does he believe that he may have convinced her of his innocence? Both of those possibilities would be hopelessly naive. Or maybe Dexter just doesn’t know what to do. However, were that the case, one would think it would be reflected in his monologue. Instead, there is an utter lack of urgency about the Deb situation from the titular man.

Just before the big reveal last season, Deb is set up to have romantic feelings for Dexter. Might that color her decision? If she wants a full sexual relationship with her adopted brother, she may be less likely to turn him in. The thought of the two of them together is incredibly disturbing for most viewers. But Deb is led to her conclusion naturally, and given her scarred up brining, one can see how she might have inappropriate urges. Dexter, on the other hand, has little feeling to spare, so if he were to commit to Deb, it would be coming from a logical place, rather than because of any real feelings for her. While I seldom argue for leaving a plot hanging, let’s hope this topic is just dropped.

Seeing as flashbacks to childhood are part of the episode (with Parenthood’s Savannah Paige Rae playing Deb), romance will probably (thankfully) not figure into the proceedings nearly as much as a sibling bond. They might not be blood related, but Deb and Dexter were raised as brother and sister. They have a lot of history. No matter Deb’s initial disgust, she has to consider this when deciding what to do about Dexter.

Dexter and Deb aren’t the only two characters in DEXTER, and while the majority of “Are You…?” deals with the two of them, there are other happenings. A member of Miami Metro is killed. This is presumably part of a larger arc that may lead Dexter to the Big Bad of season seven. There is an international side to the story, which could move some of the action out of Miami in a way that DEXTER hasn’t explored yet. The potential here is quite exciting.

LaGuerta (Lauren Velez) has been a character that has confused me for years. Once upon a time, she was nice and loyal to (most of) her employees, even having a little crush on Dexter. By the time she married Angel (David Zayas), there wasn’t much to complain about in her character. But she got divorced, was eventually promoted, and last season she became a huge pain in the butt for Deb. Sure, the two women had never gotten along, but it was more than that. LaGuerta became power hungry and less scrupulous. Every drama series needs some tension among the cast, but this felt forced. It was a sad turn of events.

As season seven begins, it appears there might be some hint of a return for the LaGuerta we loved. I don’t know if she’s too far gone to be forgiven, but any likeability factor will not be restored easily. I’m glad DEXTER is choosing to pursue this avenue; I just wish it had never been an avenue that needed pursuing,

There is room for LaGuerta to go good again because Louis (Josh Cooke) decides to start causing trouble. This intern’s motivations remain murky, but he has not forgotten that Dexter disappointed him. If the serial killer isn’t willing to act like the benevolent mentor-hero that Louis wants, he’s not just going to sit by and leave Dexter alone. Whatever Louis is up to, it cannot possibly be long before Dexter gets wind of his new foe. Does this mean that Louis’s days are numbered?

Yes, there are some missteps in this episode. But it is a great season premiere, with a ton of awesome moments for Carpenter, and several new stories teased in. For that reason, I dare say that it’s one of the better openers DEXTER has done, and if this season can maintain the excitement and anticipation present in episode one, it’s going to be a satisfying year, much more so than last season.