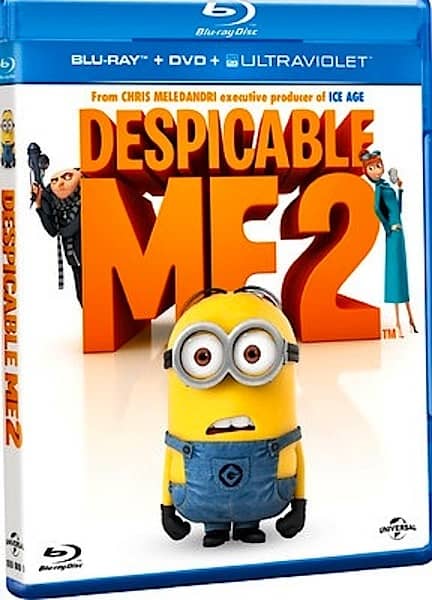 The  holiday season just got even brighter with the news that Despicable Me 2, the $872 million worldwide box office phenomenon and the year’s #1 comedy, arrives on Blu-ray™ and Blu-ray 3D™ Combo Packs, DVD and Digital HD including UltraViolet™ on December 10, 2013, from Universal Studios Home Entertainment. The film will also be available on Digital HD November 26, 2013, just in time for families to watch on the go as they gear up for holiday travel.  In addition to more than 45 minutes of hilarious and insightful bonus features, Blu-ray Combo Packs will include, from the makers of Despicable Me, three all-new mini-movies starring the film series’ breakout stars, the mischievous but lovable Minions.  For a sneak peek of these mini-movies, and other great weekly offers from Despicable Me 2, call Gru at **DM2 (**362) from your mobile phone.*

“Despicable Me 2 is the top box-office comedy of the year and is poised for spectacular success on home entertainment this holiday season,” said Craig Kornblau, president of Universal Studios Home Entertainment. “This adored franchise, with its iconic lovable Minions, stands apart from all others and is sure to be at the top of everyone’s wish list this December.”

In this follow-up to the 2010 worldwide blockbuster, Steve Carell (“The Office,” The 40-Year-Old Virgin) returns to play Gru, the newly reformed master criminal now trying to live life as a normal dad to his three adopted daughters. Carell leads a voice cast of comedic powerhouses that includes Kristin Wiig (Bridesmaids, Saturday Night Live), Benjamin Bratt (Miss Congeniality,Snitch), Miranda Cosgrove (“iCarly,” Despicable Me), Russell Brand (Get Him to the Greek, Hop), Steve Coogan (Percy Jackson& the Olympians: The Lightning Thief, Tropic Thunder), Ken Jeong (The Hangover, Turbo), Elsie Fisher (Despicable Me, Raising Hope), Dana Gaier (Despicable Me) and Moisés Arias (Ender’s Game, “Hannah Montana”).  Despicable Me 2 is hailed as “Brilliant! One of the funniest, laugh-out-loud, most enjoyable movies ever” by MovieGuide®.

This Thanksgiving, Manhattan will share a memorable moment of Minion Madness with the world when a brand newDespicable Me 2 float joins the 87th Annual Macy’s Thanksgiving Day Parade®  in celebration of the home entertainment release.   Despicable Me 2 will roll out a deliciously decorated cupcake parlor inspired by the hilarious and heartwarming film and featuring Gru, the reformed master criminal turned devoted dad, and a gaggle of his unpredictable helpers, the Minions — including a surprise new character — to keep things lively and entertaining for the film’s millions of fans, both young and old. The 86th Annual Macy’s Thanksgiving Day Parade airs nationwide on NBC-TV, on Thursday, November 28, 2013 from 9:00 AM– 12:00 PM in all time zones.

The Blu-ray™ Combo Pack and Blu-ray™ 3D Combo Pack include a Blu-ray™, DVD and Digital HD with UltraViolet™.

SYNOPSIS
Gru, his adorable girls, and the mischievous Minions are back with a cast of unforgettable new characters in the blockbuster sequel to the worldwide phenomenon.  Just as Gru has given up being super-bad to be a super-dad, the Anti-Villain League recruits him to track down a new criminal mastermind and save the world.   Partnered with secret agent Lucy Wilde, Gru, along with the wildly unpredictable Minions, must figure out how to keep his cover while also keeping up with his duties as a father.  Assemble the Minions for laugh-out-loud comedy in “one of the funniest, most enjoyable movies ever!” (MovieGuide®)