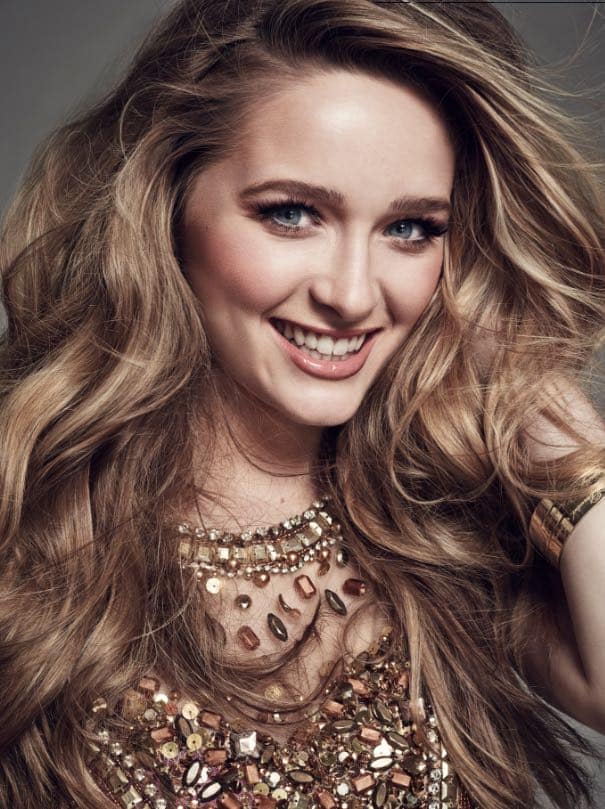 Starting college is supposed to be the best time of your life, but two girls’ friendship is tested when one is accepted into the hottest sororities on campus. Then her body turns up and her best friend is implicated in her murder.  Starring Greer Grammer as Samantha, she races against the clock to find the real killer before it is too late.  Known for her joyous performance as Lissa in MTV’s comedy series AWKWARD., Greer’s performance in Lifetime’s new drama DEADLY SORORITY is empowering. The world mistakenly perceives young women as victims, yet it is that common misperception that shatters when  this tale of bravery and persistence is revealed.  In an exclusive interview, Greer talks about her new role in DEADLY SORORITY as well as what she hopes her fans will do to to empower themselves.

What initially appealed to you about the role of Samantha Blake and working on the DEADLY SORORITY?
GREER:  I loved that it was different than any other role I’ve played. I’m usually a cheerleader or a ditz, so it was really fun to be able to play the sort of unpopular, down to earth girl for a change.

How would you describe who Samantha is?
GREER:  Samantha is someone who puts her friends first. She’s a good hearted person and she’s just really excited to start college with her best friend. Sam and Kristina are very different but they’re love is so strong. Sam is someone who is funny, sarcastic, she doesn’t take herself too seriously and she believes in telling the truth.

What do you most admire and/or like about Samantha?
GREER:  I admire her will. She doesn’t give up very easily and she never stops fighting for the truth. Even when you think she’d be down and give up, she never does.

What is it like working alongside Chloe Babcook, Steve Bacic, Moira Kelly, and Keenan Tracey?
GREER:  So much fun! I was a huge ONE TREE HILL fan so getting to work with Moira was so fun for me. I felt like such a fan girl! Steve was always so funny on set and getting to work with Chloe and Keenan was so great because we’re all around the same age so it was really just like hanging out with a bunch of friends. Plus, everybody was so talented that it made the work easier which is always nice.

What has been your favorite part about working on this project?
GREER:  I loved getting to go to Canada! I had never been to Vancouver and I’ve always wanted to go so getting to shoot and be there was a really cool experience.

You also appeared in MTV’s AWKWARD. as Lissa.  Remembering that experience, what did you love the most about appearing on the show?
GREER:  I loved so much about AWKWARD. but I think what I loved the most was creating the family that we created on that show. We had been together for 5 years (6 if you include the pilot) and we really became a family. We’re still all so close, but I do miss being on set and filming and telling those stories with those people. I also loved how much the show resonated with our fans. The messages we have received about people who love the show and how it helped them get through school is amazing. It’s really fun to see how your work can help others.

If there were one role you would like to revisit, which would it be and why?
GREER:  Oh that’s tough! I feel like I’d really like to revisit Leslie Van Houten from “Manson’s Lost Girls.” That was such a crazy experience and playing her was so interesting. But Sadie from “Altitude” was also really fun!

You seem to take on roles that are very challenging. Do any of your characters and the situations they find themselves in ever leave a lasting impression on you?
GREER:  Yeah all the time! Leslie from “Manson’s Lost Girls” is probably the one that left the biggest impression. That was an interesting role because Leslie as a person, from my research, was a very loving hippie — she was a prom princess at her high school and was sweet and nice — she just happened to stumble upon a very charismatic monster. So getting to play that and knowing that that can happen — that people that are good can be influenced to do such evil things — it really stuck with me.

Has there been any great advice you have gotten?  What advice would you offer to other upcoming and aspiring actors?
GREER:  To study! Keep taking classes. As an actor you can never learn too much. And I find I grow so much every time I’m back in class. My parents were very adamant about me “learning my craft” and it’s something I’m so thankful for. You only get better from working with other actors and continuing to play.

Do you have any other upcoming projects that you can share that fans should keep an eye out for?
GREER:  I just had a movie come out called “Altitude.” And I’m currently shooting a movie set in WW2 called “Burning at Both Ends” that I’m really excited about.

At a time when women’s voices are rising to be heard and respected around the country and world, what do you recommend your fans do to lend support in that endeavor?
GREER:  I think you do everything you can! Continue to speak out. I think that’s the hardest habit for women to break — we’re taught to apologize even when we’ve done nothing wrong, we’re taught to be polite, we’re also taught through society that even when you do speak up, your voice might not matter. But the more we speak up about the injustices that we see or that happen to us, the more we say it is not okay.

To see more of Greer’s great work, be sure to tune in for the premiere of DEADLY SORORITY on Saturday, May 6th at 9:00 p.m. on Lifetime.  Also be sure to keep an eye out for her film “Altitude” coming out later in 2017.  To find out more about Greer’s future projects, be sure to follow her on Twitter: @Greer_Grammer