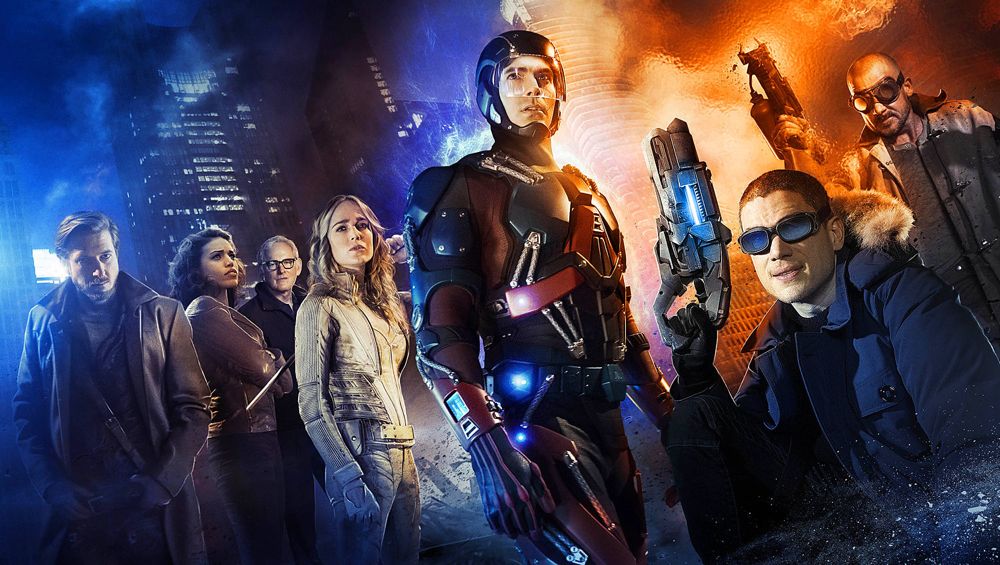 Thursday, January 21st brings one of, if not the, most anticipated mid-season premiere on the broadcast networks. DC’S LEGENDS OF TOMORROW, a spin-off combining characters from the popular shows The Flash and Arrow, launches, expanding the comic book universe on the network, and making three simultaneously running series set in the same universe. It’s the culmination of the crossovers that have worked very well for the two shows, and a chance to see some fan favorite characters a lot more often. While Marvel is winning at the box office, DC is dominating the small screen.

The premise of DC’S LEGENDS OF TOMORROW is well publicized, so I don’t mind recapping it here. Rip Hunter (Arthur Darvill, Doctor Who, Broadchurch) comes back in time from a bleak future in which Vandal Savage (Casper Crump) is destroying the world. To prevent catastrophe, Rip assembles eight people remembered in history as legends to team up and stop Vandal before his rise to power. These include: Professor Martin Stein (Victor Garber) and Jefferson Jackson (Franz Drameh), who together become Firestorm; the resurrected Sara Lance (Caity Lotz), now the White Canary; Ray Palmer (Brandon Routh), a.k.a. The Atom; the immortal Hawkman (Falk Hentschel) and Hawkgirl (Ciara Renee), also known as Chay-Ara and Khufu, who have their own history with Vandal; and the villainous Leonard Snart (Wentworth Miller) and Mick Rory (Dominic Purcell), dubbed Captain Cold and Heat Wave because of their weapons.

The group is undeniably fun. By including antagonists alongside protagonists, there is natural conflict and varied motivations. The spectrum runs from the idealistic (Ray) to the in-it-for-themselves (Leonard and Mick), from those seeking redemption (Sara) to those just out for adventure (Martin). Some have a personal stake in the outcome, while others want to prove something to themselves. None stand out as “the” star, all coming from second-fiddle status on Arrow and / or The Flash, making DC’S LEGENDS OF TOMORROW one of the truest, most balanced ensembles assembled.

While not all of the actors are on the level of Garber or Darvill, both fantastic actors, they are well used in these roles. The writers have smartly figured out the characters, and played to the strengths of the individual performers as much as possible. Miller and Purcell are delightfully re-teamed after their stint on Prison Break as brothers, albeit with a totally different chemistry. Overall, it’s a nice assembly.

I wouldn’t say my review of the pilot is quite as glowing as how excited I am about the premise. With expectations high, DC’S LEGENDS OF TOMORROW has a lot to live up to, and while it gets off to a decent start, it still has some way to go.

The main flaw I see is that this series was created when a group of people thought “Wouldn’t it be fun to see ____ together with ____.” It’s a hodgepodge of characters, not at all like an Avengers best-of-their-class team up. This is a great concept, but it takes a lot of skill and finesse to make it work. The first two hours fall just a bit short of that, at times having some really good interactions, particularly between Sara and Leonard, but at other times, feeling more like the idea is better than the execution.

There is hope, however. While the premise seems a bit weak at the start, there is a twist late in the first hour that does a lot to righting the course of the story and making things that seem off make more sense. I can’t reveal what I mean by that, but if you can get through that rocky beginning, it will result in a good pay off. The second half of the pilot, which will air a week later, is much better because of it.

At the end of the day, I remain excited about this show. It has a bit of maturing to do, not hitting the ground running as strong as The Flash did, but with a better start than Arrow’s. The sheer adventure element is so much fun, and I do look forward to the character growth that will surely emerge, as well as the larger scale story that this series is tailor-made to tackle. The CW has very valuable property on their hands with their DC partnership, and I hope they continue to make good use of it.

DC’S LEGENDS OF TOMORROW premieres Thursday, January 21st on the CW with the first half of the two-hour pilot.