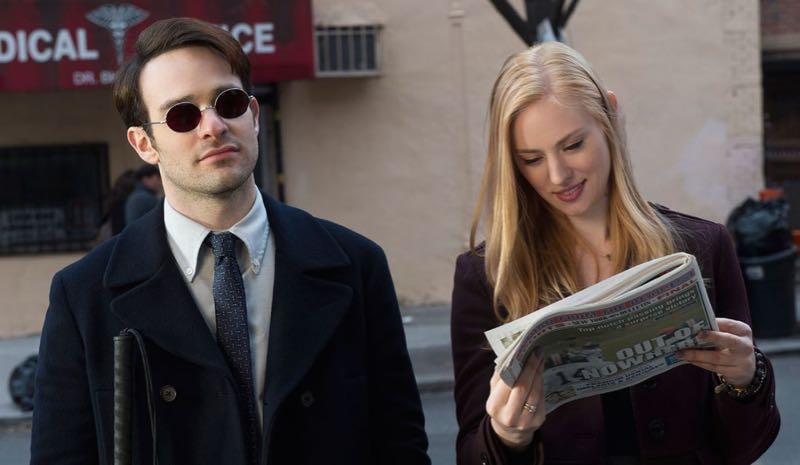 Each of Marvel’s films has been quite different from the others since the comic book formed its own movie studio. Look at Iron Man, Iron Man 3, Thor, and the two Captain Americas and you will find very different pictures in terms of tone, story structure, and purpose. What I’m getting at is that, as Marvel expands to the small screen, don’t expect their newest efforts to match those of Agents of S.H.I.E.L.D. or Agent Carter, which aren’t all that much alike, either.

The first entry in Marvel’s latest television project is Daredevil, which posted its entire first season on Netflix on Friday. DAREDEVIL is far darker than Agents of S.H.I.E.L.D., opening with a boy (Skylar Gaertner, I Smile Back) being blinded by acid, then transitioning to a Catholic, guilt-ridden man (Charlie Cox, Boardwalk Empire) who wants to save his neighborhood, but unhappy about the methods he must use to do so. Both characters are Matt Murdoch, a.k.a. Daredevil.

Matt is a blind lawyer with extremely heightened sense who dresses all in black at night to beat up bad guys using his martial arts skills. As DAREDEVIL begins, Matt is just beginning this quest, though we don’t know why he has chosen now to do so, in the Hell’s Kitchen neighborhood of New York destroyed during the battle in The Avengers film, simply referred to as “the incident” in this series. A crime lord named Kingpin (Vincent D’Onofrio, Law & Order: Criminal Intent) has staked a claim over the area, and Matt is going to make sure he doesn’t keep it.

The methods Matt goes by are vicious, and the violence in Daredevil is pretty brutal. An exec’s earlier assertion that show would be PG-13-equivalent is not at all accurate, with some R-level stuff present in the first hour alone. There is blood, sure, but also just some gritty, gruesome stuff that would not be allowed on the alphabet network, so it’s good Netflix is carrying this arm of the company. The show does stop short of nudity, thus far anyway, and there isn’t a lot of bad language, but the program is definitely not for kids.

Kids may be bored by it, anyway. Between fight scenes, the story plays out fairly slowly. Daredevil’s origins are not revealed in the pilot to any real extent, nor is Kingpin visible, working through his minions, including Leland Owlsley (Bob Gunton, Royal Pains, 24, The Shawshank Redemption) instead. The writers are not in a hurry to tell viewers everything, preferring to let the tale play out over thirteen episodes, not one.

This running time, about double what two trilogies of films would give the character, allow for a more complex approach. Many of the movie Marvel heroes get two or four hours to be introduced before being thrust together in The Avengers, and have to go through much of their growth arcs off-screen, between movies. Daredevil and his peers (three more superheroes are getting their own seasons on Netflix) are allowed at least thirteen before The Defenders series brings them together, which is quite welcome given the complexity of the protagonist, and allows for more depth in the character.

Matt is a complicated individual. More so than others in his field (I’m talking both lawyers and vigilantes), he has qualms about what he does. He’s a man of faith who thinks he is betraying his principals, but doesn’t see any other way to save people, which he feels an irresistible calling to do. He’s a tortured soul, and this adaptation does a top-notch job of illustrating that.

Which is not to say there are not lighter moments in DAREDEVIL. A Hallmark of the Iron Man and Avengers pictures, among others, is the humor, sometimes expressed in odd moments. For that purpose, this series gives us Matt’s partner at the firm, Foggy Nelson (Elden Henson, The Mighty Ducks, The Hunger Games: Mockingjay), a larger-than-life individual who frets and schmoozes in equal measure. There’s also a possible love interest for one or the other lawyer, Karen Page (Deborah Ann Woll, True Blood), who (SPOILER ALERT) is involved in their first awful case, but who sticks around to help them out, and will probably be a brighter light after the pilot.

In short, DAREDEVIL really does have it all. It gets to take its time telling a complex, engaging story of a hero unlike those we’re used to in the Marvel franchise. I’m really looking forward to binge watching the entire season.

DAREDEVIL season one is available on Netflix streaming now.