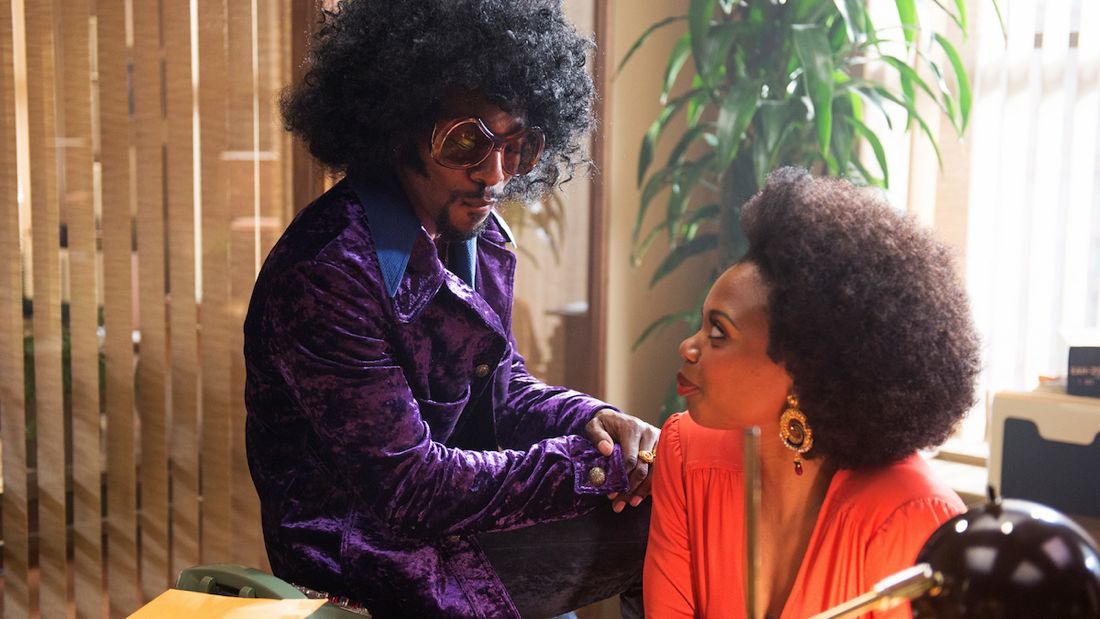 HBO’s new series Vinyl infuses each episode with killer music and historical flourishes to bring the ’70s music scene to vivid life. Daniel J. Watts is the latest actor to immerse himself in the world of the Martin Scorsese produced series as funk singer Hannibal. First appearing in Episode 4, Watts’ Hannibal is a charismatic character who owns the room the minute he walks into it. Hannibal will return in Episode 5, airing Sunday, March 13 on HBO, to sort out his contract negotiations with Richie (Bobby Cannavale) in an episode Watts says will “get steamy.”

As an accomplished actor and musician himself, Watts loves the ’70s set world of Vinyl. Having appeared in eight Broadway plays, including the hit musical Hamilton, movies like Freedom, and popular TV series The Good Wife and Boardwalk Empire, Watts is no stranger to the stage or screen, but he is definitely having a moment right now. Between his scene-stealing turn in Vinyl and his role in the cultural phenomenon that is Hamilton, Watts is definitely one to watch.

The fascinating actor recently spoke with Seat42F about what is next for Hannibal, what he loves most about Vinyl, and what it is like to be part of a musical that is reinventing Broadway.

Is Hannibal based on a real musician?

Watts: No, he is kind of fashioned after Sly Stone as far as his presence and the way he carries himself. But he is totally new and original, and they kind of let me do whatever I wanted to do.

What does Hannibal think of Richie and American Century?

Watts: He has heard about all the things that are going on. Everyone heard that the company was being sold so I think Hannibal had readied himself to be headed up by this huge conglomerate and then it didn’t happen. Springfield left and now Richie is doing coke again – I think all of these things are a little daunting to Hannibal.

It felt like there was a lot of history between Richie and Hannibal. Is that something that will be explored more?

Watts: Absolutely. We go back. I think you are going to question how close we are. Like, what is the nature of our relationship? Is it just business, or is it more platonic? And where is it going?

How far will Richie go to keep Hannibal with the label?

Will the door be left open for Hannibal to return after Sunday’s episode?

Watts: Oh, absolutely. There is always room for Hannibal to come back, unless Terence Winter pulled a fast one on me.

Is there one scene or moment that you feel like defines Hannibal as a character?

Watts: I think the scene with him and Richie in his office. He takes the sunglasses off so they can have a genuine talk and he doesn’t have to be on. At the same time he still is who he is. Richie shows up with some cocaine and he’s not going to turn down his cocaine. Some groupies show up and yes, let’s have that as well.

But he’s also a music fan and he listens to the music Richie has to play for him, and I think like most artists they genuinely like to chill. Then you get to a certain place where there is a star status and you are finding that balance between the two. Hannibal didn’t really want to talk business when he sat down in the office, but Richie started bringing it up. It’s that juggling act: you got to see a lot of versions of Hannibal in that scene.

What was your favorite part of being on the Vinyl set?

Watts: It was everything down to wardrobe, which was the first place I went. Everything was custom made and tailor-made perfectly. I had some suede pants and a silk shirt and a velvet coat at one point. Then I had a leather jumpsuit with rhinestones. Just the dress up aspect of it was awesome.

Then to be in the room with Bobby Cannavale and Olivia Wilde, and great directors like Peter Sollett and S.J. Clarkson, there was just an environment there that was really welcoming and nurturing as far as being an actor. Just the whole experience, I have nothing bad to say, not one thing.

You were cast kind of last minute. Can you talk about what that experience was like?

Watts: I was in Los Angeles at the time and I had sent in a tape. I hadn’t thought anything about it, and then about a month later I got a phone call asking if I could come to a producer session, and I couldn’t at the time. Then over the weekend my tape was being seen by Martin [Scorsese] and Mick [Jagger] which was crazy to me.

I started thinking: “You might actually get this,” and wondering if I would be back in time for the table read. Then I didn’t hear anything, and I heard the table read happened and they still didn’t have a person. They were still looking. I happened to be in New Jersey for a wedding and as the toasts were happening, I got a phone call from my agent saying sneak out. They needed me to come the next day, one more time for a producers’ session so HBO and everyone could get a sense of who I am. The next morning I came back to New York, did the audition, and later that night I got the part. Then two days later I was on set.

As a musician yourself, what is it like to be on a show like Vinyl that transports you back to the ’70s music scene?

Watts: I’m a huge James Brown fan and just that era of music, 1973-74, funk era, Curtis Mayfield, The Johnsons, Sly Stone – there was a lot of great music being made at that time. It was almost like I was feeding my soul and my ego at the same time. I’m not a Hannibal character, but I like to hope that I can have that kind of charisma and presence when I walk into the room. Just being able to have a sample for those few weeks was awesome.

You are currently starring in Hamilton, which is a total phenomenon on Broadway. What has that experience been like?

Watts: It’s actually the most incredible feeling ever. Hamilton is my eighth Broadway show and I have never witnessed anything like this before, ever. I don’t think anyone has ever witnessed anything like this before. Broadway used to be part of popular culture and it hasn’t been in a long time. Now in an incredible way, Hamilton is bridging that gap again.

From performing on the Grammys, to winning the Grammys, to being a household name, to me sitting on the train next to a construction worker and seeing he has Hamilton playing on his iPod, it’s unprecedented. I’ve never seen anything like it. It’s wonderful to be part of that experience.

What do you think it is about Hamilton that has resonated with audiences?

Watts: I think it starts with the story itself. As Americans, it’s our story. It’s how we originated. Then it is being told in a non-traditional way that invites anyone and everyone to be part of the experience. Coupled with the fact that it is history, older people can enjoy it and younger people can enjoy it. It crosses the socioeconomic boundaries. The music crosses those boundaries, and everyone can sit in the same place and enjoy it because it is good storytelling.

You’ve been in several major TV shows from Boardwalk Empire to The Good Wife and now Vinyl. Is there a show on your radar that you would love to be a part of that you haven’t been on yet?

Watts: Yes, I think I would like a good role on House of Cards. House of Cards is just killing me right now. It’s really smart, and I think that would be a good one.

What is your favorite Scorsese movie?

Watts: It might be The Departed. Yeah, I’m going to stick with The Departed. He has so many great ones, but that was when I actually started paying attention to how much I actually liked Scorsese.

See Watts as Hannibal in Vinyl this Sunday, March 13 at 9 p.m. on HBO.