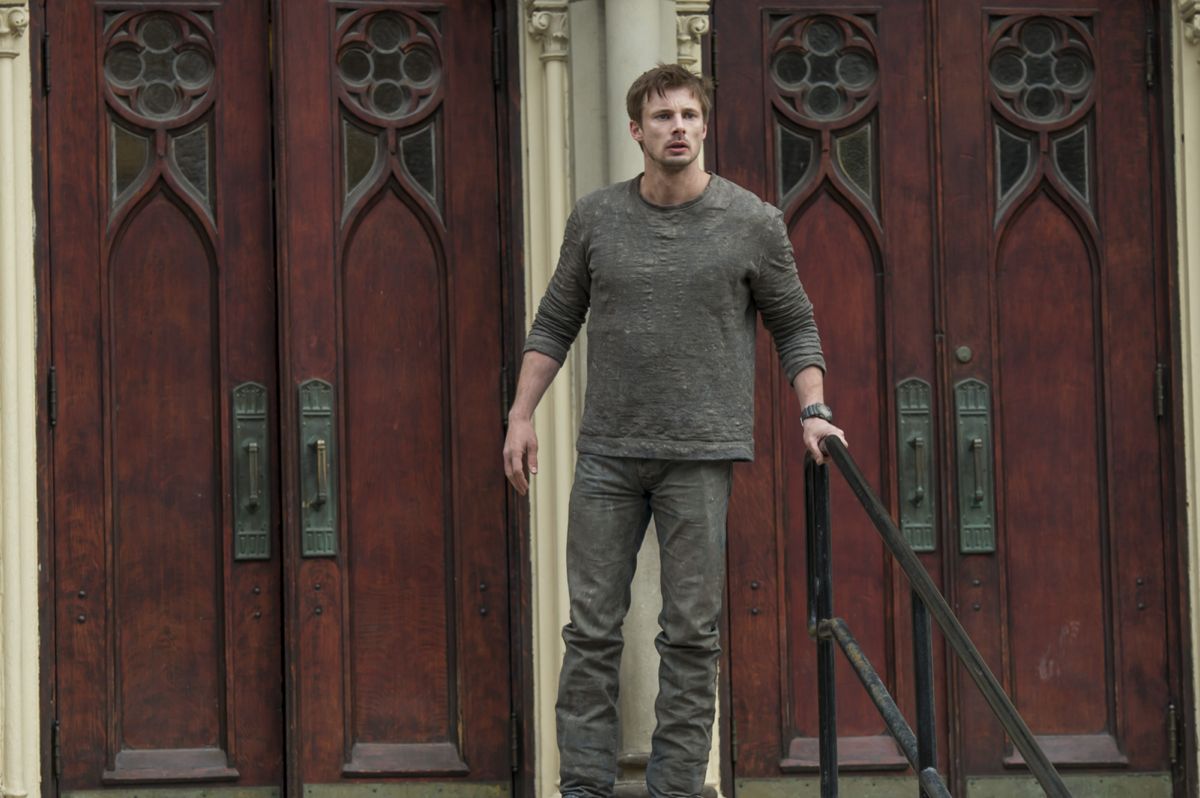 A&E has had decent success with its horror movie prequel, Bates Motel, so it’s no surprise that it is doing another show spun-off from a film in the genre, even if it’s taken awhile to do so. This week, DAMIEN premieres on the cable network, a sequel to Richard Donner’s The Omen (1976). Set thirty years later, young Damien has now come of age, just as the end of the world is upon us.

It’s very early in this show so I could be wrong, but I think the central conflict of DAMIEN is flawed. We are introduced to Damien (Bradley James, iZombie, Merlin) as a compassionate war photographer, with none of the baggage of his past or origin. Gone are the creepy things surrounding him from the movie, seemingly having stopped just after the events of the film. He doesn’t know who he is or what his purpose is supposed to be.

Obviously, that must change, so DAMIEN introduces a number of startling, creepy things to begin popping up around Damien, bringing back his memories of the past, and sending characters to tell him who he is. Damien is expected to fulfill his role as the anti-Christ, even if it’s not clear what that means yet to him or to the viewer.

I just don’t understand. Are we supposed to root for Damien to descend into darkness? Or do we want to see him heroically deny his heritage and be a force of good? Would that even be possible?

With Bates Motel, we know the lead character will go bad, but it remains entertaining to watch his growth arc. In DAMIEN, Damien seems completely resistant to his fate and at odds with what he’s supposed to be doing. He’s not showing signs of changing based on events, at least not yet, so if he does go dark, it will be against his will, making his character’s journey meaningless. Unless Damien is supposed to save the world, but again, that doesn’t seem likely.

All of this adds up to nothing captivating, as near as I can tell. If the story is destined to be a tragic one, and not in a natural, progressive way, but because of supernatural forces so powerful they cannot be stopped, why do we want to watch? To see some faceless power destroy a character we’ve been made to care about? Who wants to see that?

It also makes no sense to me the huge gap in Damien’s life. People he loved were harmed or killed early on and now, but nothing in between? Why not? It seems to me either nothing would occur around him until this time, or it would occur constantly throughout his life. Am I right?

(Yes, I realize The Bible has a similar gap in the life of Jesus Christ, but he was the catalyst for much of what happened in that tale, not just the non-participant center of the storm.)

This is unfortunate because the roster behind DAMIEN is a promising one. Glen Mazzara, a former showrunner for The Walking Dead, is the creator leading the charge. The cast includes the terrific Scott Wilson (The Walking Dead), the intriguing Barbara Hershey (Once Upon a Time), and reliable players David Meunier (Justified), Omid Abtahi (Argo), and Megalyn Echikunwoke (The 4400). Those names made me hopeful, even though The Omen is a move I’d never watch all the way through (I find it more disturbing than scary). But despite a decent looking production, it just doesn’t do what it needs to do as a story, lacking cohesion and clear direction.

As such, I sadly cannot recommend DAMIEN, as I likely won’t ever give it another chance.