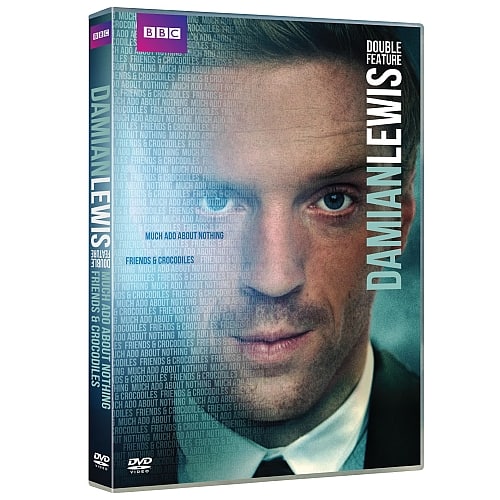 Seat42f and BBC Home Entertainment have teamed up to give THREE lucky winners a copy of DAMIAN LEWIS DOUBLE FEATURE on DVD. For a chance to win leave a comment below telling us why you want to add DAMIAN LEWIS DOUBLE FEATURE to your DVD collection. Only one entry per person. Contest ends September 4th. Winners will be notified on September 5th via email so make sure to use a valid email address when you post your comment.

Before Band of Brothers and Homeland, Emmy® and Golden Globe®-winning actor Damian Lewis was turning heads in Friends and Crocodiles, from acclaimed director and playwright Stephen Poliakoff, and Much Ado About Nothing, a modern-day take on the Shakespeare classic set in a London television news studio.  Now, for the first time ever, BBC Home Entertainment brings together both early performances in a compilation, Damian Lewis Double Feature, available on DVD August 27, 2013. These two contrasting BBC features brilliantly demonstrate the great dramatic and comedic talents that make Damian Lewis such a fascinating actor.

Friends and Crocodiles follows the shifting power balance between a boss and his secretary as their careers rise and fall through the changing corporate landscape of 80s and 90s Britain. Lewis stars as Paul Reynolds, a visionary entrepreneur who hires Lizzie (Jodhi May, Strike Back) to bring order to his life as his assistant. Over the course of the next two decades their paths part and cross again as they both chase their dreams, only to realize that they were born to work together.

In Much Ado About Nothing, the tension is high between co-anchors and ex-lovers Benedick (Lewis) and Beatrice (Sarah Parish, Hatfields & McCoys). The two arch-enemies’ bickering is getting to be too much to take until their colleagues at South West TV come up with a cunning plan to shut the pair up. Meanwhile, lovely weathergirl Hero (Billie Piper, Doctor Who, Secret Diary of a Call Girl) and dashing reporter Claude (Tom Ellis, Once Upon a Time, Merlin) are a match made in heaven – but does everyone want to see them so happy? Much Ado About Nothing originally aired as part of the BBC’s “ShakespeaRe-Told” series in the UK and maintains the wit and humor of the beloved play.