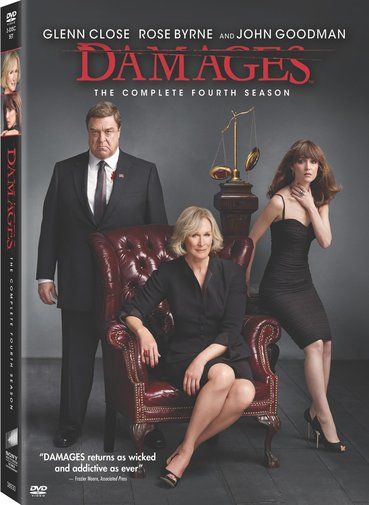 Seat42f and Sony Pictures Home Entertainment have teamed up to give THREE lucky winners a copy of DAMAGES Season 4 on DVD. For a chance to win leave a comment below telling us why you want to add DAMAGES Season 4 to your DVD collection. Only one entry per person. Contest ends July 3rd. Winners will be notified on July 5th via email so make sure to use a valid email address when you post your comment.

Arriving on DVD in a three-disc set, DAMAGES: THE COMPLETE FOURTH SEASON will include all 10 episodes, deleted scenes and a blooper reel. The set will also come with two new featurettes – A Case for War, a behind-the-scenes discussion of the fourth season with the cast and crew, and The Evolution of Patty Hewes, in which Glenn Close looks back over four seasons to examine and discuss the growth of her