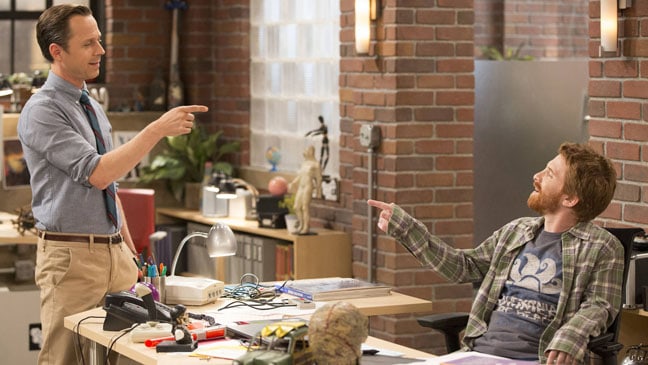 FOX’s DADS seems to be a recipe for success. Take two very talented young, but experienced, actors, mix them with a couple of screen veterans, toss in some wonderful supporting cast members, and have Seth MacFarlane and a couple of his Family Guy pals turn it into a father-son sitcom. It’s a no brainer, right?

Well, unfortunately, not so much. At least in the “Pilot,” none of the jokes land and the story feels predictable and stale. Familiar situations are milked dry, and performances are wasted on paces that an amateur could walk through. The result is not at all pleasing, and not likely to be long-lived.

The two central characters are Eli (Seth Green, Robot Chicken, Austin Powers) and Warner (Giovanni Ribisi, Ted, Friends), long-time best friends that run a video game company together. This is a young, hip profession that should appeal to the prized young, hip, male demographic, one would think. After all, what’s better than hanging out with your buddy playing games all day? Add to that a hot Asian assistant named Veronica (Brenda Song, The Suite Life, The Social Network), whom the boys get to dress up as a Japanese school girl to impress Chinese investors, and it’s an adolescent’s dream.

First, just to get this out of the way, the controversy over Veronica’s outfit is a non-one. She is presented as a strong, assertive woman who is working to get ahead, and will definitely be rewarded for her devotion to the team, or else. The costume is a visual gag, no more, and does not demean her in any serious fashion.

But, neither is the business environment a solid concept. For one, little time is spent focusing on the work, so their company could produce anything and the premise would be the same. If DADS is going to go to the trouble of creating the fun environment, then they should be using it. Also, Veronica seems to wear the pants in the office, so the guys don’t even appear to be in charge. It’s all a waste.

Warner is currently struggling with his father, Crawford (Martin Mull, Clue, Arrested Development), moving in with him. Warner’s wife, Camilla (Vanessa Lachey), and two children don’t appreciate the inconsiderate intrusion, but Warner can’t bring himself to confront Crawford about anything. Things get worse when Crawford, ever the “entrepreneur, ruins a business deal.

The problem isn’t the avoidance of any type of confrontation, as that is a reasonable, interesting dynamic, but rather that Crawford could possibly be so horrible and still be loved by his son or viewers. Mull is a gifted actor, but struggles to make the character the least bit sympathetic. He hams it up for a laugh, including in a scene with the other dad, who we’ll get to in a minute, but it makes the emotional stuff seem thin. It just doesn’t work.

Also, Camilla is a one-note stereotype and the kids are completely unseen, despite a party scene at Warner’s house. Again, an opportunity to flesh out the world is traded for set dressing.

Single, care-free, man-whore Eli is judgmental about Warner’s situation until his own father, David (Peter Riegert, Damages Animal House), blows into town and ruins Eli’s life. Eli and David have the opposite relationship of Warner and Crawford, frequently yelling and acting out. Again, this is played to the extreme in such a way that it’s hard to care about the pair.

The best work of the entire half hour is done by Green, who does overdo it with the physical pantomiming, but shows a soft side when finding out about David’s bad luck. It’s at least a relatable performance amid the more cartoonish ones. But it just doesn’t cut it in any otherwise boring installment.

The problem is, by and large, than instead of concentrating on what makes these four men tick and how they relate to one another, the writers try to deliver bit after bit. That may work for an animated series like Family Guy, but does not for a live action show, unless it’s the caliber of Childrens Hospital, which this is not. Things that are supposed to be funny, such as a fighting-over-a-check scene and a portrait in Eli’s apartment, are definitely not. Sadly, DADS is not on my list of recommended new series this fall.

I must mention that DADS puts Tonita Castro back to work, as she deserves to be, but sadly, it likely will be a quicker gig than she had on Go On.