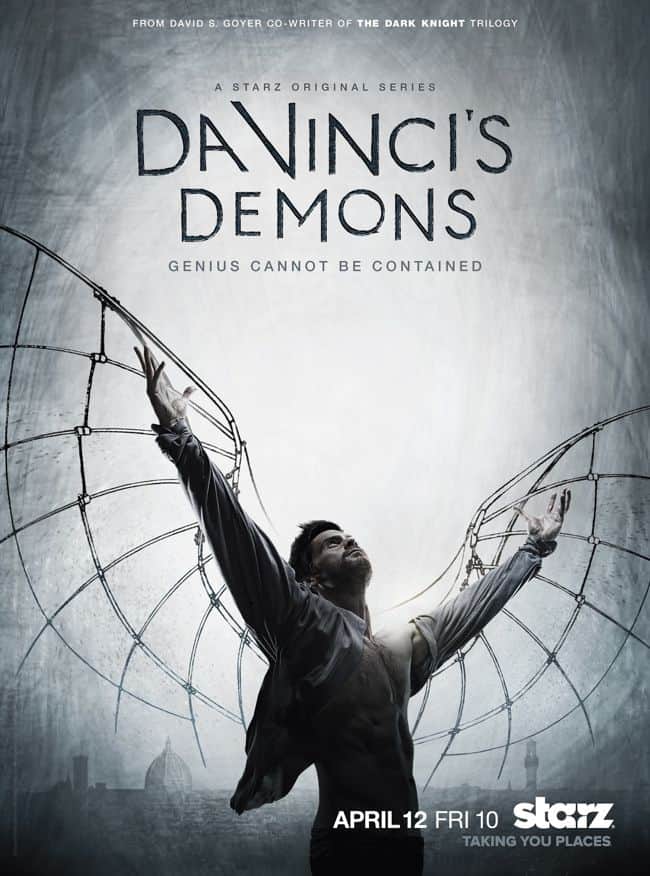 The key art features da Vinci (played by Tom Riley), an artist, inventor, swordsman, dreamer and idealist, with one of his famed inventions sketched behind him.  Da Vinci’s flying machines have fascinated and inspired people for centuries and are a symbol of his genius and iconoclasm.

“Leonardo was a transformational figure—the original Renaissance man and the kind of genius that only emerges every thousand years or so,” said series creator David S. Goyer.  “What I like about this image is that it embodies a lot of the show’s themes.  It’s aspirational.  The triumph of the human spirit over ignorance and repression—the audacity of imagination.”

While the da Vinci depicted in the history books was renowned for his works of art and inventions that included the calculator, army tank, diving suit, solar power and many more, “Da Vinci’s Demon’s” depicts a 25-year-old da Vinci on the cusp of greatness, with intellect and talents that are almost superhuman. In the series, he struggles to live within the confines of his own reality and time, tortured by his unsurpassed intellect. He begins to not only see the future, but invent it.

David S. Goyer, known for co-writing The Dark Knight Trilogy, the upcoming Man of Steel and serving as story editor for “Call of Duty: Black Ops,” and “Black Ops II”, the most successful video game franchise of all time, also served as showrunner on “Da Vinci’s Demons” and directed the first two episodes.

After its premiere on Friday, April 12th at 10pm ET/PT, following the finale of “Spartacus: War of the Damned,” “Da Vinci’s Demons” will air Friday nights at 9pm ET/PT on STARZ.