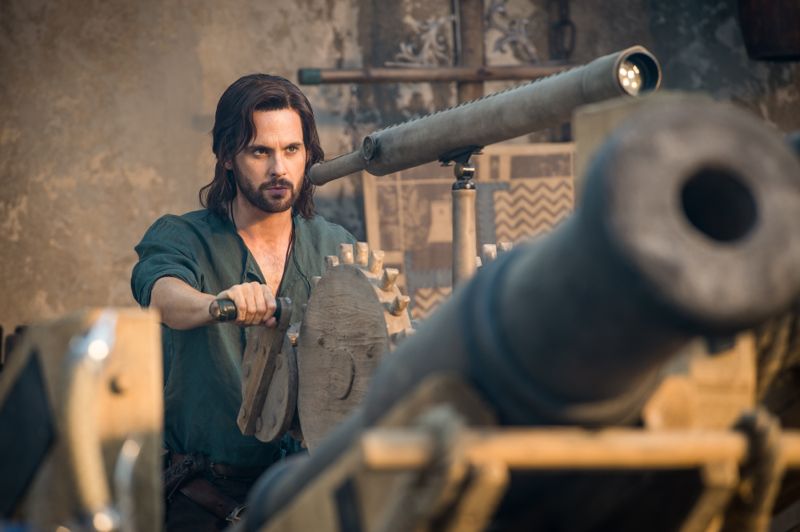 When Starz first announced they were turning famed Renaissance man Leonardo da Vinci into something of a superhero for Da Vinci’s Demons, the concept sounded outlandish. Guided by series creator David S. Goyer and star Tom Riley, Da Vinci’s Demons became one of TV’s most reliable action series, a fun and fascinating journey through history with a fantastical slant that delivered every single week. Three seasons later, Da Vinci’s Demons is coming to an end with a season set to up the emotional stakes and conclude Da Vinci’s transition from a youthful inventor into perhaps the most famed man in all of history.

The final season is set to be bigger, darker, and even more satisfying than what came before as Leonardo finds himself facing off against his own genius when plans for his inventions fall into the hands of the enemy. Season 3 premieres this Saturday, October 24 on Starz, but before you return to the world of Da Vinci’s Demons, read our exclusive interview with Goyer and Riley for a sneak peek at what is ahead and why saying goodbye to the series was just as hard for them as it will be for the fans.

In your own words, can you tell us what is special about Season 3?

David: It’s a war story. I’ve been saying earlier today that unlike some of the other seasons it takes place over a much more compressed timeline. It’s all about repercussions. It’s one thing to design a weapon. I mean in the first season he saw one of his designs used to kill a dozen or so people, but it is another thing when he sees a hundred or so, if not a thousand people killed by one of his designs. He needs to confront the application of the things he has invented, which is something all creators have to wrestle with.

Tom: Up until this point he has been denying there are any consequences to his actions, and suddenly he can’t deny it any longer. It’s right in his face.

David: And also this season, on a personal level, a lot of characters – Leonardo, Lucrezia, even Riario –they’ve all got these fractious relationships between a parent or two, and with those three characters in particular there’s some closure — Some good closure and some bad closure with the various parents that they have been looking for.

It feels like in episode one that the emotional stakes are much higher than ever before. Is that going to be an ongoing theme this year?

Tom: Yes. It’s very powerful and emotional and intense this year. Just when you think you’ve had enough gut punches, we will punch you in the gut again.

David: Sometimes during post-production it was on the fence whether or not we were going to do another season. What we have traditionally done is we’ve always done some additional shooting after we have been editing for awhile, and so it was during that period that we decided we would wrap things up. Part of the beauty of wrapping things up is you don’t have to tread water on things, you can just say, let’s bring this through to its conclusion.

Fans are hoping for a satisfying conclusion. I read that you filmed some extra scenes in post to make that happen, is that true?

David: We have some scenes that we kind of brought up that were scenes that even if they had happened in the fifth or sixth season we probably still would have done. It definitely doesn’t end on a cliffhanger. Even had we continued we were talking about Season 4 would have taken place during the Bonfire of the Vanities, which is 13 or 14 years later.

Tom: It was necessary to end the story of this particular phase of Leonardo’s life, which is what I think we’ve done. It feels very natural.

Seeing the opposing side use Leonardo’s inventions against the city is such an amazing moment in the premiere. How will Leonardo deal with the fallout going forward?

Tom: That was the most interesting for us. Up until this point it has been very easy for Leonardo to MacGyver his way out of every situation. Even the other characters keep saying to him: “you can fix this, you can fix this” because every other time he has. This is the first time that he’s really not going to have any idea how to do it and it is going to take him almost the entire season to work it out, how to heal the consequences of the destruction that he has sort of inadvertently caused.

Is there a particular episode or scene in Season 3 that you are really looking forward to seeing the fans react to?

Tom: I think Episode 8. There is a returning character, some nice beats to it, and there’s some wonderful nudity.

David: Yeah, Episode 8 is a lot of fun. There are a lot of really lovely moments in the final episode, but also throughout.

Tom: Yeah, the final episode. It really goes out with a bang.

The battles in Season 3 look so cool. Can you tell us a little bit about what it was like to film those?

Tom: We had a brand new stunt coordinator, Nick Gillard, who did some of the Star Wars prequels. He was determined to make the fights more electric and fluid than they were in the past, and I think that really shows. They were harder to learn, for sure, but they look great. And being on those sets, which we built outside for the first time so that we could deal with natural light rather than try to recreate it in a studio, with hundreds of extras and stuntmen in the fights, we were shooting and reshooting those battle sequences. We were still shooting sequences from Episode 1 when we were shooting Episode 10 trying to get it perfect, and I think it paid off. You’re going to hold your breath for the last 20 minutes of Episode 1.

David: I don’t think we could have pulled off the scope of the action that we do in Season 3 during Season 1. We’re much more practiced and sure of ourselves. It gets even bigger by the end of the season.

Tom, what was the most rewarding part of bringing Leonardo to life the past three seasons?

Tom: It’s been the arc I’ve been allowed to play. We always knew from the beginning that we were going to try to take him from kind of the cocky, arrogant dick to a version of the humble man we recognize from history. I wasn’t sure if we would necessarily be able to get there, but I think over these three seasons we have taken him from this man who didn’t really care about the consequences of his actions, who had a laissez faire attitude to his friends and family, who didn’t recognize the weight of his own genius to a man who is beginning to understand and recognize his importance to the world and his place in the world.

That’s the great thing about doing any long-running TV show. You get to play an entire arc and I think I’ve been able to play many, many facets of the same guy, which is something you don’t necessarily get to do with a film.

Is there a possibility of an event series in the future?

David: Look, if there is a demand for it, I would love to at some point in the future to do this Bonfire of the Vanities story. Should it happen, it would be a few years down the line. So we’ll see. What is neat about the television landscape right now is that you do have these series coming back from hiatus.

What do you hope fans take away from the overall journey they have been on with Da Vinci?

David: Well I hope that they appreciate that we did something unique, kind of bonkers. I’ve had some people tell me they have a new appreciation for history even though we’re not a straight historical drama, we’re a historical fantasy. I know I’ve learned now in reading all of Da Vinci’s journals, that this is a man who was practically deified who had a lot of foibles and self doubt just like all of us. So even these people we put on a pedestal are real people.

Tom: Something really beautiful happened when it was announced we weren’t coming back. People started writing these letters to me on Twitter that they took photos of so they could exceed the character limit, explaining what the show meant to them and how they had a new appreciation and they knew what they wanted to do with their life. How they didn’t know if they could be an artist, but this show had convinced them they could be that. It’s the kind of thing you hope art will achieve, especially a show like ours that was first and foremost fun. It actually seems to have spoken to people on a level that we couldn’t have predicted.

David: We were just in London and we were talking to some fans afterwards and it was really touching because they really adored the show. A lot of times as creators you are cut off from the people. It is really gratifying. I know as a consumer, as a fan of other things, I have been incredibly moved and inspired by film, TV, and art, so it is nice to have that effect on other people.

What was the hardest part of saying goodbye to Da Vinci’s Demons?

Tom: Probably saying goodbye to the people in all honesty. It becomes very familial. They’re a good bunch, there’s not a bad apple amongst them at all. So not being able to be around them. Also, not being able to play Leonardo because it was a once in a lifetime part. I don’t know when I’m going to get to play an artistic, nutcase, bisexual genius again.

David: I echo that. It’s not always the case you become friends with the people you work with, but we still hang out and I’m really going to miss them. I had a lot of fun with Tom, Blake, and Laura, really all of the cast and crew and I just adore all of them and I hope we get to work together again in the future.

Da Vinci’s Demons Season 3 premieres Saturday, October 24 on Starz. The entire season will be available on Starz on Demand the same day.