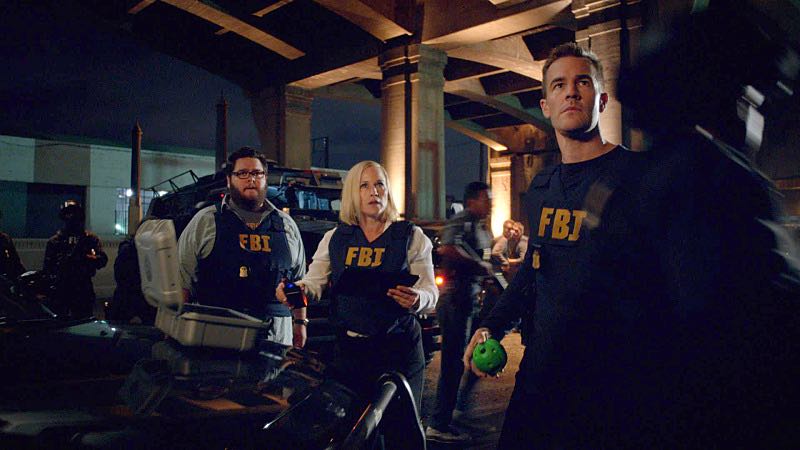 I have long been against crime procedurals. Any decent one is entertaining for a few weeks, but soon, by their nature, the shows devolve into repetitive drivel. When the characters are restrained form exhibiting any real growth and the story must wrap up neatly in an hour every week, the storytelling is extremely limited, making for very flat television. That’s why I watch very few of them.

With the premiere of CSI’s latest spin-off, though, CSI: CYBER, I figured I’d keep an open mind. After all, CSI is the mother of the modern crime show, and the cast is stacked with such greats as Oscar-winner Patricia Arquette (Boyhood, Medium), who already did a decent procedural, hilarious, talented James Van Der Beek (Dawson’s Creek, Don’t Trust the B—- in Apartment 23), and the greatly underrated Peter MacNicol (Numb3rs, Sophie’s Choice). Surely, if there were ever a show in this genre to appreciate, even if only watched briefly, it would be this one.

Sadly, I was sorely mistaken. CSI: Cyber is by far one of the worst television pilots I’ve watched in a long, long time, and that’s saying something.

For one thing, there is not even the pretense of character development. Despite this being episode one, we are introduced to the crime first and the characters second. The action goes right into a kidnapped baby, and all of the running time is devoted to stopping the infant kidnapping ring. A brief nugget is very heavy-handedly forced into the final scene in which we’re told something about the team leader, Avery Ryan’s (Arquette), past, but it’s far too little, too late, and handled poorly.

Secondly, CSI Cyber doesn’t stop to introduce us to anyone. They are all on the job, and while we get a couple of very small hints about their personalities as the hour unfolds, no time is spent setting up their relationships or how they fit on the team, nor is there anything to indicate these players are at all unique. Everyone is brought in in a very straight forward manner, and who they are now is probably still who they’ll be in one hundred episodes, should the show survive.

Third, the dialogue is horrendous. Absolutely terrible. Time and time again, characters utter the most trite, stereotypical, cliché lines. Many of these seem to be delivered merely because it’s time to say them in the story. Someone who has never watched an episode of any incarnation of CSI could predict what the characters are going to say next. There’s an utter lack of imagination present in the script.

Fourth, the effects are cheesy. When Ryan gives CPR to a baby, it’s incredibly obvious that there’s a doll in her hands. When she sits outside the Lincoln Memorial, it feels very staged. Several times throughout the hour, graphics pop up to show us technology, but it’s all superfluous. None of these give any insight into how a piece of equipment works, and the tech is talked about in such general terms that one wonders if these ‘experts’ know anything more than a customer service representative at Best Buy, or worse, your parents.

Fifth, the supporting cast is not strong. Our stars are joined by Charley Koontz (Community), Shad Moss (formerly known as the rapper Bow Wow), and Hayley Kiyoko (The Fosters). None have distinguished themselves before this, and arguably Koontz is the only one who does a serviceable job in this.

I did watch the entire pilot of CSI Cyber, and I am loathe to find a single reason to recommend this show to anyone. Even if you’re into this type of program, this is just about the worst example imaginable of how to make a series in the genre. Even the good actors don’t get to do anything anywhere near worthy of them. CBS is not known for their groundbreaking dramas, but CSI: Cyber represents a new low, forever tarnishing a respected brand and giving a bad name to the type or series it represents.

If you want a good laugh in the spirit of those who watch bad SyFy movies, as this show is barely a notch above them, and by taking itself seriously, may prove to be even worse, then check out CSI: Cyber, airing Wednesdays at 10 p.m. ET on CBS.