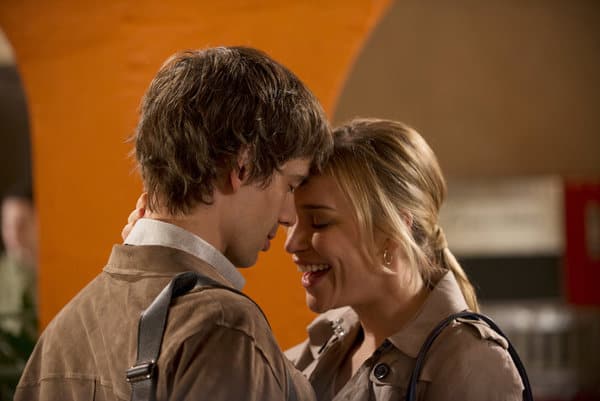 USA’s COVERT AFFAIRS is back tonight with “Vamos.” Annie (Piper Perabo) and Auggie (Christopher Gorham), now a couple, try to figure out what Henry Wilcox (Gregory Itzen) knows about Arthur (Peter Gallagher) that will bring him down. It’s a race against time, as Henry promises action will be taken by the end of the week. And it’s a challenge to see if Annie and Auggie can be romantic and still work together.

COVERT AFFAIRS is the latest drama in television to defy the old fear, often referred to as ‘The Moonlight Curse,’ and stick their leading guy and gal in a relationship before series’ end. As this is only the start of season four, COVERT AFFAIRS could potentially have a lot of life in it, going by the standard run of a USA show, and so it’s risking a lot to get rid of that “will they, won’t they?” tension and commit to them being together.

Yet, now that it’s become the popular trend to do it, and by and large this trend is proving the fate of the curse is the exception, rather than the rule, it could be risky not to have them together. Fans are growing frustrated of television writers who stretch out the chemistry for years, never letting it boil too hot, lest the characters might actually face their own emotion.

This is the era of character-driven stories, and in order for a show to fulfill its potential, the people on screen must grow and develop and change. Love is a powerful, driving emotion, one of the most important, and so it cannot be ignored, especially by a central protagonist. Thus, it is not only time, but necessary, to see if Annie and Auggie can work as a pair.

The primary problem between them, already evident in “Vamos,” is that Annie doesn’t listen to anyone or consider their opinions. She is head strong and rebellious. This is fine (sort of) when she is disobeying Joan (Kari Matchett) and the CIA because it’s not personal, and as long as she gets the job done well, they forgive her. But when feelings are involved, as they are with Auggie, it may present a problem.

Auggie likes Annie for her confidence and determination, but he hasn’t had that betray him so directly until now. He has faced it as part of his job, but not as a boyfriend. Being left alone in a foreign city or having her reluctantly agree with him, only for her to do the opposite that second he isn’t looking, isn’t the makings for a long-term bond. These are things they will have to work to overcome.

That being said, it’s great to see them out in the field together. Auggie doesn’t get out of the office enough, and in their current arrangement, it’s more believable that he will accompany her, especially when it’s not a stated mission. He is valuable support , and if she can learn to rely on him a little more, they will be a dynamic duo.

Annie is now working for Henry Wilcox, and that will be a problem, both for her, and for her friends. Henry has never been shown to be anything but up to no good. He is essentially threatening Arthur in “Vamos.” Who knows what he’ll ask Annie to do to help him take down his enemies? This is the makings for a difficult road for Annie, one where she will be torn in her actions between doing the right thing and fulfilling her obligations and protecting herself and others.

Of course, Annie put herself in this situation. She may have done it for the right reasons, but this is a decision she has made. Unfortunately, that makes everything a little contrived and a little predictable, which is what keeps COVERT AFFAIRS a bit inferior to, say, SUITS, which has more complicated characters. But it’ll still be fun to watch Annie run around and kick butt, the main draw of the show.

I’m not sure I completely buy Annie’s helping Arthur so vehemently. Is she doing it just out of loyalty to Joan or because of the guilt she feels for not always doing right by Joan? If so, this isn’t something we really see in this episode, which is a shame. Maybe Annie just wants to uphold justice, and that’s fine, but again, motivation isn’t really explored, and I feel like that’s a wasted opportunity.

There are a couple of other things that happen in “Vamos,” including a big “surprise” development for two main characters, and a step backwards for the good guys. I feel like this premiere is in keeping with the established quality of the show, and fans should be pleased, even if one can justifiably wish it kicked it up just another notch, such as not making who is bad and who is good so obvious, playing more in the shades of grey.