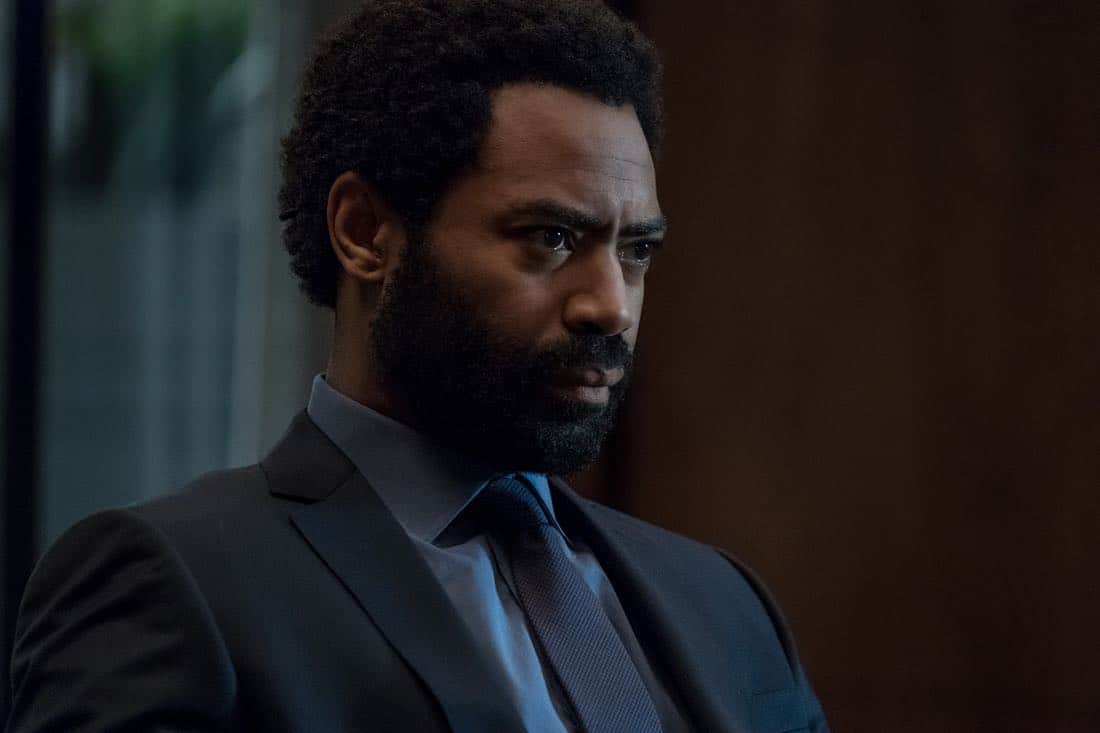 In the murky world of the Starz series COUNTERPART, there are two nearly identical worlds populated by doppelgängers, which makes it tricky for viewers to navigate who can be trusted and what their real motivations are. For Nicholas Pinnock that is part of the thrill. He believes his character Ian Shaw is doing everything for the right reasons, but as viewers have begun to see, the right side is dependent on perception. Who is to say that the interests of the Prime Side should outweigh those from the Alpha Side? No matter which side, it is a mind-twist to figure out who is who and what they are really up to. In an exclusive interview, Nicholas happily shared how he views Ian, the appeal and challenges of working on COUNTERPART, and his reflections on his career.

What appealed to you about portraying Ian Shaw and working on the Starz’s COUNTERPART?
NICHOLAS: The appeal was the premise of the show itself. The world that had been created was one I’d never explored before, and Ian was a challenge. The role frightened me, so it was a no brainer that I had to play it. Stepping out of your comfort zone. It’s the only way to grow and get better.

How would you describe who Ian is?
NICHOLAS: Ian is a straight down the line, no nonsense kind of guy. With him, everything is done by the book. If you know the difference between right and wrong and you cross the line, as far as he’s concerned: you made your choice. He’s an enforcer of justice who will hunt those who break it.

What do you most admire most about Ian?
NICHOLAS: The fact that he knows what’s what. That there’s no bullshit with him.

What was it like working alongside the talented ensemble on COUNTERPART?
NICHOLAS: I was spoiled. Working in an ensemble like this makes you up your game and is challenging. Plus, it’s a great line up of talent to be a part of.

Were there any challenges working on a show where the characters have doppelgängers?
NICHOLAS: Yes. Kind of. The challenges weren’t with the doppelgängers so much, but with the two worlds. Remembering which side we were on and what the protocol was.

As an actor, what has been the one thing you haven taken away from the experience of working on COUNTERPART?
NICHOLAS: The process was very collaborative. Justin Marks is extremely generous with allowing us to have input in the world he created and that comes with confidence from him in knowing that he won’t allow anything that doesn’t work to slip through the net, but when it does, he’ll gladly add on it. He and Amy Berg were very careful in that regard.

If there were one previous role you would like to revisit, which would it be and why?
NICHOLAS: I helped develop, was a producer and actor in a short film called “Closer,” which was originally born out of a music video pitch for singer/song writer JP Cooper. In that short, I played a man who was suffering a mental disorder and dealing with the loss of his marriage and their still born son. It was a great and important project and story that I’m hoping to turn into a feature film. You can see the short on Vimeo https://vimeo.com/149852796

What advice would you offer to other upcoming and aspiring actors?
NICHOLAS: Nowadays, it seems like the younger generation want it all now which is understandable as everything is so fast what with technology being what it is and they have everything instantly available at their fingertips and seem not to fully realize that it’s not always so easy. So, my advice would be: take it slow and work on your craft. Don’t focus on money. Don’t focus on getting an agent. Focus on being great at what you do. Not good, great.

Do you have any other upcoming projects that you can share that fans should keep an eye out for?
NICHOLAS: Sometime in May on Netflix, the U.S. will get Season 2 of MARCELLA and I have a film coming out in the summer called “VS.” It’s a great indie film.

Has there been any great advice you have gotten about working as an actor?
NICHOLAS: The best advice I got was from one of my mentors. She told me: not to look so groomed and polished when going to auditions. She said to go with a bit of an edge, a bit of the everyday. It worked. So I’ve done that ever since.

To see whether Nicholas’ character Ian Shaw will be an asset or is discovered to be even more deeply involved in the dangerous conspiracy, be sure to tune in for all new episodes of COUNTERPART currently airing on Sunday nights at 9:00 p.m. on Starz and, for more information about the show, you can follow the show on Twitter @counterpart_stz. Then to find out more about Nicholas’ future projects, be sure to follow him on Twitter @NicholasPinnock as well.